Why get an Australian Shepherd?

The Australian Shepherd is a high-energy dog that just loves to be kept working.

This breed is highly intelligent and is celebrated for its versatility and reliability as a working dog.

As a pet the Australian Shepherd would suit an experienced owner willing to invest time in training and stimulating this dog. Also any owner would need to be active as this dog requires a very high amount of exercise. 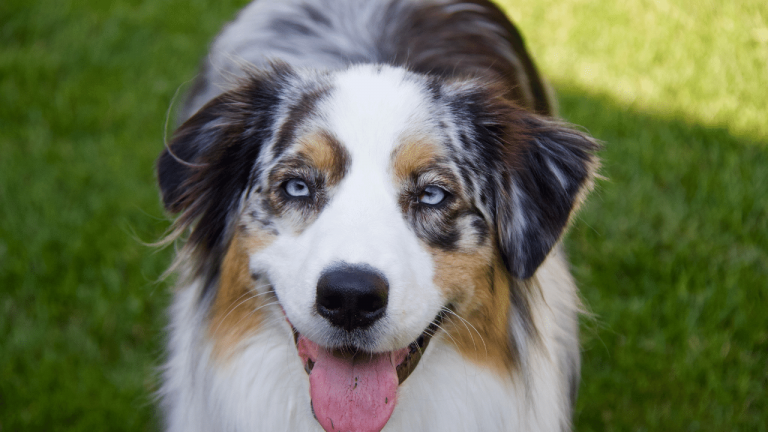 The Australian Shepherd is a herding dog that is highly celebrated and valued on working farms and ranches across America. But, like the Old English Sheepdog also in the Herding Group, its name is something of a misnomer.

The origins of the breed actually can be traced back to the mountainous borders between Spain and France were shepherds mostly Basque shepherds used a Pyrenean shepherd dog which was hardy and adaptable and so was able to work the difficult terrain with its inclement weather conditions.

The Basques called them ‘the little blue dogs’ and when some of them set off to colonize Australia in the early 1800s they understandably took these very capable dogs with them. From there it is thought that these dogs were intermingled with Australian cattle and sheep dogs, and possibly other imports such as the Border Collie to produce a herding dog ideally suited to the dryer and dustier climate of the Australian plains.

From there immigrants to America, largely to West Coast in the first half of the nineteenth century, once again brought these excellent working dogs with them where they became known as Australian Shepherds or affectionately as ‘Aussies’. At this point these dogs were further refined and developed and became firmly embedded in the frontier, cowboy culture.

Their talent in all manner of obedience and agility became further broadcast in the 1950s where dogs owned by Jay Sisler featured in touring performances and films. But it was until 1993, partly due to resistance from breed clubs who did not want the quality ‘working dog’ to be impaired by ‘show’ standards, that the AKC fully recognized this breed.

Since then this dog has remained a ubiquitous working dog, and is also an increasingly frequent choice of breed for a family pet. As a consequence they are ranked as the 12th most popular breed in the United States in 2021 based on AKC registration data [1].

The Australian Shepherd is a very impressive working breed and has proven this repeatedly in both obedience trials and agility competitions, as well as its skill as a herder in rural America.

Many ranchers and farmers look to this breed as the dog that ‘can do it all’. These dogs are superb herders and can manoeuvre animals as wide-ranging as horses, sheep, cattle, ducks and chickens. They are also superb at a whole range of tasks such as fetching and their talents have been successfully extended into areas such as trailing and search and rescue

The Australian Shepherd is a very bright and alert dog, but like the Border Collie with which it is sometimes confused, it is a workaholic and needs to be kept busy with a range of tasks to be fully mentally and physically stimulated.

If not a working dog this means owners need to invest time in providing an Australian Shepherd with lots of exercise including interactive play and puzzle toys and games. As many opportunities as possible should be taken to engage in obedience training both in classes and out in walks. This dog is highly intelligent and will relish the opportunity to display a range of learned commands.

In keeping with this dog’s Herding Group background the Australian Shepherd dog is very high-energy and constantly active. They would need to be agile in order to avoid any kicks from large animals such as cattle and horses and this attribute is reflected in their superlative record in performance sports.

Another trait gained from their tradition role of guarding a herd or flock is their wariness and natural distrust of strangers. They will also bark an alarm if unfamiliar people approach the home or they sense any fear or uncertainty from their family. This makes them excellent watch-dogs as they will generally not bark unnecessarily unless they are under-stimulated.

The Australian Shepherd is prized for being able to think independently but they are generally designed to work closely with humans. This means as pets or workers they tend to want to stick very closely to their human pack, which means they will shadow you around the house.

Although they work hard, the Australian Shepherd also likes to play hard. They are very gregarious with other dogs and will enjoy playing for hours. But, like all dogs they require a high level of socialization in order that they feel confident and behave towards dogs, children and other animals appropriately. In the case of the Aussie, this means being encouraged to understand that the aforementioned groups are not fitting subjects for herding, nor nipping at as part of steering them in a particular direction. With this in place they will be able to get on with smaller animals such as cats.

The intelligence and capacity for independent thinking means that these dogs require strong canine leadership to ensure they do not begin to take any form of control. This will allow them to become lovely family pets as well as effective working dogs. It is important in a family context to always keep these dogs with play or problem-solving activities.

For a very active owner or family, the Australian Shepherd offers an excellent choice. They are ideal for hiking, camping and even good jogging companions as they are vigorous and tireless. These dogs are also resilient and perfectly equipped for different weathers and climates.

But this dog is not a good choice if you live in an apartment. The Australian Shepherd needs a secure outdoor area in which to burn off its boundless energy.

It is worth noting that there is a show-line version of the Australian Shepherd which tends to have a longer/fluffier coat, as well as a slightly bigger and heavier frame.

These dogs do not like being without their human companions and can suffer from separation anxiety, so steps to make sure this can be mitigated or prevented should be put in place at as early an opportunity as possible.

For active owners with a lot of time to invest in exercise and training the Australian Shepherd makes for an excellent choice of dog.

An owner of a non-working Australian Shepherd will ideally be an experienced dog owner or somebody prepared to invest in hours of training classes and will enjoy giving their dog an opportunity to learn a huge range of commands and ample opportunity to practice them on walks and at home.

This dog is capable of being trained to a very high standard, although socialization should focus on teaching this dog not to herd anything that moves including cats and children.

These high-energy dogs will require something around 2-3 hours a day of walking if they are not working dogs. In addition, they would benefit from as much task-oriented play as possible such as fetch and puzzle games and toys to keep them mentally and physically stimulated.

The Australian Shepherd is a strikingly handsome dog with a pronounced stop leading to a rounded head framed by high-set drop ears. The expression is alert and inquisitive with eye colors varying between brown, blue and amber. The top-line is straight leading to a bushy tail if not docked to work with cattle. The feet are oval and point directly forward.

The Australian Shepherd does have above average grooming requirements. Ideally the coat should be brushed daily to remove dead hair and any matting. It is important to be aware that these dogs are frequent shedders and this can be heavy a couple of times a year.

The Australian Shepherd is a very healthy dog with good longevity. They generally live for around 12-16 years and they can stay very agile well into their teens.

They can be prone to overweight but general desire to be active should mean that this is not a problem. This breed can be prey to eye conditions such as Progressive Retinal Atrophy and cataracts. Some can suffer from hypothyroidism.