Why get a Beagle?

The 'merry' dog who loves his family, is gentle with children and has an amiable playful nature.

It is no wonder that this dog has been one of the most popular breeds over the last 20 years.

A vocal dog with a rich range of melodious sounds and a gentle endearing expression this dog is a real heart-breaker.

The Beagle can be mischievous and push boundaries so firm and consistent training is required. The result will be a wonderful pet firmly lodged at the heart of the family. 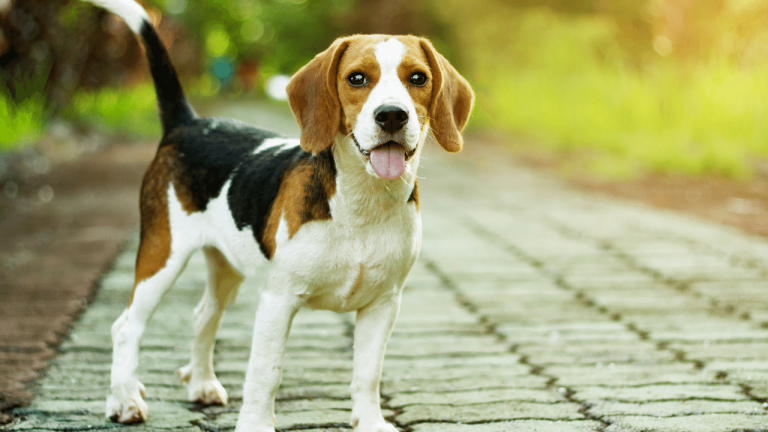 This dog, often referred to as ‘merry’ is a small to medium-sized dog who is thought to have been developed and refined from other scent-hounds such as the Harrier and the English Foxhound, and possibly some Bloodhound influence.

There are old paintings depicting Beagle-like hounds from the 17th century England as well as various written references to the ‘Beagle’. One speculation is that the word Beagle comes from French word ‘open throat’ referencing the sonorous sound of their baying in pursuit of their prey.

But it was not until the late nineteenth century that it was recognized as a distinct breed in England excelling through both its tenacity and athleticism in a number of obedience and field trials. It was about this time that this breed was exported to America where it quickly gained huge popularity. This has certainly been sustained to this day, and the Beagle has remained in the top 10 most popular dogs for the last 20 years and is currently placed in position 7 according to AKC registration data [1].

Originally this dog’s highly attuned sense of smell was employed hunting rabbits, hares and other small game. In more modern times Beagles have been put to work at airports and working in security as drug and bomb sniffing dogs. Impressively this breed are judged as having the second best sense of smell of all dogs, only slightly bested by the nose of the iconic Bloodhound.

The reason for this little scent-hounds continued popularity can be traced to the epithet commonly applied to it, namely ‘merry’. The Beagle is famed for its friendliness to humans, other dogs. This laid-back dog is very rarely aggressive and will throw itself into games with fellow canines at the park with gusto. Although if they detect an enticing scent they will break off any games put their noses on the ground, and their tails in the air in single-minded and devoted pursuit of its source.

The Beagle is a sensitive and tolerant dog which is absolutely excellent with children of all ages, although, as with all dogs, they should never be left alone with them unsupervised. A well-socialized Beagle will be very gentle and adopt a ‘soft-mouth’ in its play with smaller humans. This playful hound is a real family dog who likes to be at the centre of everything. Their hunting background means they are highly active and energetic dogs so can literally play for hours.

The Beagle is a cheekily comical and mischievous dog who likes to get his nose into anything. They are never happier than when they are exploring a rich bouquet of scents outside and funnelling up smells into their highly attuned noses. This means that they enjoy mental and physical stimulation around dog ‘treasure-hunts’ games where their olfactory capabilities are tested. These scent-hounds also enjoy stimulation provided by activities such as scatter-feeding giving them an excuse to run around the garden in ‘pursuit’ of their prey.

The Beagle is intelligent and mischievous with an independent streak. This means that they can be challenging and have a tendency to push boundaries on occasion. But with consistent training based around positive reinforcement they can be trained to a good standard. These dogs are very ‘foodie’ but are also prone to put on weight. Therefore, ideally, training methods should be based around praise rather than too many treats.

In terms of the independent streak it is highly important to ensure any yard or garden is fully secure as these dogs are excellent escapologists. In this they combine their intelligence and astounding athleticism as Beagles have been known to comfortably clamber over a 6ft fence. Also in keeping with their hunting background they are adept at digging.

As indicated by the history of their name, these dogs are indeed ‘open-throated’. The Beagle is a very vocal dog who will bark and whine conversationally with their owners. Although a small dog they are definitely at the loud end of the barking scale in the canine world.

This, of course, comes from their origins on the hunting fields of England. When closing in on the source of a scent on the trail they will emit a sound part bark, part howl (sometimes called a ‘barooh’) which would have alerted human hunters to the proximity of the quarry.

This trait has persisted in their role as family pets. They will also bark an alarm if anyone unfamiliar approaches the house although they are too friendly to tackle an interloper in the house. Sadly they are also known to howl if left alone and they do suffer terrible separation anxiety like many breeds developed to work alongside humans, and these pack-oriented dogs do suffer from separation anxiety. For steps to mitigate or prevent this distressing condition please click here.

Be aware that a Beagle might therefore not be an ideal choice if you live in an apartment; not only do they need an outdoor space but also the loud ululations may well upset neighbours.

As noted above the Beagle may occasionally exhibit challenging behaviors but are generally able to be trained to a very good standard.

The priority in their training should be preparing them to be alone in order to mitigate or prevent separation anxiety.

In keeping with the independence of scent-hounds these dogs will also have a natural tendency to pull on the leash. Consistent training to encourage them to heel can help their owners not being dragged unwillingly on to the scent trail. Also these dogs can be trained to walk off-leash.

This dog loves to explore so recall training should be prioritized to ensure that this dog will not disappear into the distance on a walk.

The Beagle is a high-energy dog who requires a high level of exercise. This should include at least one long walk a day of between 1 to 2 hours. As well as plentiful opportunities to explore off the leash.

The Beagle is a compact little dog with silky long ears framing a head with a square muzzle and distinct stop. On the forehead, the Beagle sports a distinctive white blaze. The almond-shaped brown eyes have an endearingly friendly and playful expression. In keeping with a scent-hound the long ears have the advantage of helping to snag the scents and funnel them into the nose.

The short back is level with a rope-thick white-tipped tail which is generally carried low until the Beagle is on a scent and then it is raised almost horizontal with a slight curl.

These dogs do have the unfortunate tendency to shed frequently but aside from this the coat is short and easy to maintain, only requiring occasional brushing.

The Beagle is a healthy dog with a lifespan of around 12 to 15 years. As they grow older they can be susceptible to cancer and coronary heart disease. Some of the breed can also be prone to epilepsy and hypothyroidism. Beagles have a tendency towards becoming overweight as they are very food-oriented.