Belgian Malinois (aka The ‘Mali’)

Why get a Belgian Malinois?

The Belgian Malinois is both quick on paws and in mind. This dog has both unbelievable agility and pace but is also hyper-trainable and very intelligent.

Sometimes confused with the German Shepherd, this dog is now becoming increasingly favored in police and armed services across the world.

A super athlete of the canine world the Mali is currently enjoying a surge of popularity also in the home.

But be aware that this dog will only suit very active owners. This dog will need as much training, play and exercise that you can throw at it (literally in terms of a ball or Frisbee). But with this in place, this dog will make a devotedly loyal companion. 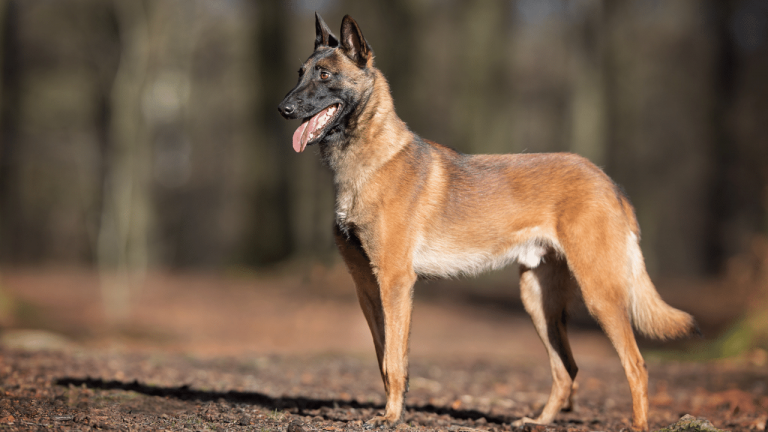 As suggested by their appearance in the Herding Group the Belgian Malinois emerges from the farmlands and fields of Belgium. In the late 1800s, there are around four distinct breeds of Belgian Shepherd dogs all of which were prized for their skill working closely with shepherds in herding sheep and driving cattle. But unlike in other European countries, there had been no drive to offer a ‘show’ dog version of any of these breeds, nor to invest one of them with the title of ‘national dog’.

But this began to be initiated late in the nineteenth century. In 1885 a dog-enthusiast and shepherd called Adrian Johannessen pioneered an early attempt to harness the full potential of these impressive dogs and refine a breed standard. He chose these dogs mostly on their capabilities but also selected the short-haired strain of dogs.

This breeding project offered the platform for the development of the Belgian Malinois breed that we know and love today. It may well have helped Professor Reul in 1891, as he was tasked to categorize the native Belgian breeds of dogs, and found that the short-haired dogs working the farms and fields around the city of Malines did offer a distinct group, all sporting the trademark light fawn coat.

From here a club was founded also in 1891, and this dog became officially known as the Belgian Malinois. This organization began to explore how this dog’s roles and popularity could be diversified and finally the many talents of the Mali started to be showcased in obedience and agility trials.

This versatile and robust breed soon caught the attention of the Belgium Police Force which began to harness their capabilities and with the onset of the WW1, these dogs joined other hyper-trainable breeds such as the Doberman Pinscher, German Shepherd and the Rottweiler on the battlefields of France as guard dogs, messenger dogs and even used for locating injured soldiers.

Although these dogs did begin to trickle over to the States in the early nineteenth century, following the world wars, the impressive performance of these dogs led to their wholesale export to the USA and they have since become very established. In recent years the Belgian Malinois has enjoyed a meteoric rise in popularity soaring from 60th most popular dog in 2014 to its current position of 37th according to 2020 AKC registration data [1]. Some of this popularity stems from the fact that they are now numbered among the top 10 dogs chosen as guard dogs.

This ability has now been further developed in modern times to make the Belgian Malinois an incredibly skillful search and rescue dog. Although the German Shepherd is sometimes known as the king of the dogs, we could arguably view the Belgian Malinois could be seen as an ambitious and capable pretender to the canine throne and has begun to feature prominently as an alternative to the German Shepherd in police forces and armed services across the world.

This is reflected in the United States, for example, that this versatile and athletic breed is now the dog of choice for service in the Marines and the Navy Seals. They have also proven a very able search and rescue dog. It is also important not to forget that they also still excel in their original role as herding dogs and are placed on par with the Border Collie and the Australian Shepherd Dog for their capacity for independent thinking as well as speed and efficiency.

The Belgian Malinois is celebrated as a joy to own. These dogs are delightfully adventurous and inquisitive as well as being fiercely loyal to all members of their human pack. Despite being fearsome guard dogs, this is another breed that when at home becomes a relaxed and gentle pet dog with a balanced temperament.

These dogs are also tolerant and so therefore excellent with children, although as with all dogs this must be monitored by an adult. But due to their natural exuberance, their play can be very lively, so interactions with small children must be very closely supervised to avoid accidental injury.

The Mali is also gregarious and enjoys showing off its incredible agility and speed in play with other dogs in the park.

These dogs are very high-energy and will need very active owners who are not only prepared for long walks, hikes, jogs, and even cycle rides but also invest time in their training and interactive play. These dogs will also happily trot alongside a bicycle for many miles.

The Belgian Malinois ranks among Herding Group dogs, like the Border Collie and the Australian Shepherd, as work-a-holic breeds who are happiest when they are being given jobs and tasks to complete. So they will revel in any form of ‘treasure-hunt’ or search games. On a walk, an owner would also do well to ‘throw in’ fetch games involving balls and Frisbees, as well as pulling and tugging games to keep this dog constantly entertained and on its paws.

These dogs were bred to work at close quarters with humans, and as pets love to be near their human owners at all times, and will form very close bonds with all of their family members. Prepare yourself for an incredibly acrobatic greeting when you return home from work. The Belgian Malinois does not do well when left alone, so it is very important to prepare them for being alone through socialization and training. But they will do best in households where there is usually some company.

As with many other Herding Group and Working Group dogs with a herding background, such as the Rottweiler and German Shepherd, the Belgian Malinois has a deeply ingrained guarding instinct embedded through the protection of sheep and cattle. This makes it an excellent guard dog. This dog can be a formidable adversary for anyone, able to run at an intruder at incredible speeds and clamp down upon them with its powerful jaws.

But very importantly they are highly trainable and biddable dogs who will always focus on their owners for guidance on how to deal with a situation involving a potential threat. This is also true in less extreme circumstances making them a joy to take out to the park. A well-trained Malinois will turn heads with both its obedience and willingness to please its owners. This means this highly energetic dog can be exercised off the leash as their recall is excellent.

The Belgian Malinois is highly recommended for an experienced owner with knowledge of training a dog, who can invest time in both their exercise and interactive play. This dog is not only quick on its paws, but also is quick of mind and excels as a highly intelligent and hyper-trainable breed.

A novice dog owner would need to be very active, and ensure attendance at training classes to ensure this dog is receiving the support, care and high level of mental and physical stimulation required.

These dogs are generally not the best friends for felines as they are both high-energy and also can have a strong prey drive. But if introduced to them as a puppy with careful and sensitively structured training and socialization it is reported that they can live relatively harmoniously with cats.

The Mali is quite a large dog, so potential owners will ideally have interior space, as well as a secure outside area in order to provide the room for this high-energy dog to play and run around in. This means that it is not a breed generally suited to apartment living.

The Groenendael, Tervueren, and Laekenois are the three other closely related Belgium Shepherd breeds. Also the Bouvier de Flandres and some Dutch Shepherd Dogs are believed to have common ancestral roots to this breed.

For an overview of the breeds in the Herding Group please click here.

It is arguably impossible to better the Belgian Malinois breed in terms of both intelligence and trainability. These dogs are able to learn a range of commands very quickly and will constantly need to be stretched and challenged to their full potential in order to be kept mentally and physically stimulated.

Due to their liveliness and adventurous temperament, initial training should certainly foreground recall training. Also, as noted above, these dogs do not do well if left alone. It is therefore very important that training to mitigate or prevent separation anxiety is put in place at the earliest opportunity.

But be aware that this excellent breed can also be sensitive to correction, so ensure that an approach based around positive reinforcement is in place. For more information on the benefits of this approach please click here.

Their potential in obedience training is fully reflected in the fact they are often the service dog of choice in US armed forces, such as the Marines and the Navy Seals. They also consistently excel in obedience and agility trials including Schutzund (involving protect dog trials) and the French Ring.

This highly active dog will happily take as much exercise as you can offer and will highly enjoy any fetching, searching, or tugging games that you can organize on a walk.

For further stimulation, you could also incorporate mini-training sessions into your walk to keep the Belgian Malinois both physically and mentally stimulated. Any form of tugging or fetch games should be offered as much as practically possible to intensify exercise for this tirelessly energetic breed.

The short-haired Belgian Malinois is distinguished from the German Shepherd most easily by the light fawn-coloring on the body being in contrast with the black mask on the face. The flattened skull and long muzzle gives an impression of handsome elongation, with only a medium stop to the head which is set with brown almond eyes usually holding an expression of inquisitive alertness.

The straight topline leads to a slightly bushy tail which is generally held raised in an arc when on the move. The dog usually has square proportions being about as long as they are tall with lean muscularity to the body and powerful hindquarters yielding sudden bursts of pace as well as powering incredibly acrobatic leaps into the air.

The Belgian Malinois is a short-haired variant of the related Belgian Shepherd Dog breeds. This means it is generally low-maintenance but the fine hair does have a tendency to shed throughout the year. This means that a daily brush is recommended to remove any build-up of dead hair.

The lifespan of this breed is usually between around 11-14 years.

This dog is a very healthy breed and does not have any specific health concerns.

Some of this breed have been known to suffer from Progressive Retinal Atrophy and cataracts as well as hip and elbow dysplasia.

The Belgian Malinois can also suffer from bloat so it is important to manage their feeding times and ensure at least an hour between meals and exercise (both before and after), particularly as these dogs are so frenetically active. Even better if it is possible to offer food in 3 or 4 smaller portions during the day instead of two large meals.