Why get a Bloodhound?

This super-sleuth scent hound has the best nose in the business. With patient and consistent training the Bloodhound also makes for a wonderful family dog.

Bloodhounds are kind and gentle in their temperament and have a reputation for being great with children. They are also eager to please their owners and are very affectionate towards the human members of their family.

An added bonus of this particular hound is that the grooming requirements are very minimal.

If you are looking for a large and friendly dog then the Bloodhound is certainly not to be sniffed at. 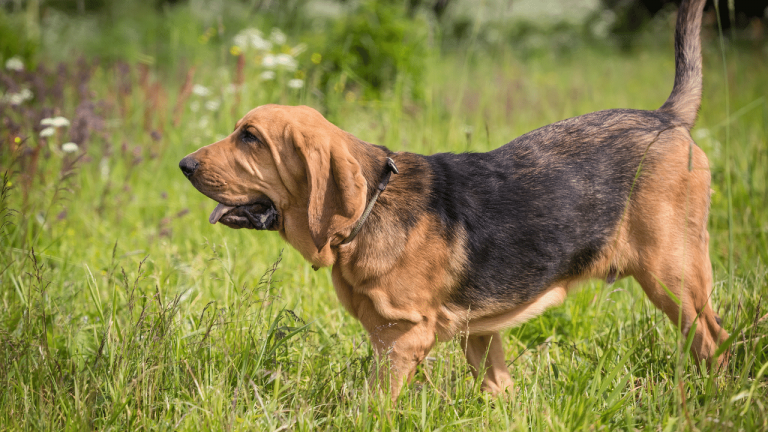 There is no questioning that the speed and size of Sight Hounds such as the Greyhound and Irish Wolfhound in the dog world are impressive.  But having the best nose in the whole of the canine kingdom is also not to be sniffed at. Enter the iconic Bloodhound.

The word ‘sleuth’ comes from old Nordic for a ‘track’ or ‘trail’. The Blood-Hound, or ‘Sleuth-Hound’, is able to follow scents that are over 100 hours old. This makes it the best detective dog out there. No wonder that a Bloodhound was recently conscripted to assist the most famous ‘sleuth’ of all.  In the recent Sherlock Holmes series it is a Bloodhound who teams up with Benedict Cumberbatch [1].

The name Bloodhound may not be as gory as it first sounds.  Received opinion states that this refers to their ‘well-blooded’ or aristocratic owners.

Originally from Belgium, the forebear of this dog was named the St. Hubert Hound.   Developed by monks, this dog had the honor of being named after the patron saint of hunting.  This breed quickly spread throughout France.  They were then reputedly brought over to England by William the Conqueror in 1066 and were used largely to track large game such as deer and wild boar. Although they did already have an early enforcement role in medieval society.  These dogs are documented as being used by curfew-men and sheriffs so they have a long history in pursuing felons and bringing criminals to justice.

Since then references to the Bloodhound pepper the pages of British history. They are recorded as being used in the hunt for Robert the Bruce and William Wallace, early heroes of the fight for Scottish independence, as the English attempt to quash the Scottish rebellion towards the end of the 13th century.

Indeed Bloodhounds are still employed in various law enforcement agencies in the States.   Their tracking or ‘sleuthing’ expertise are still highly respected.  Indeed a Blood Hound’s recognition of scent remains permissible as court evidence [2].   They are particularly valued in search and rescue operations and are directly responsible for rescuing a number of adults and children.

The Bloodhound is also playing its part in the noble enterprise of animal preservation in Africa. These scent specialists are being used to track down poachers and prevent the cruelties of hunting magnificent creatures like the elephant and rhinoceros for ivory.

These dogs represent a triumph of specialization.  Their noses are packed with around 300 million scent receptors (compared to around 6 million in humans).  Their wrinkled skin and hanging ears are all employed in dragging up scents.  These smells are then funnelled up through the Blood Hound’s long muzzle.

The Bloodhound also appears in a range of novels and stories including one of the most Gothic of the Sherlock Holmes stories, the Hound of the Baskervilles. Also in the novel by Charles Dickens the escaped convicts are pursued by these sleuth hounds.

But this very iconic dog is most commonly now a beloved family pet.  They rank as the  46th most popular breed in the USA according to the AKC’s 2020 rankings [3].

This big and brilliant Scent Hound is a very relaxed and easy-going dog . This makes them an excellent family pet.  Children must learn to treat all dogs with absolute respect but the Bloodhound has a reputation of being very tolerant towards small children. They do enjoy a good game and are playful although this is not always sustained for as long as other breeds. But get them on a trail outdoors and the Bloodhound will happily roam for hours trailing any interesting scent that it can find.

Bloodhounds are also very sociable with other dogs, but some do have a high prey-drive.  This means socialization is key to ensure they don’t try to ‘course’ or ‘trap’ smaller dogs. Bloodhounds are reported as usually being able to live with cats and other small animals but a consistent and careful introduction should be put in place to mitigate any tendency to chase, pursue and potentially slobber on any resident felines.

Also these dogs have a natural tendency to pull on the lead in keeping with their traditional role of taking the lead in a hunt.  This makes them unsuitable for frail or elderly dog-owners. It is worth noting that the choice of collar or leash is particularly  important for this breed. Also be aware that  these dogs sometimes drool.

The Bloodhound may also not be entirely suitable for the house-proud. This dog has a natural instinct to chase around, sniff out and uncover objects of all kinds. This means that they can do a lot of damage and cause a lot of mess in any home when they are not closely supervised.

Much like other large Hounds, such as the Irish Wolfhound, these dogs have a very laid back and friendly character. This does not make them the best guard-dogs. But it does make them a good choice for first-time owners who can commit to the exercise requirements.  But they do have an impressive vocal range.  The Bloodhounds unique combination of baying, howling and barking is almost choral.

These dogs are very trainable. But the high prey-drive can mean that they will sometimes become distracted.  Unlike other service dogs, the Bloodhound is takes the lead on any trail. This is reflected in them having quite independent and confident spirits. This means leash training should be a priority to mitigate any pulling as these dogs are large and strong.

Another focus for these dogs will be recall. The Bloodhound will relish the mental stimulus of being allowed off the leash to investigate and track the bouquet of scents around them. But they become so focused on the scents that they are not always reliable in coming back to their owners.

But Bloodhounds are very human-oriented and eager to please their owners. The use of positive reinforcement  in consistent training is essential. This will result in generally biddable and well-trained dogs.

These dogs love to chew and can be destructive without house-training.  This can also happen during the owner’s absence.  Training to mitigate separation anxiety training should be prioritized. It is recommended that you  provide a Bloodhound with hefty chews and toys.  This should keep them occupied and calm.

These large hounds are active  and need a good level of exercise. A Bloodhound needs at least 2 hours every day of walks.

A long, narrow head with pendant ears, which curl inwards, and loose, wrinkled skin about the face and neck. The apparent solemnity of expression is further emphasized by the heavy upper lip and deep-set eyes but their expression is unmistakably kind and gentle.

The Bloodhound’s back is straight leading to thick tapering tail on a compact and sturdy body.

The Bloodhound’s coat is short and low maintenance. They need brushing around 2 to 3 times a week and shed only once or at most twice a year. The grooming needs of this dog are minimal and they require only an occasional brushing.

But as with the Bulldog they have facial wrinkles which require consistent cleaning [4]. The large pendulant ears also need a regular clean to prevent the build up of bacteria in the ear canals.

This breed has a good lifespan for a large dog generally between 10 and 15 years. But, as a bigger breed, they can suffer hip and  elbow dysplasia. Owners should try to avoid too many slippery surfaces in the home.  This will prevent injury or extra strain on joints.   Their hanging or pendant ears are also liable to infection.  Regular checking and cleaning is essential.

Bloodhounds are also prone to suffer from bloating. Also entropion, where the eyelids roll inwards, can cause pain and vision-related issues. A dog squinting or repeatedly holding their eyes closed are early signs of this   but it is treatable through surgery.