Why get a Boerboel?

The Boerboel is the result of many generations of breeding large, powerful and intelligent dogs who offer the complete package in terms of guard and protection dogs.

Off duty this is dog has an even and gentle temperament and is devotedly loyal to all members of its human family. 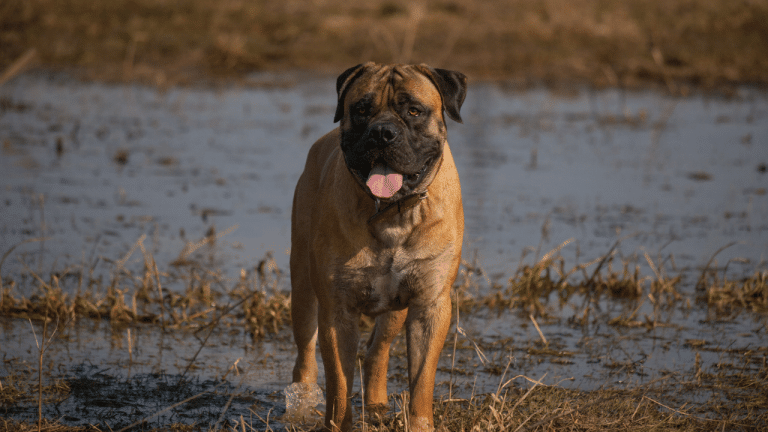 This magnificent Mastiff represents a culmination of centuries of intermingling large and healthy Bulldog and Mastiff breeds to guard the farms and homes of colonizers in South Africa.

Indeed in the Afrikaans language ‘Boer’ means farmer and ‘Boer’ translates to dog. So the Boerboel is a dog bred to roam large areas protecting territory and livestock from incursions by both wild animals and human intruders.

A Dutch colonist named Jan van Riebeeck is named as a founding figure for this breed in bringing over a large number of the big dogs from Holland in 1652 as a means of protecting trading posts from the wild animals. These Bullenbijiters (or Bulldogs) also had the added benefit that they could herd cattle, and it is thought that this function was further enhanced through breeding with indigenous African herding dogs.

Over the next couple of years it is thought that further interbreeding with English Mastiffs and Bullmastiffs brought over by British colonists also contributed to the gene pool. Some sources also cite the lion-hunting Rhodesian Ridgeback may also have been an influence.

This combination of Mastiff and herding dogs has produced a breed with brains as well as brawn lending the Boerboel the versatility and intelligence to both protect and herd cattle on the sprawling ranches being established.

Sadly, the historic role of the Mastiff, as exemplified in the history of both the English Mastiff and the Cane Corso, as a hunter of large beasts of prey was also taken up by the South African Mastiff.

The Boerboel was also put to this purpose in the veldts of South Africa hunting large game including big cats such as lions and leopards. There are even reports of a pack of Boerboels taking down elephants. Other unfortunate quarry included hyenas and baboons.

Indeed one story reports that the tails of this breed were initially docked to avoid being pulled upon by the latter. But it is more likely that the main reason was their function as cattle herding dogs that led to the removal of their tails.

This is in keeping with the traditional docking of other cattle driving breeds such as the Rottweiler in German and the Old English Sheepdog in England, to avoid painful injury should their tails be trampled upon.

This very regrettable and bloody chapter of the Boerboels history came to an end when the large and magnificent beasts were hunted into local extinction in large areas of South Africa near the newly established colonies.

In modern times the Boerboel has become largely used to fend off human threats such as rustlers and cattle thieves. Indeed their role as effective guard and protection dogs, alongside being doting and gentle canine family members, is very reminiscent of the traditional role of the Bullmastiff in England.

As a breed the Boerboel is not currently recognised by the FCI. But in 1983 the Kennel Union of South Africa was the first to officially recognise the breed and since then they have been a centrepiece at shows in South Africa ever since.

As this breed became increasingly valued in the United States the AKC followed suit in 2015, placing these dogs alongside other Mastiff breeds in the Working Group. The United Kennel Club also recognized this breed in 2016.

Like all Mastiff based breeds, Boerboels are indomitable and courageous in their roles as protectors but at the same time loving companions for the family.

Although suspicious of strangers naturally, once they see that you are welcomed by their owners you are actually much more likely to be licked to death than be physically attacked by this highly biddable and naturally people-oriented breed. Indeed, the fact that Boerboels have been used as therapy dogs is a testament to the gentle side of this dog.

It is no surprise that the Boerboel, bred for centuries for protecting livestock and property, is a very alert dog that is sensitive to anything out of place and will readily bark an alarm if they either hear or see anything unusual.

The Boerboel is generally gregarious with other dogs in the same household but males can be dominant towards other males and this can occasionally lead to aggressive behavior.

Very much like the Bullmastiff, the Boerboel will flourish most in a home environment with outdoor space. This will satisfy the propensity of this dog to patrol and guard their territory offering not only motivation for this mastiff to exercise but also mental stimulation in checking and exploring scents, noises and activities to ensure all is well.

As this dog has a herding background, the Boerboel is also celebrated for its brains as well as brawn. This means that the South African Mastiff can be trained to a good standard and will enjoy routine obedience training drills.

For an overview of the breeds in the Working Group please click here.

The Boerboel is a dog that needs early socialization to ensure they get used to people in a variety of situations. This means that this very powerful dog will be calm, confident and biddable as they transition to adulthood.

The Boerboel will ideally have an experienced owner able to show strong canine leadership to this dog. This will ensure that this powerful dog becomes a good canine citizen both inside and outside the house. This means proactively entrenching obedience and manners through consistent training.

Like other Mastiff based breeds these dogs may be large but they are also very sensitive. It is essential that any training is based largely around positive reinforcement to ensure this dog has the emotional foundation to be a successful family dog. This dog will not respond well to harsh correction and this will run the risk of disastrously creating a confused, anxious and even aggressive dog unable to live in a family environment.

The Boerboel is traditionally a herding dog as well as being bred for protection. This carries with it a level of intelligence, versatility and trainability. This dog will therefore do very well in any training class, and like the Cane Corso is celebrated for lacking the traditional Mastiff trait of stubbornness.

The South African Mastiff will actively enjoy obedience drills and mentally stimulating games such as treasure-hunt or ‘find-it’ challenges in the yard.

The delightful Boerboel is a dog that is certainly capable of working and exercising very hard, but they are also happy to rest hard.

This makes a well-stimulated Boeboel a very calm and low-maintenance member of the family.

It is recommended that this dog receives around 1.5 to 2 hours of exercise each day to be kept in good physical condition as well as to receive the necessary mental stimulation for this intelligent Mastiff.

It is highly advisable that the Boerboel which is a relatively active Mastiff, is kept lean in order to relieve pressures on the heart, ligaments and joints that are exacerbated by weight gain.

The Boerboel has very heavy musculature and all the broad and robust features typical of a Mastiff breed.

The Boerboel has a short sleek coat of varying shades running through the colors of yellow, red and brown. Some are brindle and this is acceptable within the breed standard. Like the English Mastiff many have a dark mask to the face.

The coat care is very minimal with only an occasional brushing required to remove dead hair and circulate natural oils around the skin.

These dogs will also benefit from being bathed around once a month to keep this dog clean, healthy and to remove the build-up of any odours.

The lifespan of this breed is usually around 12 years.

As a large Mastiff breed unfortunately this dog can be prey to hip and elbow dysplasia as well as Coronary Heart Disease.