Why get a Border Collie?

How often do you find the combination of high intelligence with incredible athleticism? Well, one answer might be every time you meet a Border Collie.

In its herding role this dog could command with just a look. And that is not the end of its many talents. A champion canine skateboarder called Jumpy numbers among this breed, arguably representing the best example of a 'Boarding Collie'.

This dog can be a wonderful companion and a brilliant pet. But a potential owner must be willing to invest time in ensuring this extremely talented dog gets all the time and stimulation it deserves. 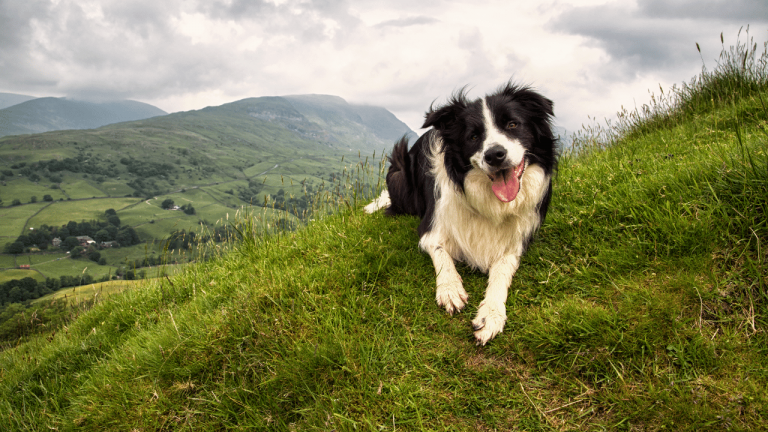 Wherever sheep dot the verdant undulating fields, it is likely that the Border Collie is not far behind. This impressive breed is the quintessential herding dog.

It was a dog called Hemp who blazed the trail for the Border Collie in 1873 at the first sheepdog trials.  This dog displayed such consummate skill in herding that he became a seminal reference for methods and standards.   The celebrated Hemp went on to sire many puppies.  It is claimed that all purebred Border Collies today can trace their ancestry back to this illustrious forebear.

Hemp offered an early example of the Border Collie’s ability to control sheep through posture alongside ‘herding eye’ or “strong eye”.   This was a far more gentle and less unsettling approach for nervous herds.  As a consequence, it proved very effective.

The Border Collie showed itself to be incredibly attuned to the shepherd.  These dogs are responsive to a range of whistled, gestured, and vocal commands.  But this high level of obedience is combined with independence and initiative.  This means that a Border Collie is able to range ahead half a mile on its own.  It can then problem solve autonomously in order to shepherd flocks and herds to the desired location.

Like the German Shepherd, the skills of the Border Collie are transferable. Border Collies have also been used as search and rescue dogs.  Blitz, a Border Collie in England is just one example of this talent.  He saved a woman who had been missing for two days [1].

This dog quickly gained a triumphant reputation as a sheepdog in obedience trials. But since then its virtuoso brilliance has extended to other athletic achievements.  This includes Jumpy, who might arguably be titled a champion ‘Boarding Collie’.   Jumpy is a world record holder for canine skateboarding [2].

Generally categorized as sheepdogs, it was not until 1915 that we have our first record of dogs identified as Border Collies.  Around this time this dog had made its way across the Atlantic to the States.

The first part of the name more obviously refers to its prevalence on the farms and hills around the Borders of England and Scotland. The etymology of  ‘Collie’ is a little more contested. Some speculate that it comes from the Scottish Gaelic word for ‘useful’.  Others say that it refers to ‘collie’’ which means black or coal.  Interestingly the German word ‘Kuli’ or worker may also have some correspondence or association.

The Border Collie was officially recognized by the AKC in October 1995.

This breed is arguably the closest thing in the dog world to a workaholic.  Although the Border Collie can both work and play hard.  The busier you keep this dog, the happier your canine pal will be.

These dogs are goal-oriented so devising seeking and fetching games provides great stimulation.  Treasure hunts or other problem-solving games in and outside of the house will keep a non-working Border entertained.  As will throw and fetch games like frisbee and flyball.  What about a skateboard? You might have the next Jumpy on your hands.

An under-exercised or under-stimulated Border Collie can exhibit destructive behaviors.  These might include chewing in the house or digging in the backyard.  Be aware also that these dogs are clever to the point where they can open doors and gates.  Ensure all outdoor spaces are fully secured against a daring and ingenious escape.  These dogs are not suited to apartment-living.

The Border Collie is a fantastic family dog and is tolerant of small children.  If you want to tire out your children this dog will fully oblige.  This Collie will be happy to spend endless hours of supervised play.

This breed will get on with other dogs but is generally much more human-oriented.  If a ball or stick is available to chase they are prone to be much more interested in this than cavorting around with their fellow canines. This also reflects their fierce loyalty towards their owners. A well-exercised and stimulated Border Collie makes for a wonderful, doting companion.

The Border Collie is very eager to please.   These dogs are also good with smaller pets.  But if not socialized correctly they can sometimes attempt to herd smaller dogs and cats.  Not even the brilliant Collie can herd disgruntled cats, so this will leave both parties feeling aggrieved.

This breed would better suit an experienced owner. A first time dog owner would need to be prepared to attend regular training in order to learn how to keep this dog fully stimulated and happy.

These dogs have a very high level of discipline.  This makes them absolutely excellent companions and watchdogs.  They will bark an alarm but only bark for a good reason.  This dog will rarely yap unless they are under-stimulated or suffering from separation anxiety for which training should be put in place as early as possible.

As with its companion in the Herding Group, the Old English Sheepdog, heterochromia can occur in this breed.  This is where a dog has differently colored eyes.  It has absolutely no impact on the quality of their vision.

The Australian Shepherd Dog has a very similar appearance to the Border Collie and this can lead these dogs often being confused.  But there is no clear, documented relationship between the breeds although it is very likely they shared similar ancestry.

The Border Collie is a little sensitive so a training regime based around positive reinforcement and praise is incredibly important. This dog is widely celebrated for its mental acuity, particularly since Stanley Coren’s study of the relative intelligence of the different breeds where it was ranked as number one [3].

This means the Collie is hyper-trainable and will excel in all obedience and agility trials. But it also becomes incumbent on an owner to keep this dog constantly stimulated with games, interactive play and a range of challenges which will do justice to this dog’s potential.

The Border Collie also thrives on plenty of exercise.  Around 3 to 4 walks are ideal for a dog that in its tradition working role can blithely run up and down hills for hours.

Everything about the Border Collie is suggestive of keen alertness and tremendous agility. The body is lean, muscular and athletic with a slightly arched back leading to a tail generally carried low. The face is marked with a distinct stop. The ears slightly cocked adds to the impression of vigilance.

Their coats come in rough and smooth varieties.   The rough coat is slightly longer and more wavy with some feathering under the belly, legs and chest.  As the name implies it also has a coarser texture.

Both coat types are  relatively low-maintenance.  They require only a weekly brushing but nails should be clipped every two months and pads checked for abrasions.

This healthy breed has a lifespan of around 11-15 years.  Some health problems that occur in this breed include hip dysplasia and PRA (progressive retinal atrophy).  Also occasionally epilepsy and seizures and hypothyroidism.