Why get a Boxer?

It is an apparent truism that once you get a Boxer, no other breed will do. In other words this Boxer is a real knock-out. A dog that is not physically strong and athletic, but also with a very powerful personality.

This dog is a little self-willed inheriting some of the Bulldog stubbornness. But at the same time is very loyal, intelligent and highly trainable.

Puppy-like long into physical maturity, brace yourself for years of unremitting fun and playfulness if you opt for this breed. 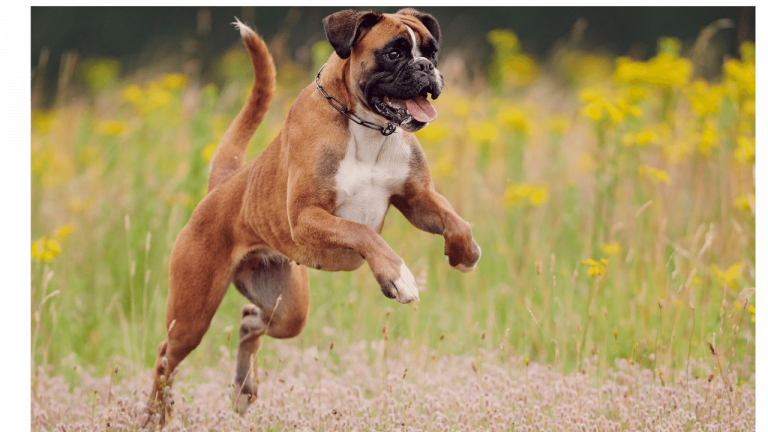 The Boxer developed in Germany in the 19th century as bull-baiting dogs and as farmer’s dogs helping to drive and control cattle on their way to markets. They were also prized as hunting dogs having a similar function to fellow German breed the Great Dane as ‘catcher dogs’. These dogs essentially provided the muscle to bring down large prey, such as Boar, once spotted and surrounded by the sight hounds, delaying any escape for the unfortunate victim before the arrival of the hunters.

There are a couple of different theories regarding the origins of the Boxer. According to some, the modern day Boxer is a descendant of the Danziger Bullenbeisser and the Branbenter Bullenbeiser, two breeds which are now extinct except in being founding breeds of the Boxer.

This is, however, disputed and another theory is that the Boxer was mostly bred from an early combative version of the Bulldog and the Bull Terrier, both of which were also used in the cruel sport of Bull Baiting.

A middle ground suggests there is some truth in both accounts and the Bullenbeisser breeds were crossed with Bulldogs, Bull Terriers and even possibly Mastiffs to give them some added bulk.

Whatever the exact truth, it is undeniable that the final result is an impressive and versatile breed that has proven its worth in various arenas. The Boxer was reported as being utilized as early as 1900 in both the police and the military in Germany. This was reflected in the Great Wars where along with other hyper-trainable dogs such as Rottweilers, German Shepherds and the Doberman Pinscher, the Boxer served with the German army as messenger dogs, as well as effective guard dogs.

Unsurprisingly they continued to be used in various services. They are commonly used in Europe as police dogs, although this has now waned in the States. Some can still be found on farms as capable herding dogs

These dogs are essentially intelligent and adaptable all-rounders able to turn their paws to almost anything. This includes being a beloved family pet, and the Boxer continues to pack a real punch in the popularity rankings appearing 14th most popular breed according to AKC 2020 registration data.

Boxers are intelligent, loyal and devoted companions. Many Boxer owners claim that once you own a Boxer you will be smitten with the breed and never think about owning another dog. They are particularly celebrated for their clownish antics and sense of fun during a very prolonged puppy-hood.

But that is not to say that this dog does not also have a serious side. As a former ‘catcher dog’ bred to take on prey larger than itself, it comes as little surprise that the Boxer is a very confident dog, with a reputation for being fearless inheriting the ‘Bulldog Spirit’ from its stout little forebear. Added into the mix is the tenacity and drive of the Terrier influence.

The Boxer is a very energetic and athletic dog with a high prey drive. This means that you can expect this dynamic dog to boisterously chase and run around. Some of the breed will go after small animals on a walk and this combined with an inquisitive nature means that they love to explore. This means recall should be an important feature of the training regime.

The Boxer can live with cats if introduced to them as a puppy but an older Boxer unused to feline friends has a chance of being problematic.

This breed make absolutely wonderful family pets. Boxers are people-oriented dogs and they will do anything to be with their families. Unfortunately, they do not cope with being alone for prolonged periods of time and so training should be put in place to mitigate separation anxiety.

They also have a reputation for being canine comedians with a real sense of mischief. This impression of their temperament is only intensified by the fact that the Boxer takes a relatively long time to mature not developing an fully adult temperament until the age 3.

But even as mature dogs they do not lose their absolute love of play. They are also very gentle and extremely patient with children, although as with all dogs this play must always be supervised. Also their easy-going personality means that most Boxers are easily able to cohabit with other dogs.

This very athletic dog who would suit an active owner and they make ideal companions for intense walking, hiking and jogging. They are also highly protective dogs who will also bark an alarm if strangers approach and are ready to tenaciously defend any of their human pack.

But not only are these dogs adventurous outside, but they are also celebrated as clean dogs inside. They do drool a little but not to the same level as Mastiffs and Bulldogs.

Some male Boxers can be dominant towards other dogs but with good socialization a Boxer is generally well behaved.

The Bulldog and the Bull Terrier are generally accepted as founding breeds.

As suggested by their working background these dogs are highly trainable and biddable although their prolonged puppyhood means that they do need consistent, firm training and socialization. Also be aware that these dogs can be sensitive so an approach based around positive reinforcement is essential.

These former catcher-dogs can pull on the leash, so training to heel should be foregrounded.

Although naturally strong and confident some of the breed can grow up nervous without comprehensive socialization. Ensure this includes exposing them to a range of sounds experiences in order to ensure a rounded and a happy dog

As with any physically powerful dog consistent obedience training is crucial to produce a good canine citizen and to mitigate any display of dominance towards other dogs which can occur particularly with males.

This dog is real live wire and is almost always on the go. As a consequence a high level of exercise is advised with a long walk of around 2 hours a day. Also this dog will tirelessly play and chase around a safe, enclosed space.

As an intelligent breed, the Boxer will revel in any interactive games and chasing around after toys. Other engaging activities could include scatter-feeding and ‘treasure-hunt’ games in which this dog will excel.

This dog has muscular, square proportions with a slightly arched neck that undulates towards a straight back. The tail is held high curving upwards. The skull arches upwards on the broad head to give sharp definition to the stop above the short muzzle. This domed head in young dogs tends to become more square in mature dogs. The forehead is endearingly wrinkled with warm, brown almond eyes.

The body is lean and powerful with a broad, deep chest. The lithely powerful legs with muscular hindquarters means that the Boxer is capable of a blistering 35 mph.

Interestingly the top line and the holding of the tail approximates to that of the Bulldog further signalling heritage from this founding breed.

The Boxer is an very lean muscular dog who is full of energy, tenacity and playfulness. The male Boxer stands at around 23-25 inches (57-63cm) while the slightly shorter female has a height of around 21-23 inches (55-59cm).

The grooming requirements of the Boxer are vey minimal, and the short coat only requires occasional brushing. But it is important to clean their faces after eating under the eyes and around the mouth as they have a bit of a jowl. Any wrinkles around the nose should also be cleansed to avoid the build-up of bacteria.

This is a very healthy breed and can stay very active even in to its latter years up to around 11.

Some of the conditions that can manifest themselves with this breed include heart conditions such as subaortic stenosis and arrhythmia. Some are also prey to spondylosis (fusion of the spine) and hip dysplasia.