Why get a Bulldog?

The British Bulldog is not the national dog of England for nothing. It is tenacious, loving and fun. Fortunately it now only fights to snuggle next to its owners on the sofa. Its violent past is now long-forgotten and we are left with a relaxed dog with a lovely sense of humor.

This dog can be a little stubborn but with a little coaxing (often in the form of food or treats) can be trained to a good standard. They also make for a good watch-dog.

These dogs do slobber. But each bejeweled slobber is laced with love. These affectionate dogs will make a great addition to any household. 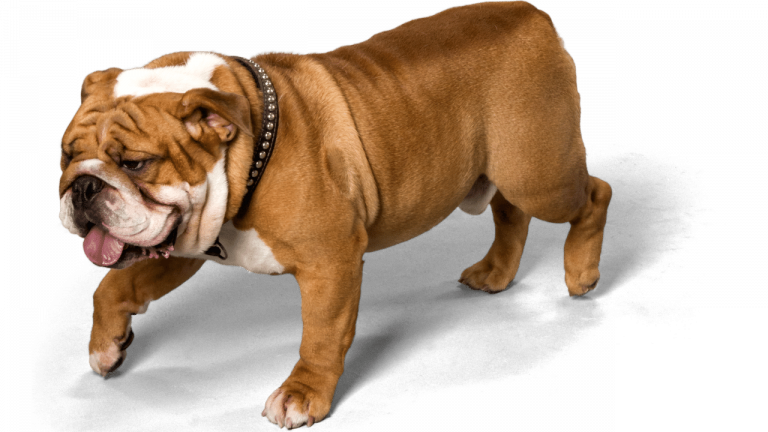 We can be very grateful that this ancient breed is no longer ‘sporting’.  The Bulldog has been associated with bull-baiting since at least the thirteenth century when it gained its reputation for tenacity and fearlessness in the face of any threat. Thankfully this disgusting ‘sport’ was abolished in 1835. But deprived of its core purpose, the breed nearly went extinct following this ban.

But we can thank a group of enthusiasts for preserving this wonderful and iconic dog.  They formed what became known as the Bulldog Club and employed continued selective breeding aimed to keep the breed’s endearing characteristics.  At the same time, they suppressed aggressive tendencies. The result today is a much-loved breed recognized by the English Kennel Club in 1873.  The American Kennel Club quickly followed in 1886.

The English Bulldog was soon adopted as the national breed of Britain.  It is celebrated for its qualities of determination, tenacity, and toughness.  In the fighting arena, this small and powerful dog was indomitable and it refused to be intimidated by any bigger adversary.  Hence the war-time British Prime Minister, Winston Churchill, was named  ‘The British Bulldog’ characterizing his strong leadership during the second world war. Although his jowly looks certainly contributed to this nickname! This historic figure has since reciprocated and a number of Bulldogs are still to this day named ‘Winston’ or ‘Churchill’ in honor of the great man.

Yes, these dogs drool a lot but remember that each slobber is dripping with puppy love.

The Bulldog is a loving and loyal companion and unsurprisingly has a loyal fan base. The modern Bulldog has completely shrugged off its pugilistic past and is very relaxed and easy-going.

Indeed Bulldog owners report that they combine their gentle temperament with a fantastic sense of humor. They are very tolerant of children of all ages although clearly all play and interaction should be carefully supervised.

Additionally, these dogs do not need huge amounts of space.  Nor do they demand great amounts of energetic exercise.  This makes them an ideal dog for city or apartment living.

It is important as an owner to continually balance food and exercise.  If the weather is particularly hot it might be wise to exercise your dog less.  But then this must also be reflected in a reduced intake of food.

Bulldog enthusiasts recommend a raw food and grain-free diet.  This will keep them in good health and avoid the risk of them piling on the pounds.

These dogs are fun-loving and are great family dogs.  This means a large part of its fitness regime can be based around frequent healthy interactive play.   This will keep your Bulldog entertained as well as fit.

These dogs are naturally very friendly towards humans.  But they can be trained to guard the home and bark an alert.

This ancient breed thus offers tough, respectable and dependable stock.  This is reflected in the number of breeds for which it is a founding dog.  These include the sub-grouping of dogs known as Pit Bulls. This covers the Staffordshire Bull Terrier the American Staffordshire Terrier and the American Pit Bull Terrier.

The Bulldog is also a vital ingredient in the highly popular French Bulldog. It is also a founding for popular mixed breeds including the Bull-Mastiff and the Bull Terrier.

Other variations that have been developed in the USA include the American Bulldog and the Old English Bulldogge, the latter being an attempt to restore the larger and muscular physicality of the original English Bulldog without the aggression.

Training Bulldogs to a good standard is not usually an issue.  But they are known for bouts of stubbornness.  What else could you expect from the archetype of the British Bulldog spirit?  Consistency is and positive enforcement are both key strategies for any particularly bolshie Bulldog.

These dogs do suffer acutely from separation anxiety.  Training to help with this needs to be a priority.  This can lead to a range of problems such as attempting to escape and urinating in the home.

Additionally, these dogs are very eager to please and this will help with good outcomes in most areas of training. A healthy treat will be a vital tool in your armory here as most of this breed are food-oriented.

The Bulldog needs a moderate amount of exercise. Ideally, two walks of around 20 to 30 minutes at a reasonably sprightly pace will be enough. Although any walks should be significantly reduced or foregone entirely during spells of hot weather.

These dogs are  ruggedly handsome with their trademark wrinkles to the face and neck and powerful jaws with large jowly flews (lips). Their waddling gait is very distinctive and they have broad, robust heads.  The body is compact and powerful with a short coat and a small, curling ‘corkscrew’ tail.

It is good practice to keep a Bulldog’s folds on his face clean as part of any grooming routine [1].  Various ointments are available to help with this. Also clean the area around the eyes.  This will help protect your dog from infections and other skin irritations.

The Bulldog has a  short coat which can maintained by brushing every two or three day.  But do this more regularly doing hot weather to keep them cool.

But it is very important to keep these dogs fit.  They do need a moderate amount of exercise, particularly as they are notoriously keen on their food. So care must be taken to ensure that they do not put on weight.  A heavy dog will put extra pressure on ligaments and joints.  This can lead to protracted and painful health complications.

Also an obvious consideration for a conscientious owner is that this breed is brachycephalic.  This means that they have very short snouts and squashed features.  This carries with it some health considerations and lifestyle decisions in order to keep your beloved Bulldog safe and comfortable.

The Bulldog is prone generally to labored breathing.  Owners should be vigilant in ensuring that their dog is not struggling for breath.

Breathing difficulties are exacerbated by hot weather.  The short snouts do not allow for enough panting for cooling.  It is strongly advised that you keep your dog cool.  This will include planning walks that are not too long with periods of shade.  Whenever possible, plan outings for cooler times of the day.

If you are considering allowing your Bulldog to cool in water, these dogs enjoy a paddle but struggle to swim owing again to their short snouts.  The fact that they have to tilt their heads back to breathe complicates a dog’s natural swimming motion.  The Bulldog should not swim unless aided by a lifejacket.

Sadly these dogs can also suffer from hip and elbow dysplasia as well as arthritis as they age. Again this can be mitigated by ensuring your Bulldog remains at a healthy weight.