Why get a Bullmastiff?

The Bullmastiff does put the close into the close protection. This adoring dog will want to be with you everywhere!

The Bullmastiff is a wonderful family dog with a gentle and kind temperament.

They are also easy going company and only bark infrequently. But still make a fantastic guardian of the home and family. 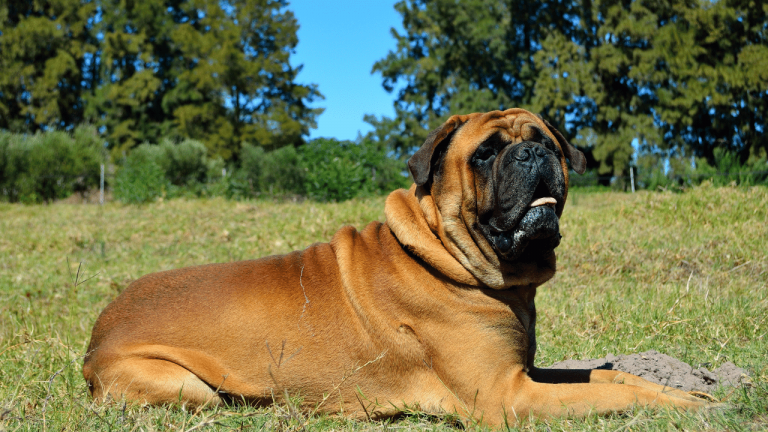 This dog was developed in England, during the latter years of the nineteenth century, through the crossing of the English Mastiff with the English Bulldog in order to produce the perfect guard dog.

These early Bullmastiffs accompanied gamekeepers as the patrolled the lands of the gentry to catch and deter any poachers. This was not just some kind of cat-and-mouse game played out in the English countryside. The legal penalties surrounding poaching were severe, and you could be put to death if you were caught. Hence the expression ‘might as well be hung for a sheep as a lamb’.

This means poachers would attempt to kill gamekeepers if caught. Some would also be accompanied by their own dogs which they could set upon the gamekeepers in order to effect escape. This is why the Bullmastiff became the dog of choice for fending off poachers (and their dogs) and became popularly known as the ‘game-keepers night-dog’.

The combination of early hunting and fighting breeds gave the Bullmastiff all of the single-minded determination of the English Mastiff on the hunt, with the tenacity and fearlessness of the pugnacious Bulldog. Dog experts have concluded that the Bullmastiff is around 60% Mastiff, and 40% Bulldog, ensuring a good sized dog that could knock and pin down an intruder.

While the Mastiff had excelled at tracking and holding large prey, this dog was not quick enough to track down poachers. At the same time the Bulldog was too naturally aggressive to just hold or detain their captive and did not have the size to comfortably bring down a person.

This meant the English Bullmastiff offered the perfect blend of speed and restraint in the pursuit of poachers. They also inherited the Mastiff tendency to grip rather than savage their prey, which was perfect for capturing a poacher and placing them into the not-so-merciful hands of the law.

But with the demise of the poaching laws, this breed lost its main purpose and the numbers of Bullmastiffs heavily dropped. But it was their role as a protective and gentle family dog which ensured this wonderful breed’s survival.

A group of enthusiasts, who recognized their continuing potential as guard dogs, founded the Bullmastiff Club in the 1920s and the breed was standardized and officially recognized by the English Kennel Club in 1924.

This impressive breed began to attract attention over the pond in the USA and the AKC soon followed in recognizing them as a breed in 1934. It is fitting testament to this beautiful breed of dog that they currently rank at a very respectable 55th in the AKC popularity rankings of 2020 based on registration data [1].

The Bullmastiff share many traits with the English Mastiff, most notably the gentle and unflappable temperaments for which Mastiff breeds are so celebrated. This is a calm and loving dog that is also incredibly empathetic. They will always be above all concerned with the welfare and happiness of their owners.

The Bullmastiff is not a dog designed to stay outside all day and night as a guard dog. Rather they have been bred, like the English Mastiff and Neapolitan Mastiff, to closely guard their humans and as a consequence will want to be with you as much as they can.

The Bullmastiff will also want to be as very near to you as possible all times. This breed is very tactile and will not only shadow their owners around the house, but also try to position themselves as close to you. This means that given the chance they will happily become one of the biggest lap-dogs on the planet. The Bullmastiff most definitely puts the close into close protection.

The Bullmastiff is very easy company and are always good fun. These dogs are also tolerant and excellent with children, although as with all dogs this must be monitored by an adult. This live for attention from their human pack and are never happier than when at the center of anything happening in the household

If you are looking for the perfect TV buddy, the Bullmastiff has another huge advantage. They are very quiet and are only infrequent barkers. In total contrast to more vociferous dogs like the Siberian Husky or the Beagle, this canine companion will not spoil the latest movie or series with constant conversation. Rather you can depend upon the Bullmastiff to be the strong and silent type (except when asleep as there might be some snoring with this dog).

But these dogs are very alert and prove excellent as protectors and guardians of the home. A Bullmastiff is continually on guard, the only time they will leave your side will be to check all is in order around your home.

Be aware, however, that this means that, like the English Mastiff, they are very sensitive to any change. Even the hanging of a new picture, for example, can cause the Bullmastiff to feel concern or anxiety. This reflects their original function of tracking poachers where they would look out for any clues of disturbance as they patrolled, such as a broken fence or disturbed foliage, and then investigate. These means that these dogs have become the ultimate creatures of routine!

Although very effective as a guard dog, the Bullmastiff is in no way aggressive. When called upon, in keeping with their function in history of restraining rather than mauling intruders, they will simply grip and the pin a person down.

There are various accounts of the Bullmastiff even adopting a deceptively friendly approach to burglars who have happily ransacked a house, only to find that this ‘goofy’ large dog then holds them down to prevent any form of quick get-away.

This means they are a breed who can happily co-habit not only with other dogs, but also smaller animals such as cats if introduced to them when they are young. This should be based around structured training and socialization.

Another advantage of the Bullmastiff is that they are relatively sedate around the house. They will happily shadow their humans around the house rather than frantically tearing around. But the house-proud shoud still remember to have some slobber rags or towels close to hand at all times!

These dogs were bred to work at close-quarters with humans, and as pets love to be near their human owners at all times, and will form very close bonds with all of its family members. So prepare yourself for a slobbery and excited welcome when you return home for work!

The Bullmastiff does not do well when left alone, so it is very important to prepare them for being alone through socialization and training. This breed will do best in households where there is usually some company.

This breed do spend a lot of their time indoors, but they absolutely need an outdoors space to call their own as they love to roam around and protect their territory. This will offer them both mental and physical stimulation as they check around to ensure all is in order. This means that the Bullmastiff is not a breed generally suited to apartment-living.

The Bullmastiff, along with its parent breed the English Mastiff, has unfairly gained the reputation for not being intelligent or being ‘stubborn’. This is not the case, and the Bullmastiff can be trained to a good standard.

Dogs are never actually ‘stubborn’ in human terms rather some find it harder to understand ‘the point’ of what is being asked of them. The Bullmastiff was bred to be single-minded and determined in the pursuit of intruders, and this can sometimes mean they take a little more time and patience to learn commands.

But a training approach based around positive reinforcement will always pay dividends with this gentle breed. The Bullmastiff is always very eager to please and keep their owners happy. This means that they will usually be obedient to their owners.

The Bullmastiff is usually friendly towards other dogs on walks and in the park. But it is important that they attend puppy socialization classes in order that they learn to be respectful to other dogs particularly as they gain size and bulk.

These dogs are naturally very friendly towards humans, but will also need to be carefully socialized in order to be good canine citizens and not jump up at people.

One training priority is ensuring that these dogs do not pull on the lead. This Bullmastiff is another breed which was expected to be independent and show initiative in chasing down any intruders. This means they can pull on the lead, but once again this can be managed through effective training.

On walks this dog will enjoy tugging games, some ball retrieval and exploring off-leash. In addition the Bullmastiff, in keeping with its heritage, will enjoy roaming the perimeter of a secure, outside area. This guarding activity will provide the Mastiff with extra mental and physical stimulation as they check around to ensure that everything is in order.

The Bullmastiff is a powerful breed with dense musculature around the neck and body. The head is large and broad, with ears set high and wide apart, marking this dog out as a true inheritor of the square and solid Mastiff physique. The back is also straight leading to a tapering tail which is set high, but does not curl over the back.

But this dog has inherited the shorter snout from the Bulldog, and like this smaller dog is brachycephalic. This snout along with the face tends to form a dark muzzle.

The most common colors for the neat short coat are fawn, apricot and brindle.

The face of the Bullmastiff is expressive with a kind expression, which can immediately switch to alertness as the occasion requires. This dog has distinctively pendulous flews (or upper lips) which is the shape of mouth that leads to drooling.

This dog has a short clean coat with only minimal grooming requirements. This means that you will only need to brush your Bullmastiff around once a week to remove dead hair.

This dog does drool so ensure that towels or rags are available to remove this beautiful bejewelled saliva before it is shaken either you or the furniture.

The lifespan of this breed is usually between around 8-10 years.

This dog is victim to some of the conditions sadly associated with larger breeds of dogs.

These include Coronary Heart Disease, hip and elbow dysplasia, gastric torsion (bloating) bone and other cancers. Some also are prey to allergies and skin conditions as well as eye conditions such as entropion.