Why get a Dachshund?

The Dachshund or 'badger-hound' is a hardy and powerful little dog originally developed to dig out badgers and other quarry. But they are now found far more often burrowing into their owner's laps.

These little dogs come in standard and miniature. But each option comes fully bundled with affection and loyalty.

Occasionally they will require a little more patience in training as like some other Hounds, they have a stubborn or 'independent' streak. But the final result will be an impressively obedient dog able to learn a range of commands.

This athletic dog will needs lots of walking and exercise. Also expect this dog to decide to enjoy digging up your garden.

These dogs will also feel perfectly at home in an apartment as long as they are offered lots of exercise. 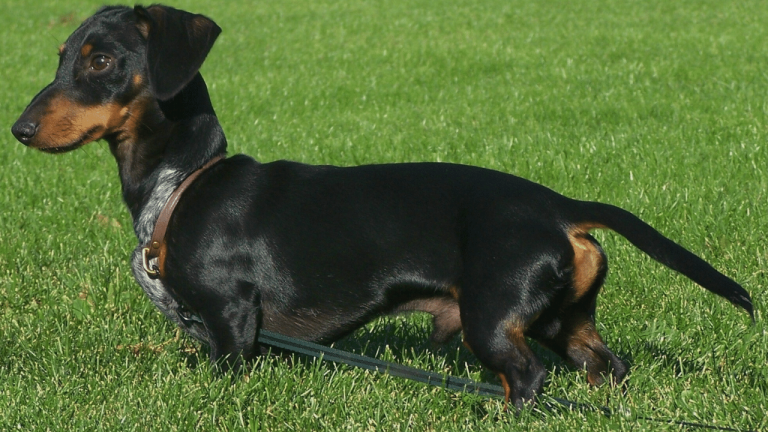 The Dachshund is the smallest dog in the Hound Group of breeds.

Every time you enjoy a ‘hot dog’ you should think about the Dachshund.   The Dachshund’s elongated shape led to the coining of the term by German immigrants to the states [1].

Although ‘hot-dogs’ are relatively modern, the ‘sausage’ style of dog goes back a long way.  This was revealed during excavations at  Egyptian and Romano-Germanic sites.  There they discovered the skeletal remains of dogs with long bodies and short legs.

The Dachshund was traditionally used for badger-hunting. ‘Dachs’ translates as badger in German and ‘hund’ means dog.  These popular little dogs have the long noses and acuity of smell of a scent-hound above ground.  At the same time they show the dogged persistence of a Terrier underground.  It is a formidable combination and has produced a little dog hardy enough to take on a badger.

The Dachshund has long, tough bodies and powerful legs.  This is the perfect physiology to power through tunnels and cavities.  The strength in their legs also equips them to be consummate diggers. These dogs were also speedy enough to chase wild boar.

More diminuitive versions emerged during the nineteenth century.  Their role was to chase smaller prey such as rabbits.  The smaller Dachshund has now developed into a recognized miniature breed.

This breed quickly became established in the late nineteenth century.   Codification of the breed standard took place in 1879 .  The foundation of a dedicated club in Germany followed in 1888.

The Dachshund also immediately became hot property in the states.  It was first registered as a breed by the American Kennel Club in the same year.

This was another German breed which fell out of favor following the Great Wars.  But in 1972 Munich Olympics a Dachshund named Waldi became the first ever Olympic mascot [2].  This led to a spike in its  popularity during the 1970s.

This iconic dog is now ranked as  the 10th  most popular breed in America. Congratulations to this little sausage dog for making it in to the top 10 for the first time in 2020 (based on AKC registration data).

These dogs come in miniature and standard sizes. But whatever size you choose you will be lavished with a huge amount of affection. These dogs are very gentle and loving and they see themselves as much lapdog as hound.  They are as happy burrowing into their owners laps as digging holes in the garden.  The virtues of prey-driven Scent Hounds in the hunt can become curses in training.   The complete focus on scents can lead to distractions. As a consequence this tenacious breed can have lapses with recall.  Also owners report occasional stubbornness.

Alongside an appropriate training regime,  monitoring  meal sizes is essential.   These dogs can be prone to become overweight leading to various health complications.

Dachshunds are very alert and bark a very vocal alarm when people unknown to them approach a home making them very good little watch-dogs.

These dogs are suitable for apartments.   But repeatedly going up and down stairs can strain their spines. If you do have a garden be sure to defend any prize roses.  Many treasured plants have fallen victim to this notorious digger.

This dog is trainable to a high standard using positive reinforcement.  Dachshunds are intelligent and can respond to a range of commands.   Impressive appearances on shows such as ‘Britain’s Got Talent’ have provided a showcase for the impressive heights of training that this wonderful little breed can attain [3] .

Both the miniature and standard sizes of Dachshund need a good measure of exercise and stimulation through interactive play. They enjoy long walks and need at least 2 hours of walking each day. They are relatively fast dogs for their size .

The iconic sausage-shaped Dachshund is characterized with very small legs and a long, sleek body. The back is straight from which the tail tapers off.

The gentle face is set with almond-shaped eyes and a long, arched muzzle with only a shallow stoop undulating up to a small, domed head.

In keeping with a Scent Hound the Dachshund has long pendant ears, which are lightly feathered and slightly rounded.

The Dachshund comes in a range of coat types: smooth-haired, long-haired and wire-haired. The long-haired variety will need daily brushing to avoid tangling and matting. The other Dachshunds are lower maintenance and only need one good brush per week.

This more diminutive Hound has a good lifespan of between 12 and 16 years.  The Dachshund can be vulnerable to spinal issues.  Intervertebral disk disease affects 1 in 4 Dachshunds.  The general advice is that they should avoid climbing up and downstairs as this can put extra strain on the spine.