Why get a Dalmatian?

The Dalmatian is both a spotty and a sporty member ironically of the Non Sporting Group of breeds.

Before the advent of motorization and cars this handsome dog could keep pace with a carriage for around 30 miles. This kind of sustained energy makes it highly suited for an owner or family who love to jog or hike.

The Dalmatian makes a great family pet who generally gets on very well with other household pets. But be aware that some can be aggressive towards unfamiliar dogs. Also they do have a stubborn streak. This means there are better choices for first-time owners.

But the end result is unfailingly a loving, warm-natured dog who will dote on his family and bring more than one spot of joy to any household. 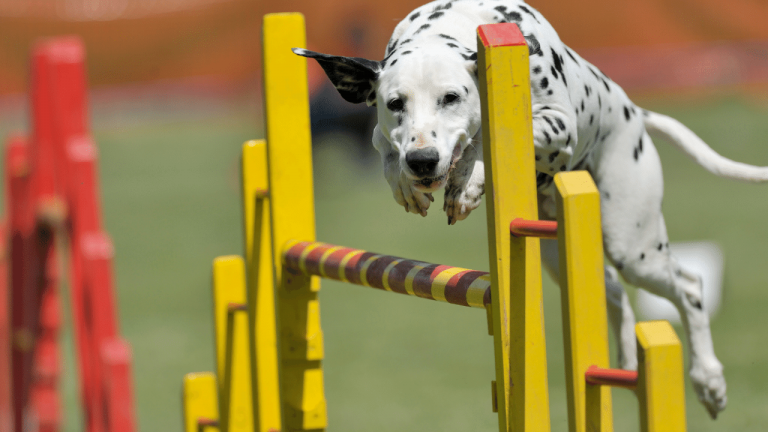 The delightfully dappled Dalmatian is named after Dalmatia in Croatia.  It was here that they found the first pictorial records  of this distinctive breed.  This elegant, spotted dog first appears in a church painting dated around 1600.  It is called ‘Madonna with Jesus and the Angels”.  A little less conclusively a spotted dog features even earlier in a fresco in Italy which dates to around 1360.   Spotted dogs also appear in Egyptian tombs so the Dalmatian may trace its origins back a very long way [1].

This breed were originally guard dogs and companions.  Although they may also have had a role in hunting both game and vermin.  The Dalmatian arrived in England in the 18th century and was initially employed in protecting the mail coach against bandits.  Its criminal antagonists would have included the infamous highwaymen.

But their elegant, regal coats soon made them the natural choice as ‘coach dogs’.  These dogs had the calm and balanced temperaments necessary to work with horses.  They also had tremendous athleticism and endurance which could see them run up to around 30 miles in a day.  In essence, they were also seen as a status symbol.  So quite early on in their careers, this dapper dog became fashionable as well as functional.

Later in the 19th century, these dogs became famed in the United States as fire dogs.  Dalmatians would bark an alert for bystanders to clear the way as they ran beside the carts.  As fighters tended the blaze, they would stand by and guard the carriages and the horses.  Even to this day, Dalmatians are still treasured as mascots and companions to the nation’s firemen [2].

Coaches gave way to motorized vehicles.  The function of these dogs then became redundant.  But the American Kennel Club recognized this breed in 1888.  Now, these dogs are prized as vivacious and energetic pets.

There have been surges in the popularity of the breed.   This happened following the original film ‘The 101 Dalmatians’ in 1961 and the remake in 1996.  Indeed any sudden demand for a breed has been coined  ‘The Dalmatian Syndrome’.  Conscientious breeders and dog welfare organizations have raised concerns.  Such spikes in demand encourage opportunistic and irresponsible breed practices.

Also, people surrender a high number of Dalmatians soon afterward.  Clearly impulsive owners have not prepared themselves for responsible dog ownership.  Nor have they researched the most suitable breed for their circumstances.  This led to alarms bells being rung by dog welfare organizations in the UK and the United States following the release of the 2021 film ‘Cruellla’ [3].

Needless to say, there is rarely a dull moment with this tirelessly energetic and playful dog.  The Dalmatian is a medium-sized breed that need lots of exercise and space.   They manage to combine this lively vigor with sublime elegance.   Their impressive dexterity is reflected in their excellence in agility competitions.

Owners report that their behavior is not always ‘spotless’.  They can be aggressive towards other dogs. This is partly due to their being protective of their human companions.  This means that early socialization is an absolute priority.  Combine this with plenty of interactive play and mental stimulation.

Dalmatians are very intelligent and make wonderful companions.  They are very versatile and are excellent family dogs.  But these dogs demand absolute respect.  They can be grumpy if pulled around by smaller children.

This breed is usually good with other household pets. They are also reasonable watch-dogs and will usually bark an alarm if a stranger approaches the house.

The Dalmatian loves being at the heart of the family and this breed has a  warm and sociable nature. Thus they can struggle with separation anxiety thus early training to prevent or soften this is essential.  These dogs thrive on mental stimulation so interactive toys treat dispensers and Kongs provide an excellent distraction for a lonely Dalmatian.

The Dalmatian can be trained to a good standard although the breed does have the reputation for occasional stubbornness and distraction.

Some dogs of this breed can show aggression towards unfamiliar dogs. This should be prevented by early socialization.

The Dalmatian is a very energetic dog who can, in keeping with a ‘carriage-dog’, run for around 30 miles. This means that it will need at least around 2 hours walking each day. Every opportunity should be taken to allow this breed off the leash where possible in order to allow the Dalmatian to burn off as much energy as possible.

If you enjoy jogging, extended walks, and hiking then this dog will provide a tireless companion. Dalmatians are inquisitive dogs and enjoy games like ‘treasure-hunts’ and interactive play with its owners.

The build of the Dalmatian exudes athleticism. The body is lean and streamlined while a gentle stop curves towards a flat head crowned with high-set drop ears. The tapering tail is carried in a slightly elevated position above long, tautly muscled hind legs.

The Dalmatians have one of the most dashing and dapper coats of all canines decorating their well-proportioned long bodies.  Spots are black or brown ( the latter is sometimes called liver).  The nose and paw pads will be the same color as the spots.

The Dalmatian’s spotted coat is easy to maintain.  It usually only requires brushing a few times a week.  They usually shed twice a year.

The Dalmatian is a healthy breed and has a lifespan of around 11-14 years.

As these dogs have white fur they are more susceptible to sunburn and skin tumors. It is very important to protect this dog during bouts of hot, sunny weather.

Other health complications include bladder stones/crystals.  Special diets are available to help prevent this so it is worth doing some early research.  This breed can also suffer from congenital deafness. Puppies should be tested before adoption.