Doberman Pinscher (aka Dobie) (aka Dobermann in UK)

Why get a Doberman?

The Doberman is a very exciting breed who combines physical prowess, intelligence and agility.

A product of breeding alchemical brilliance this dog reputedly boasts the German Shepherd, Greyhound and Rottweiler amongst its founding breeds.

Often portrayed as a canine bad guy in films and on TV nothing could be further from the truth. For an experienced owner a Doberman makes a wonderfully loyal pet who is always eager to please. 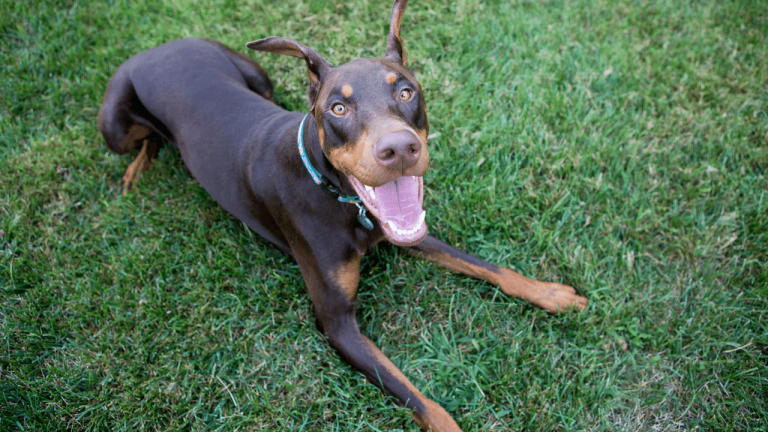 This breed is named after a German tax official called Louis Dobermann.  He developed this breed in the 1880s and 1890s in Apolda, Germany.  Fearing theft, and perhaps unpopularity, the intention was that this dog would protect him on his tax-rounds.  Dobermann clearly had a fascination and skill with dogs as he was also the town’s dog-catcher. One can only imagine that Louis Dobermann, accompanied by this fearless and loyal protector, proved very successful at both his jobs.

Taxation might not sound like the most exciting origin story for a breed. But the Doberman is a prime example of how already specialized breeds can be combined so dynamically to create something new and wonderful. Although not officially documented, the Doberman is thought to be bred from a combination of The German Shepherd, The Rottweiler, The Greyhound and the Weimaraner. Other possibilities cited by the AKC include the Black and Tan Terrier and the German Pinscher.

‘Pinscher’ came to German from the French word ‘pincer’ .  This means  to bite and nip signaling the role of this dog as an intimidating guardian.  The fame and popularity of this wonderful dog soon spread.  In 1900 this dog was designated a breed by the German Kennel Club. In 1921 the Doberman had become global and the  Pinscher Club of America was established.

The recent AKC 2020 registration records the Doberman as the 18th most popular breed in the United States. This popularity is certainly helped by the fact that this lovely dog is no longer associated with collecting tax.

It is worth noting that two different strains of Doberman are recognized.  The original  European Doberman refers to the traditional working-line of dogs.  They are slightly heavier with more muscle mass.  While the American Doberman is a show-line and tends to have a lighter frame, a thinner and more sharply curved neck.

Like the German Shepherd  and Rottweiler, the Doberman served with distinction during the Great Wars.  One example of this was a Doberman named Kurt.  He was memorialized with a bronze statue in the 1990s for his efforts in the Battle of Guam in the South Pacific in 1944.  The statue also recognized at least 25 dogs for their heroics as watch-dogs and messenger-dogs who were also lost in action [1].

This dog is dynamic ,majestic, intelligent and very quick in both body and mind.

This makes the breed hyper-trainable.  The Doberman is very eager to please and will quickly pick up a range of commands.  The recall is excellent in a well-trained dog from this breed.  So they can be fully trusted to demonstrate their blistering speed in open spaces off the leash.  Their high intelligence does mean they need plenty of  mental stimulation.  These dogs came in at an impressive 5th place in Stanley Coren’s evaluation of the intelligence of dog breeds [2]. Dobermans need firm training but positive reinforcement is key as they can be sensitive.

This dog is incredibly versatile and successful in a range of spheres.   This is no surprise considering the range of excellent ingredients offered by its founding breeds.  It serves with honor in the police, protection and security as well as search and rescue operations.  The Doberman is utilized by various services across the world.  But interestingly this breed is not as favored  by services in countries with colder climates as it only has a single coat.  In the United Kingdom, for example, the German Shepherd is a far more common service dog.

The Doberman is recommended for strong, confident and ideally experienced owners. So arguably it is not the best choice of breed for a first-time dog owner.  The Dobie is generally better suited to an active household.  It is an active and energetic breed that needs ideally between 2 to 3 hours walking.  They are great dogs to accompany you on adventure or hiking holidays.

These dogs are also very sociable.  They get on with other dogs, although they can assert dominant behaviors.  This can be mitigated by early socialization training.  They are very athletic and do perform well in canine agility contests.

But they are excellent guard dogs.  Doberman’s  are very protective of families, particularly children.  In this respect, like the Staffordshire Bull Terrier, they could be described as a nanny dog.  A well-socialized Doberman is a superlative pet.  They  can very easily adapt to all aspects of family life.

These dogs are very majestic in appearance.  They enjoy a long, lean build with a back which curves slightly down to well-muscled hindquarters.  The Doberman has a handsome flat-topped head with a long muzzle.   They have razor-sharp teeth that ‘pinch’ in a  scissor-bite with their upper and lower jaws neatly interlocking.

But this physical prowess comes at a cost in popular culture.  Along with the Rottweiler, the Doberman often plays a convincing cameo part in television and film as a menacing canine antagonist.  Even the 1972 film ‘The Doberman Gang’ had them portray a gang of canine bank robbers [3].  I am not sure how happy Louis Dobermann would be considering this dog’s founding purpose was to guard money! Unfair typecasting is what we say on this website.

Apartment living is not completely out of the question but inadvisable.  In these circumstances this active breed must be given lots of opportunities to exercise.   Ideally they should have lots of space and an outside area in which to burn off any excess energy.

The Doberman is incredibly intelligent and can learn a full range of commands. An absolute priority, however, is to ensure that this dog is well socialized in order that its strong guarding instincts do not translate into any form of aggression with unfamiliar dogs.

This dog is very keen to please. But inexperienced dog owners are highly recommended to attend training classes to ensure that this clever canine is fully obedient and to prevent any domineering behaviors. Moreover, it is also important that a Dobie gains all the mental stimulus that it needs.

This large, athletic dog is beautifully streamlined. The head is long and flat-topped with almond-shaped eyes. While this elegantly proportioned dog has a back that gently curves towards a straight tail, and a tucked in stomach. The legs are long and powerful with cat-like feet which all contribute to this dog’s blistering speed.

The Doberman’s coat is short and they don’t have an undercoat. This means grooming is straightforward and only occasional brushing is required.  But they can suffer in spells of cold weather. So owners in colder climates should invest in a warm dog coat.

These dogs are most commonly black and tan like the Rottweiler.  But they can also have blue, red or fawn coloring.

The Doberman has a life expectancy of 9-13 years.  Possible health complications include:  Cardiomyopathy, hip and elbow dysplasia, bloating and  occasional arthritis.  Some among the breed can develop Von Willebrand Disease (excessive bleeding due to a clotting disorder).