Why get an English Pointer?

If you are looking for a hardy, resilient dog who loves to be outdoors in all weathers, then the English Pointer could be the perfect choice.

These dogs are constantly playful and make for an ideal family dog. Just make sure they are socialized to ensure their play does not become exuberant to the point of knocking children over or annoying other dogs.

But this dogs are real people pleasers. Their eagerness to make you happy means that while they will point, they will rarely disappoint. 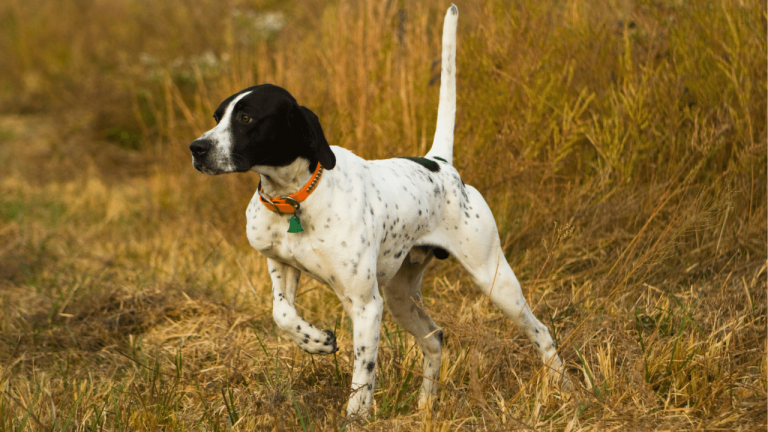 The early history of the English Pointer  is a little shrouded.  But  one theory is that the Pointer was originally from Spain.  It was deemed too slow for English game so crossbreeding took place with similar breeds like the Italian Pointer. It is also possible that Sighthound breeds such as the Greyhound were used to breed in extra speed to this long-legged Pointer.

The final result was undeniably impressive.  It was crucial to have a dog entirely disciplined to stay still until after shots are fired and the English Pointer had the necessary obedience and focus.    This success is reflected in the fact that it was only two breeds at the first British dog show in 1859.

These dogs reign supreme at the earliest stage of the hunt in locating quarry.  They have a very attuned sense of smell.  Pointers and Setters distinguish the scent of quarry in the air amidst a bouquet of scents.  In this they also display the qualities of alertness and focus.

To the uninitiated, ‘Set’ and ‘Point’ might be terms usually associated with tennis.  But in the gun dog world these terms signify a crucial distinction in how gun dogs find quarry.  The names ‘Pointers’ and ‘Setters’ refer to their stance when indicating the location of the game-birds. The former literally ‘point’ with bodies frozen rigidly and with a leg crooked forward. The latter’s body ‘sets’  their whole body into a crouch stooping in the direction of prey identified through scent. This stance is called ‘setting’.

The English Pointer has remained steady in its popularity in the last few years.  According to the recent AKC 2020 registration data, this dog is now  ranked as the 117th most popular breed in America [1].

The English Pointer is an affectionate and loyal breed.   They are a very playful and enjoy lots of mental stimulation. This will develop their excellent cognition or ‘dognition’.  This will help the clever Pointer to learn an even greater range of commands.

This medium-large dog combines speed and stamina.  It is very hardy and agile.  These qualities combined with its athleticism means that it excels at dog agility sports and obedience trials.

These dogs don’t bark very often  but they will bark an alarm when unknown visitors appear.  This makes them good watch-dogs as well as relaxing company.

The Pointer is a gregarious dog and they will fit in with any other dogs in the household.  But, as with all canines, good socialization strategies are essential.  They very rarely show aggression towards other dogs or people.  But smaller pets may be an issue due to the prey-drive of this breed.

These dogs need lots of exercise.  Alongside the exercise it is important to moderate feeding as some of these dogs can be somewhat prone to obesity

Pointers are not ideal for apartment-living.  They are far happier when they have a good outside space in which to run around and investigate scents in the air

These dogs can suit a first-time owner if the training is consistent.  But they are a large self-willed dog.  This means there are easier options particularly for anyone frail.

The English Pointer is a highly trainable and generally obedient dog. But like many dogs designed to scent quarry they can be easily distracted (or the polite term might be explorative) on walks. This means that there will need to be a strong focus on recall.

These dogs do have friendly and gregarious natures and are very rarely aggressive. But they can get very excitable and rambunctious in play. This means socialization needs to be consistent and introduced as early as possible.

With a good training regime in place, the English Pointer makes for a wonderful companion, particularly for the outdoors type.

As with all the Sporting Group of Dogs the Pointer needs a high level of exercise. This should include at least a couple of hours walking every day. Alongside this there should be lots of opportunity for exploration and play in a safe, enclosed area.

Any game involving hunting or scenting out hidden treats or other toothsome items is ideal for this dog. Scatter-feeding is another method to add some extra stimulation into the English Pointer’s day.

The Pointer is a very handsome dog. The muzzle is long and concave, perfectly shaped to funnel in scents from the air. The back gently slopes curving towards a long tapering tail that is held level with the back.  They also have distinctively arched toes.

In keeping with the role of a Pointer, which requires a raised head to sniff the air, these dogs keep their heads high at all times. The build of the English Pointer bespeaks lean, muscular athleticism.

The grooming requirements for this dog are very minimal. They should be brushed occasionally,

The English Pointer has a short coat which is relatively low maintenance and grooming requirements are minimal.  The shedding is only moderate and only needs brushing around 3 times a week although this should be more frequent during periods of very hot weather along with other measures to keep your dog cool.

The colors are commonly  orange and white.  But alternatives include liver and occasionally lemon .  Some iridescent Pointers are even tricolor. They have long ears with a silky texture.  These should be cleaned regularly to avoid any irritation or infection.

The English Pointer is a very resilient and healthy breed of dog. Owners report that these dogs can remain at a high level of activity even into their ‘teens’. They have a lifespan of around 13-16 years.

There are no breed specific issues but like all medium to large dogs they can suffer from hip and elbow dysplasia. There are also occasional eye problems for this breed such as cataracts. Some of the breed are occasionally prey to deafness and occasionally also heart defects or bloating.  Owners should look out for tooth decay and gum disease ensuring dental health is regularly checked.