Why get an English Springer Spaniel?

If you are a first-time dog owner looking for a fun, playful family dog then an English Springer Spaniel could be the ideal choice.

Not only are they very trainable, they have very low demands in terms of grooming.

But this dog will only suit those who have very active lifestyles. They need lots of long walks with opportunities to dart around and explore. They also very much enjoy getting their feet and everything else wet.

With its lovely temperament and heart-melting looks this is one dog set to put the 'spring' into the step of anyone seeking a canine addition to their family. 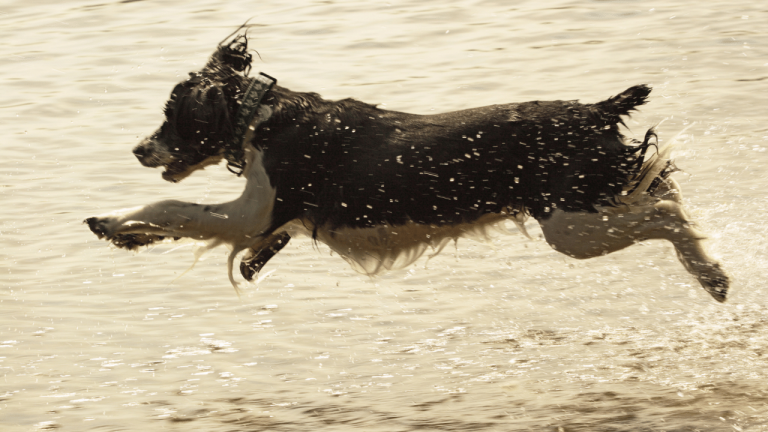 The English Springer Spaniel is one of the older breeds of Spaniel.  It is also often seen as the classic example of this subcategory of breeds in the Sporting Group.

It was originally known as the Norfolk Spaniel and  became recognized as a breed in the early 20th century. They have the longest legs of all the Spaniels and are a speedy breed able to pelt forward at speeds of up to 40mph.

The name comes from this Spaniel’s role in ‘springing’ birds into the air for the hunters to train their guns upon. Although the activities of the Spaniel type of dog pre-date the gun as before this they helped startle birds into nets or into the paths of circling falcons.

But Spaniels really came into its own as game shooting became popular in the early 19th century.   Around this time specialized breeding took place to produce the smaller Cocker Spaniel.  This more diminutive springer gained its name for its role in flushing out and hunting woodcock.  Apart from the size they are almost inseparable from the larger English Springer.  But the Cocker Spaniel tends to have a longer muzzle and its ears are set slightly higher.

It is also worth noting that over the last 60 years two breed variations of the English Springer Spaniel have emerged.    There is a show-line (called bench)  and an original working-line (called field).  The show-line tails are not docked and they have a slightly heavier build.  They also tend to have longer coats with more feathering.  But these variations are not distinguished in the AKC breed specification.

This Spaniel may not be springing up the rankings, but has remained in the top 30 most popular breeds in America.  It is currently ranked as 26th according to  the AKC registration data for 2020 [1].  It also boasts a star-studded array of owners including George W Bush and Oprah Winfrey.

The English Springer Spaniel is a hardy and adaptable medium-sized dog.  Its physiology equips the breed to withstand varying weather conditions and terrains.

As the tallest of the Spaniels their long legs allows them to cover a variety of terrains at speed.  These dogs can readily cope with long grass, rough moorland, rivers and a variety of difficult terrains.  This hardiness combines with a fantastic nose.  This breed are able to pick out airborne scents of pheasants and other quarry from a distance.

This popular breed has made a very successful transition to family pet.  The English Springer Spaniel has a very gentle and sociable nature.  They love to be amidst the center of all family activities and are good with children.  They can get on with smaller animals such as cats but this demands socialization training as there can be some residual prey-drive

These dogs also thrive on mental stimulation and play. Springer Spaniels are very trainable and always eager to please.  This makes them a very good first time dog for owners able to offer lots of exercise.

These dogs love to be outdoors.  The English Springer Spaniel is a great dog to take on an active holiday.  They are perfect companions for a long hike.  But Springers are not recommended for apartment-living and are far more suited to be in a home with a garden.  This will allow the Spaniel to run around, play and explore  to its heart’s content.  Even better if your budget extends to a doggy paddling pool.

Cocker Spaniel offers a smaller version intended to hunt the woodcock. They are the virtually the same as the larger Springer Spaniels in all other respects.

The English Springer Spaniel will always be an eager and able pupil in respect of training. These intelligent dogs are eminently obedient and biddable once they have been trained.

This is a very intelligent and trainable dog.  But it does need an approach based on positive reinforcement as it can be sensitive.  The English Springer Spaniel will also excel at bringing the morning paper to you intact.  In common with retrievers it has ‘a soft mouth’.   Dogs with soft mouth are, as the name implies, able to carry objects gently without causing damage.  This  is a useful residual ability left over from its role as a gun dog.

These very active balls of energy do not like being left alone.  They suffer significant separation anxiety.    This means you will need to train them to mitigate this. Owners should also use toys and distractions to ensure they do not become destructive.

They can be a little over-exuberant in play and like most hunting-based dogs they can sometimes find themselves distracted on walks by interesting scents. So the recall training should be prioritized

The exercise requirements for the vibrant English Springer Spaniel are very high and owners must be prepared for long walks as well as giving their dog plenty of opportunities for interactive play and exploring and running around in a safe, outdoor space.

It is recommended that this breed gets at least 2 hours of exercise each day.  The Springer will show a constantly busy curiosity on their walks.  Characteristically  they dart around investigating every new scent.  This Spaniel will also relish any opportunity for a quick dip in water.

A variety of dog ‘treasure’ hunt and scent games are ideal alongside interactive play with family members. These bounding fluffy balls of energy are brilliant with children and are more capable of tiring them out with hours of play. You could also consider scatter-feeding to add extra mental stimulus into your dog’s day.

This level of exercise will ensure that your Springer Spaniel becomes a relatively calm and relaxed member of the household.

The English Springer Spaniel has distinctively shaped brown eyes which they fully exploit in using them for heart-melting appeals for attention and praise. The head is framed by long pendant ears with a gently curving stop from forehead to nose.

The back of this Springer slopes gently towards a feathered tail which is carried slightly below the level of the back. The English Springer Spaniel has a narrow, lithe frame with powerfully compact rear legs that put the ‘spring’ in its quick and agile step.

These are attractive dogs whose coloring is either black and white or  liver and white.   The English Springer Spaniel a has lovely feathering on its coat and occasional combing will prevent this becoming tangled or matted.  This is heavy on the chest and lighter over the rest of the body.  The grooming requirements are light: this dog requires grooming only two or three times each week.  Additionally they only  shed moderately throughout the year.

The English Springer Spaniel is a healthy breed with a lifespan of around 12-14 years.  They can be prone to ear infections and dental issues such as gum disease and tooth decay.  Some of the breed can also suffer from eye conditions such as cataracts and glaucoma as well as  retinal atrophy.  Occasionally they are also affected by  hip and elbow dysplasia.