Why get a French Bulldog?

Are you looking for a companion who is laid back with a good sense of humor then the French Bulldog might well be perfect.

The French Bulldog is only a dog's whisker away from the Labrador in the popularity stakes, no mean feat when the Lab has been 'top dog' of the AKC rankings for 30 years.

These dogs do enjoy play, but they like rest even better. This amiable dog will just want to cuddle up and sometimes drool all over you. Who could resist?

French Bulldogs are ideal for city dwellers and those who may not have access to outdoor space. Although it is important to keep them fit.

They do have a stubborn and cheeky streak. They are renowned for their humorous antics which have earned this dog the nick-name 'Clown Dog'. But consistent training will iron out the wrinkles in their behavior if not in their adorable faces. 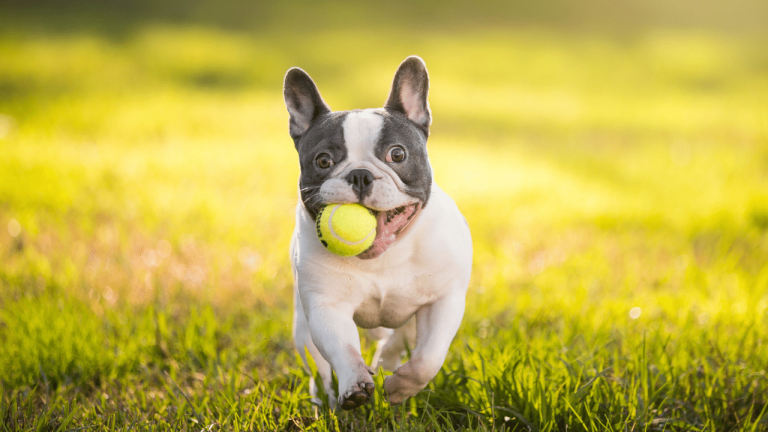 The staggeringly popular French Bulldog is a direct descendant of the English Toy Bulldog, which is now extinct.  This diminutive version of the English Bulldog was taken to France in the 19th century by lace-makers from the Midlands in England who were forced to ply their trade elsewhere by the industrial revolution.  Their tough little dogs intermingled with French Terriers and Pugs.  The result that we see today is arguably the ultimate in the small, cute companion dog.

This early version of the French Bulldog was to make a triumphant return to English shores.  A Mr. Krehl imported them into England in 1894 and they were hailed as a successful attempt to breed small, healthy Bulldogs. This French canine export grew in popularity.  In 1902 enthusiasts founded the French Bulldog Club of England.

Things have gone a little mad for this fun little dog since.  Its conquest of the canine world continues unabated.  The French Bulldog is now officially the second most popular dog breed in the United States, having been ranked as 82nd in 1991 [1].  In the United Kingdom, it is within a cute dog’s whisker of overtaking the Labrador Retriever.  This is even more incredible as the Lab’s reign as the most popular breed has been unbroken for 30 years [2].

For an interesting furrier variation on the delightful theme of the French Bulldog please click here to find out about the Fluffy French Bulldog.

French Bulldogs are notorious for having a real cheeky sense of fun.  Hence they have been given the nickname ‘clown dog’.  It is an intelligent little dog that loves to push boundaries.

Another reason for their popularity is their small size.  Like the Bulldog, this breed is ideal for city dwellers and anyone who does not have a huge amount of space.

French Bulldogs are rarely aggressive although they can be a little feisty and some are prone to yap at unfamiliar dogs. This can be mitigated with consistent socialization training.

French Bulldogs absolutely dote on their human owners. They like nothing better than to cuddle up to their owners and then start emitting gentle snores. These dogs will certainly suit those who prefer a sedentary lifestyle or are unable to undertake vigorous exercise.

But without their human companions, this breed suffers intense separation anxiety.  Training to prevent or moderate this is essential.  They have playful natures and need a distraction when alone.  Treat dispensers or interactive toys can provide useful stimulation.

For the slightly stubborn and every so cheeky French Bulldog, consistent and firm training is necessary from the outset.

The French Bulldog is never going to be the star pupil of the training group. But with positive reinforcement sweetened with the odd healthy treat you cannot fail but to have an adorable and well-behaved dog.

These dogs do not demand a huge amount of exercise.  But they should be as active as possible to maintain health.  They love interactive play and will enjoy games and challenges either in the home or outside.

A couple of half-hour walks a day will guarantee a happy and healthy Frenchie.  These dogs play not very hard but still rest hard afterward.  These dogs know how to achieve a work-life balance.

The French Bulldog is muscular and broad like its English cousin, the Bulldog. It is sturdily set with a thick neck and a low center of gravity. But it differs in its famous ‘bat-ears’ and a more square-shaped head.

Another reason for the popularity of the French Bulldog lies in its very minimal grooming requirements. This dog will only require weekly brushing, although this should be increased to daily in periods of hot weather to help your Frenchie to keep as cool as possible.

Ensure also that you keep the folds on their faces and areas around the eyes regularly cleaned [3].  This will help prevent any bacteria from forming.  Thus the likelihood of skin conditions or irritation is minimized.

This breed, like the Bulldog, is brachycephalic.  Their short snouts can lead to some health complications.  This includes respiratory distress.  This condition can have a big knock-on effect and cause other ailments.  Owners must be vigilant in checking that their Frenchie is always breathing comfortably.  Any exertion or exercise must be moderated to ensure this dog does not struggle for breath.

This also means they are not good in the hot weather.  The short snouts reduce the amount of cooling available through natural panting.  Plan all-around cooler times of the day with as much shade as possible.  A range of methods should be considered to keep your dog cool.