Why get a German Shepherd?

The German Shepherd has been called the 'king of dogs'. Like all dogs in the Herding Group this breed has intelligence, capability and a very high level of obedience. But the GSD also has an incredibly resilient temperament and a capacity for bravery that is very hard to equal.

The German Shepherd is the most common service dog due to the fact that its temperament is so balanced adding a layer of restraint and control not quite met by other dogs used in the services.

This makes it a wonderful pet whose loyalty and devotion to its owners know no bounds.

But prospective owners should be active and prepared to ensure that this energetic breed gets all the exercise it needs. Also the GSD craves the physical and mental stimulation of challenges games as well as training exercises.

Owners must also be prepared to socialize their dogs early in order to prevent any domineering behavior towards other dogs.

With this in place this king of the canines will prove a majestic addition to any household. 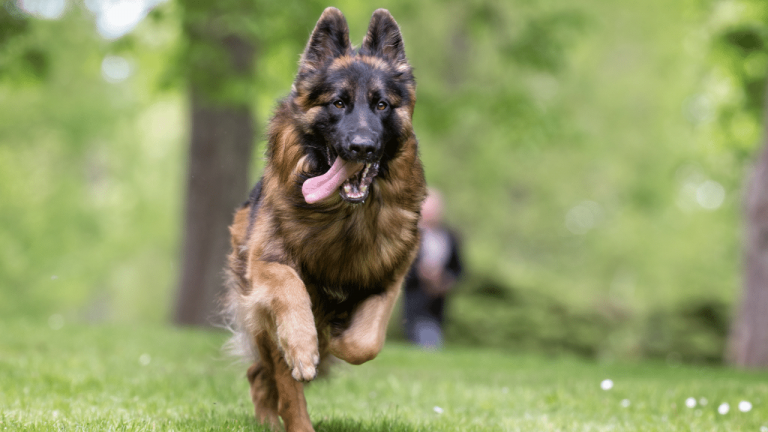 This breed came into being in 1899 in Germany.  Rittmeister Von Stephanitz oversaw the inter-mingling of three different European shepherds’ dogs.  It was an act of alchemical breeding brilliance.  The result was a beautiful and very popular dog.  The German Shepherd is highly intelligent and capable and unbeaten in response to training and adaptation.

It is no surprise then that some proud owners have dubbed the German Shepherd as the king of all dog breeds.  In keeping with this, Stephanitz’s founding dog for the breed had the princely name of Hector.

But naming has been an issue for this dog in the past.  Following the second world war, this dog was temporarily named the Alsatian to avoid association with Germany. This was based on the region of Alsace in North-Eastern France.   But, the German Shepherd was able to officially reclaim its original name in 1977.

This brilliant dog quickly found its responsibilities diversified beyond the pastoral. Alongside the Doberman Pinscher and the Rottweiler, it was used for messaging and guarding during WW2.   It also proved an adept medical dog during WW2.  As a proven tracker it was able to identify and bear medical supplies to the injured on the battlefield. The armies found this dog focused and reliable.  It was never distracted by other animal scents.

Since then this capable dog has been snapped up by services such as the police and armed forces.  The German Shepherd has also excelled at search-and-rescue, as a guide dog for the blind and in drug detection.  For one example of their many heroics of this breed look no further than the actions of Finn, a British police dog. His bravery led to the passing of Finn’s Law in the UK. This put in place higher standards of protection for all service animals [1].

The versatile and impressive German Shepherd has consistently proven a very popular breed even occupying the top spot for a number of years. It remains by far the most popular dog in the Herding Group and ranks at number three according to 2020 AKC registration data [2].

The German Shepherd possesses an excellently balanced temperament.  These dogs make wonderful pets and are brilliant around children.  Some can have excitable temperaments but they are always gentle.  German Shepherds are fun-loving members of the family and very playful in nature.

In addition they are also able to cohabit with smaller pets. But, like all dogs, they will still need to be introduced to cats in a sensitive and structured way.

This breed are natural guard dogs and their protectiveness can make them a little distrustful of strangers.  But their high level of trainability allows them to be very adaptable and biddable.  Also a well-looked after German Shepherd will usually have a steady temperament.

A particular early focus should be on preventing separation anxiety.   This is another breed that really can struggle when left alone so training to mitigate this should be put in place as early as possible.

The German Shepherd is a powerful and confident dog but occasionally some of the breed can be a little aggressive or domineering towards unfamiliar dogs. This means early socialization is absolutely essential. With this in place the German Shepherd will prove to be gregarious and playful with any new canine buddies that he might meet.

These dogs are also famous for their powerful jaws.  Hard-wearing toys and chews offer an ideal and therapeutic distraction for them generally but particularly if they have to be left alone for any period of time.

There has been some criticism of the ‘show-line’ version of German Shepherd.  This is based around an arbitrary ‘ideal’ of a sloping back.  This has led to significant health complications due to uneven weight distribution.  This has resulted in hip dysplasia, elbow dysplasia and  some problems with digestion.

The ‘working line’ has straight backs and stronger hips.  These are dogs are bred as they were originally intended rather than for some ill-thought-out aesthetic purpose.  They are less prone to any of the aforementioned health complications.

The German Shepherd might technically be in the Herding Group but its hyper-trainability means it has bee widely used in areas such as the police service, military and search and rescue. It originally also excelled as a guide dog. It is therefore as versatile and capable as any dog in the Working Group.

The main aspect of training this very intelligent dog is socialization to ensure that it does not become domineering or aggressive. This should be as consistent and as early as possible. Beyond this a German Shepherd is very able to learn a range of commands and will always be at or near the top of the class in any training class.

The German Shepherd requires a very high amount of exercise. These dogs require two hours or more of walking. Alongside this the more interactive play and games offered the happier this intelligent and energetic dog will be.

The GSD will also often excel at obedience and agility trails as reflected in their many impressive exploits in the police and military services across the world.

The German Shepherd bespeaks majestic fluidity. The attractive wolfish face is finely sculpted and set with almond-eyes that bear an intelligent and inquisitive expression. The head is crowned by arched, pointed ears which are carried erect.

This breed’s coat, both long and short, is easy to maintain although they benefit from a daily brush. If you have the long-haired version you may well have to brush a couple of times a day to prevent matting.  They usually shed around twice a year.

The coats are typically a delightful sable or sometimes a smart black-and-tan.

The lifespan of a German Shepherd is between 9-13 years.

As a large dog it comes as no surprise that this breed is susceptible to hip and elbow dysplasia. Another main concern for the GSD is gastric torsion and other gastrointestinal complications.