Why get a Great Dane?

The 'Apollo of Dogs' is a truly amazing and majestic animal. This former 'catching-dog' bred to bring down large prey such as boars, is now truly 'a gentle giant'.

But it is not a dog for an inexperienced owner. Its very size means socialization and a high level of obedience training a must.

But if you have the space and experience this doting dog will make a wonderful pet. The biggest lapdog on the planet will ,make for a constant, doting canine companion. 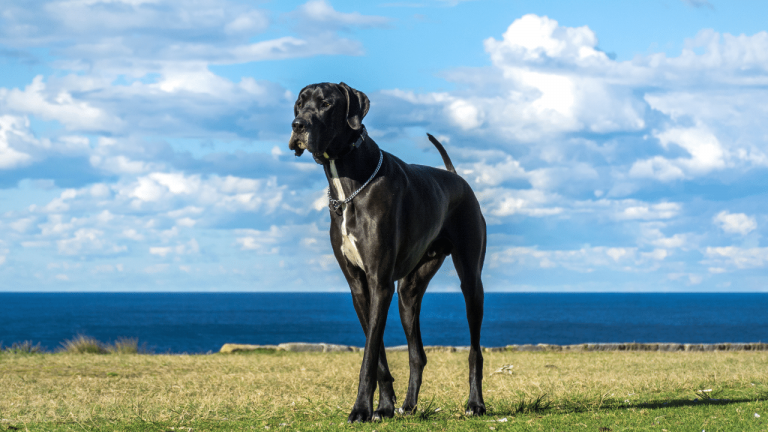 It is perhaps a reflection of the magisterial nature of this dog that national claims to ownership have been something of a big bone of contention in the history of this huge hound. Most sources agree that the Great Dane was, in fact, originally from Germany, although some accounts claim Scandinavian origins even before this. There is even some evidence that this type of large dog was extant in Ancient Greece, and there are some depictions of dogs in Ancient Egyptian tombs from 3000BC which bear a resemblance to the magnificent breed that we have today.

From the 13th and 14th centuries there are clearer pictorial and written records of the forebears of this giant breed. In Germany they were known as ‘The English Dogge’ owing to it being founded largely on the English Mastiff, which is in itself descended from the large and ferocious ‘Molussus’ dog. It is thought that extra size and speed was contributed to interbreeding with the Irish Woflhound, and possibly other Sight-Hounds such as the Greyhound. This added more of a lean, athletic frame while retaining the strength and power that we still associate with the Great Dane.

Although the role of these huge hounds was not to ‘sight’ the prey, but rather they were ‘catcher-dogs’ which ran alongside the horses. Once the prey had been discovered these dogs were sent in to bring down large powerful prey such as boars, deer and even bears.

In 1876 Germany declared the Great Dane as its national dog and pronounced that it should henceforward be known as the ‘German dogg’, but in Holland they continued to call this breed ‘The Dutch Dog’. Finally due to some anathema towards Germany most English-speaking nations settled on Great Dane.

Originally the companion of nobles and kings even to this day the Great Dane retains a sense of being an aristocrat amongst canines popular not only for its formidable strength and speed but also for its regal appearance. Indeed this has further been elevated to divine heights and this dog is often referred as the ‘Apollo of dogs’ reflection its beauty and athleticism.

Although kennel clubs insist that there is complete equivalence between American and European breed standards for dogs bred to high standards, some breeders claim a noticeable difference in appearance. Whereas the European Great Dane has more loose skin and fuller lips, with a square head, the American version of the breed is tighter around the face with a slightly lighter build.

Although the Irish Wolfhound is accepted generally as the tallest breed, the tallest dog ever recorded was a Great Dane called Zeus from Michigan in the United States who measured a staggering 44 inches (around 119 cm) from foot to withers.

Another famous Great Dane is not so well known for being fearless in pursuit of his quarry is, of course, Scooby Doo. Although perhaps his love of food is certainly in keeping with the voracious appetite of these wonderful large dogs.

The Great Dane might be characterized as the biggest lapdog of all the breeds. They often very affectionate and tactile and like to sit or at least, attempt to sit, on their owners laps. In addition they not only cast a huge shadow, but this doting companion could be described as a large shadow in itself. A Great Dane will not want to be apart from you for a moment and they will continuously follow their owners around the house and can tend to be a little attention-seeking. A Great Dane can be characterized as a very devoted and loyal canine companion.

These dogs need almost constant human companionship and suffer terribly from separation anxiety so training to mitigate this is an absolute priority as early as possible. Great Danes are very spirited, energetic and active dogs as well as being incredibly powerful. These dogs are gentle giants but a dog this size requires early socialization to ensure they don’t accidentally injure smaller dogs and are not destructive in the house. But they have a gentle and mellow temperament and a well-exercised Dane will offer a docile and laid-back canine companion.

But with this in place this breed are celebrated as being very patient with children of all ages and good with other pets in the household. The boar-hunting or ‘catching’ days are now long-forgotten as this dog does not have a high prey-drive adding further to their ability to be trained. The trainability is also enhanced by their incessant enthusiasm to please their owners.

As noted below exercise must be carefully managed in the first couple of years of a Great Dane’s life. But when older and fully grown a good dog for anyone enjoying outdoor pursuits as they can walk with their distinctive long stride for miles.

The Great Dane makes for good a guardian of the home with its large resounding bark and deceptively formidable appearance, although they are naturally very friendly towards humans. In fact owners report that they are very talkative dogs and have a good vocal range.

For obvious reasons the Great Dane is not suited to an apartment and are happiest when they have access to an outdoor area for periods of intense play.

Home-owners should be aware that with each Great Dane comes a great amount of slobber. But all this slime comes laced with unfailing love for their owners. But their general size does mean that these dogs are better suited to experienced dog owners.

As mention, training and socialization should happen as early as possible. It is important to have full control of these huge hounds to avoid accidents particularly outside the home. So consistent obedience training should be put in place alongside this.

These dogs are not only eager to please but also intelligent so can be trained to a very good standard. Great Danes do have a reputation for being a little sensitive so owners must always adopt an approach based around positive reinforcement.

In keeping with their hunting heritage, recall can be an issue as they are easily distracted by scents so should be prioritized in the training regime.

Great Danes should not be over-exercised in the first couple of years due to softness in the bones. This means owners should adopt an approach of little and often in these crucial years where bones, joints and ligaments are still developing.

Fully grown adult dogs benefit from around 60-90 minutes of exercise each day including opportunities to stretch their very long, elegant legs.

But generally they need a good level of exercise including a good run in a walk over an hour.

This elegant and majestic animal should has perfectly squared proportions where the legs and the sleek, elegant body are around the same length. Atop the long arched, muscular neck these dogs have a strong, squared head with a distinct stop. The almond eyes have an intelligent expression. The back should be straight with a curving tail that tends to be held low.

The short, thick and glossy coat is low maintenance and sheds only once or twice a year. Only a moderate amount of grooming is required and weekly brushing will suffice to remove dead hairs.

The lifespan of these dogs is 6 to 8 years.

Be aware that these dogs are especially vulnerable to bloat. In order to safeguard a Great Dane against this owners should plan to exercise at least an hour before they feed and at least an hour afterwards.

Another important safety tip is to be careful to remove any slippery surfaces as a fall could be very injurious to a Great Dane, particularly in the first two years of life.

Other potential health problems for this breed include cardiomyopathy and other related hearted condition. They can also be prone to bone cancer, hip dysplasia and Wobblers syndrome. Some dogs do also have issues surrounding vision and hearing.