Why get a Greyhound?

The Greyhound is athletic, sensitive and wonderful family dogs. This fast dog will soon be fast friends with your whole family.

They are a top choice for a first-time owner. Not only do they have gentle, relaxed temperaments, but they are very trainable.

Other bonuses include a tendency not to bark unless necessary and a very low maintenance coat.

Greyhounds are also the cleanest of canines and love playing with their human pack.

There tends to be many of these dogs available who have retired from the racing. If so this is one dog that you should 'opt to adopt'. We can promise it will be you on track towards finding a perfect pooch for your home. 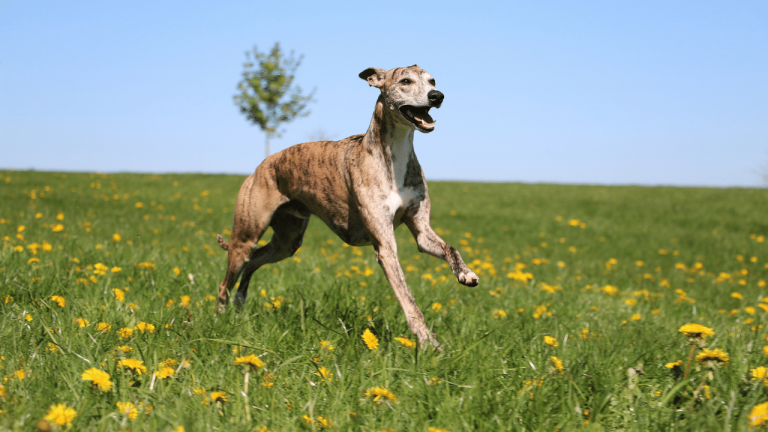 A Greyhound-like coursing hound is represented pictorially in Egyptian tombs from 4000 BC [1] and also in later frescoes and paintings from the Greek and Roman era. Later, these lean sight hounds were recorded in various sources as widespread in Saxon England where they were used by the nobility for hunting in forests. Indeed in 1014 laws were enacted to ensure that Greyhounds could only be used by nobility in woodland to prevent poachers from hunting in the royal forests.

The British monarchy also has a long history with these hounds who were also used for coursing smaller game such as hares. Indeed, King Henry VIII was known to enjoy a bet on this sport and his daughter, Queen Elizabeth I,  first formalized the rules on the sport of coursing hares. This blood sport has now thankfully been banned in the UK and more recently Northern Ireland. But it continues in three EU countries including the Republic of Ireland and is also practiced in Western United States.

The Greyhound’s blazing speed now has a far wider audience than the royal hunting grounds. They continued to be bred for velocity but this became even more pronounced with the advent of Greyhound racing in the early nineteenth century. The modern sport of Greyhound racing is televised around the world where the dogs reach amazing speeds of up to 45mph (72kph).  Interestingly, to do so they adopt the same distinctive rotary gallop gait as the Cheetah.

For many the Greyhound is the breed which typifies the sub-category of breeds called Sight Hounds. The breed was officially recognized as a breed by the AKC in 1885.

The Greyhound is the fastest canine on the planet, but only when he gets off the sofa.  Some owners describe this dog as a 40-mile-an-hour couch potato.  Many Greyhounds aspire to be very large lap dogs who like nothing better than to curl up next to their owners.

The Greyhound makes for a loving and affectionate pet at home. Despite their dynamic image, they are very relaxed and easy-going. These dogs are also generally clean animals. They are wonderful, warm-hearted and playful companions.  Greyhounds are  very elegant dogs not only in the sprint as they often prance a delicate little dance in greeting to their owners.

This low-maintenance dog is highly recommended for first-time owners. Greyhounds are very people-oriented and always eager to please their owners. Like all Hounds they do have an independent streak cultivated by their original role in the hunt. But they will respond very well to consistent training and socialization.

There are always many ex-racing Greyhounds available for adoption.  But they have a very  laid-back nature and aptitude for training.  This allows even older dogs to usually make a successful transition to family and home life.

Greyhounds also rarely bark. This does not make them the best watch-dogs but contributes to a relaxed environment. Although we might normally associate Hounds with a strong prey drive, these dogs can live with smaller pets like cats if socialized from an early age.

This breed can live in apartments as long as the exercise can be put in place. Another advantage of a Greyhound is that they are very sociable and rarely aggressive towards other dogs.

As a very lean dog they do not have much body fat.  This means they will need protection during cold spells of weather with a warm coat.

Greyhounds still do have some prey-drive. So recall training is an important focus for this breed. But generally these dogs respond very well to training. They can be a sensitive breed so a firm but gentle approach should be adopted based around positive reinforcement.

It comes as a surprise to many people but the Greyhound only needs a moderate amount of exercise.  A Greyhound will be happy with around two short walks.  These should offer at least an hour of exercise per day. Remember these dogs are designed for short bursts of speed.  After that this dog is very happy to chill out at home with the family. At rest Greyhounds sometimes adopt what is known as the roach position.  This is when they have four legs up in the air akin to a dead insect (hence the name ‘roach’).

The build of the Greyhound marks it as the quintessential Sighthound. The Sighthound breeds are very distinctive.  They have slender and lengthy limbs with taut muscular hindquarters.  The heads are generally narrow adding to a very streamlined body.

This breed also have deep chests to maximize lung capacity.  This extra oxygenation powers the dog’s explosive bursts of speed.  The elegant neck is long and muscular leading to a gently curving back. The tail is long and tapers towards its tip and is characteristically carried low.

Also grooming for these dogs is undemanding.  The Greyhound has short and glossy coats that only need to be brushed once a week. They do not have much of an odor. Nor do they shed very often, at most a couple of times a year.

But these dogs do feel the cold. Owners should certainly consider investing in a coat during periods of wintery weather.

Greyhounds live up to around 10 years. They are susceptible to muscular injuries and sometimes arthritis as they get older.  Some of the breed suffer from cardiomyopathy.  This is where the chambers of the heart become stretched and thinned. Greyhounds can also be prone to gum disease and tooth decay.  Thus regular dental checkups are essential.