Why get an Irish Setter?

If you like to have hours of fun walking and play with a dog who never really gets tired, the Irish Setter may well be for you.

But be aware that this breed has a reputation for being a little mischievous and is certainly at the difficult end of the training spectrum in this group full of generally obedient dogs.

But persevering with a Setter will prove more than worth it. These are the dogs who just want to have fun. With this dog you and your family will be set for hours of laughter and joy. 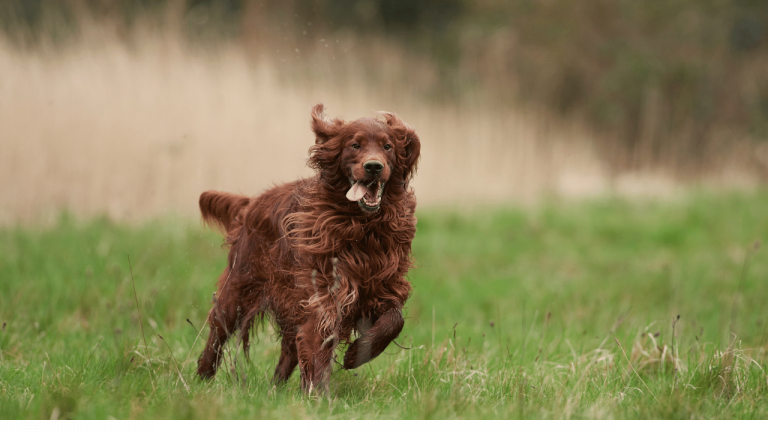 The Irish Setter was developed in Ireland largely to hunt grouse and partridge in the 18th century.  This early version of the setter was a generic red and white breed but later in the 19th century the distinctive red setter breed emerged.  Aside from the striking chestnut color, this breed had a lighter-frame with a longer, leaner head.

These dogs reign supreme at the earliest stage of the hunt in locating quarry.  They have a very attuned sense of smell.  Pointers and Setters distinguish the scent of quarry in the air amidst a bouquet of scents.  In this they also display the qualities of alertness and focus.

To the uninitiated, ‘Set’ and ‘Point’ might be terms usually associated with tennis.  But in the gun dog world they signify a crucial distinction in how gun dogs find quarry.  The names ‘Pointers’ and ‘Setters’ refer to their stance when indicating the location of the game-birds. The former literally ‘point’ with bodies frozen rigidly and with a leg crooked forward. But the Irish Setter, as indicated by its name, ‘sets’  their whole body into a crouch stooping in the direction of prey identified through scent. This stance is called ‘setting’.

In common with Pointers and before rifles, setters identified where the nets should be cast.  They also alerted falconers where to release birds of prey.  But  with the arrival of guns they really came into their own.   These dogs identify the game-birds through sniffing the air and then ‘set’ in a crouch.  The nimble Irish Setter would then also assist in flushing out  the prey.

These dogs have enjoyed a steady rise  in their popularity.  They are currently nicely set at 75th in AKC rankings based on 2020 registration data [1].

Possibly out of all breeds the Irish Setter is the dog that just wants to have fun. The Irish Setter embraces life with a vigorous sense of joie de vivre and will play tirelessly for hours.

These medium-sized dogs are racy looking.  They have a long and lean head-shape, elegant neck and a muscular body.   Their muzzle is deep in keeping with their highly developed sense of smell.

The beautiful red coat is slightly wavy with a silky texture.  There is also some feathering on the underbody and legs.  The grooming required for this dog is only moderate.   Daily brushing is recommended to remove tangles.  It is important to ensure ears are kept clean as part of this routine.  They do shed throughout the year but not excessively.

These dogs love both  canine company at home, and are very gregarious outside with other dogs.  Many breeders even recommend, if practical, a doggy friend at home for this breed.  Irish Setters can also get on with smaller animals like cats.   As with all dogs sensitive and calm, socialization must be put in place early. This will foster harmonious relationships with all animals in and outside of the home.  This tolerant and energetic dog is also an ideal companion for children.

As is common with Sporting Group dogs, this breed has very high cognitive ability.  The Irish Setter thrives on lots of mental stimulation and play as well as exercise.   They will enjoy challenging games, toys and activities.  But they are very reluctant to fetch or retrieve although this was never, after all, in their job description.

A good level of exercise for this breed constitutes around 2 hours per day.  If well-exercised the Irish Setter will be calm and relaxed at home.  It is recommended that you have access to an outside area to allow this tireless dog to burn off energy meaning that Irish Setters are not really suitable for apartments unless there are very frequent opportunities for outdoors exercise.

This will also help with the very acute separation anxiety that these human-oriented dogs suffer.  Training to manage this anxiety is also essential. The Irish Setter is not recommended for owners who need to leave them for long periods of time.

These dogs are also good watch-dogs and will bark an alarm .  The Irish Setter is a very affectionate dog but will be distrustful of strangers at the outset.

Links to other breeds: The English Setter and Irish Red and White Setter are close cousins.  Both these breeds have a deeper muzzle and broader, more domed head.   Another near relative is the Gordon Setter with a distinctive black and tan coat.

By the high standards of the Sporting Group Dogs generally this breed do require a little more effort and patience in training.  The Irish Setter can take a relatively longer time to mature and are prone to be distracted.  This can be attributed both to their high spirits and high intelligence.  This means they require patient and consistent training.  This may present a challenge to the first-time owner and recall training should be prioritized.  The athletic Irish Setters needs exciting  opportunities to exercise off-leash as much as possible.

But this bit of extra effort is certainly worth it.  These dogs are not only fun, but loyal dogs who adore their owners and are very eager to please.  The use of positive reinforcement in the training regime will result in both a loving and biddable dog.

As noted above, helping an Irish Setter with separation anxiety should also be prioritized in any training regime.

The Irish Setter really does have almost boundless energy and needs a very high level of exercise. Owners should aim to allow for a couple of hours walking a day. Even with this, this Setter will benefit from interactive play in a safe, enclosed area.

These dogs will happily play with children but be aware that they are prone to get carried away so small children may find themselves knocked around by an over-zealous fun-loving Setter.

The beautiful chestnut colored Irish Setter is unmistakable as it blazes across fields with its long hair trailing like tendrils of flame. The Irish Setter in keeping with its role in scenting the air tends to hold its head high where its deep muzzle is able to collect scents. The silky drop ears are feathered and low-set.

The Irish Setter’s almond-shaped eyes hold a very gentle expression and owners report that these dogs seem to have a disposition to ‘smile’ in keeping with their affectionate temperament.

This is lean and lithe looking dog with a gently sloping back leading towards a feathered tail that is carried slightly downwards. The irrepressible energy of these dogs is powered by a deep, narrow chest able to take in the great draughts of oxygen to keep this beautiful dog almost endlessly active.

The Irish Setter’s silky coat requires daily brushing ensuring the feathering does not tangled. As part of any grooming routine the ears must be cleaned to ensure that bacteria does not collect within the drop ears.

It is also recommended that the Setter is groomed and clipped professionally every three months.

The average lifespan for an Irish Setter is around 12-15 years.  This is a generally healthy breed but some can suffer gastric torsion and  epilepsy.  These dogs did traditionally suffer from progress retinal atrophy (also known as night blindness).  But successful DNA testing has led to a large-scale reduction in this problem.