Why get a Mastiff?

The English Mastiff is a big dog with a big heart. This easy-going canine colossus is fun, loyal and are excellent with children. But be sure to closely supervise any play because Mastiffs are not only huge but can be a little clumsy.

For an owner willing to spend the time socializing and training this gentle giant they are truly wonderful dogs who will always turn heads on a walk.

But Mastiffs are very sensitive and do not like being left alone. Additionally they will need somebody able to control this powerful dog.

If you have both the time and the space for a Mastiff then you will quickly fall in love with this noble and ancient breed. 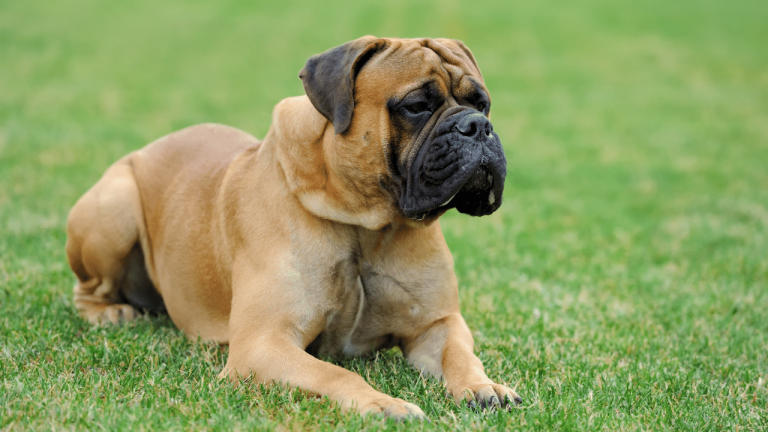 The massive Mastiff is the heaviest dog on the planet. This might have been a blessing in the cruel circumstances of battling bears in the Roman amphitheater.   But it has now become a bit of a curse for this ancient breed as its huge size has contributed to a steep decline in its popularity in the land of its origin, the UK.  This is perhaps because the average home is smaller than in the United States.

But this incredible breed plays an important role in the history of dog breeds and they are still hugely influential.  The Mastiff is in some measure a founding dog for many other breeds.  These include Great Danes and  St. Bernards.  They also probably influenced a range of others including Rottweilers.

This is a very old breed indigenous to Britain that dates back over a couple of thousand years. They descend from the old Molossus dogs which can be seen depicted in Roman artwork [1]. The Romans even had a procurator of dogs in Britain.  This official ensured dogs were obtained and distributed around the  amphitheaters.

The Mastiff continued to be employed in cruel sports through the medieval period.  Like the aptly named Bulldog this breed was used in bull-baiting.

With the thankful demise of these blood sports the mastiff seemed to suffer a steady decline.  After the Second World War it almost became extinct as a breed.   This was largely due to its huge size and food requirements.

Indeed, the numbers became so low that the St. Bernard was necessary to breed them back from the brink of extinction. But  they have not significantly suffered from this partly because the St. Bernard was partly founded on the Mastiff breed.   But some Mastiffs do now bear a resemblance to their saintly cousins.

Since then the English Mastiff has enjoyed a steady rise in popularity in the United States. It is now ranked as the 33rd most popular breed according to AKC 2020 registration data [2]. But it ironically remains on the endangered list of breeds in the United Kingdom [3].

These dogs not only have large bodies, but are also big-hearted and adorable.

The Mastiff is a relatively relaxed and easy-going breed and is happy to jaunt along at a casual pace. This dog will not be begging for long walks.  But like all breeds of dog a good level of exercise is important to its health

They are protective but it will take a lot to provoke this dog into aggression.  This is a huge and powerful dog, but an absolute gentle giant although they are fiercely loyal to their owners.

But Mastiffs are very reluctant biters. This might reflect what was thought to be their ancient role in hunts.  These dogs restrained and delayed big prey while the smaller dogs attacked.   Their default guard mode is to stand in front of their owners.  If needed they then nudge away any perceived threat with their enormous heads.

Yes, these dogs slobber.  But don’t mistake their benign, passive expressions for unintelligence.  These dogs are bright and can be trained to a good standard.  But owners do report that these dogs have occasional bouts of stubbornness.  So consistency, patience and positive reinforcement required.

These dogs are definitely more human-oriented but will get on with other dogs.  Like many other breeds in this group they suffer from separation anxiety so training to mitigate or prevent this should be put in place as early as possible.  The English Mastiff is reportedly also incredibly sensitive to change.  Any kind of disruption needs to be managed very sensitively.

The Mastiff was historically widespread across the world.  This has led to a number of  related variations of the breed including:

These dogs can be trained to a good standard but they have a reputation for occasional bouts of obstinacy and they are also sensitive. This means an inexperienced owner should attend training classes. A consistent approach based around positive reinforcement will work wonders with this dog. Mastiffs are naturally affectionate and will ultimately be keen to please.

A priority in training will be to ensure that a Mastiff ‘heels’ and does not pull on the leash. Otherwise the size and power will make this dog very difficult to manage. Socialization will also be supremely important for a dog of this size, even one with such a balanced and amiable temperament. Play should be very carefully supervised and managed if there are smaller children in the household.

These dogs need a reasonable amount of exercise and should have at least 1 hours walking a day. Many Mastiff owners keep these dogs on the leash in busy areas simply due to their strength and size. They also enjoy a game in a safe, enclosed space where they can run around off the leash.

This huge and muscular breed is very impressive with a long, stout body with a level topline. The robust head is large and wide with a short muzzle which wrinkles when the Mastiff adopts a focused or inquisitive expression.

Additionally these dogs are carried on long, powerful legs with a tail which is characteristically set low.

Thankfully, particularly as there is a lot of area to cover, this dog’s coat is short and easy to maintain. A brush once or twice a week will be sufficient for this breed.

But the wrinkling to the forehead and face should be cleaned carefully on a weekly basis to prevent a build up of bacteria leading to potential infection.

The English Mastiff is renowned for drooling. This means you will need to be prepared with towels or rags at the ready to remove this beautiful bejewelled saliva before it is shaken either you or the furniture.

The lifespan of these dogs is around 8-12 years.

In keeping with a large breed they are susceptible to hip and elbow dysplasia. Some also suffer from gastric torsion. Other health issues for this breed can include eye conditions, cardiomyopathy, ligament damage and bladder problems.