Why get a Neapolitan Mastiff?

If you want a superb guard dog and a loving and affectionate member of the family all rolled up in one wrinkly bundle then look no further that this gentle giant.

The Neapolitan Mastiff is a low-energy dog who only requires moderate exercise. But don't be fooled by the relaxed temperament. this dog is always alert and ready to spring into protection mode. 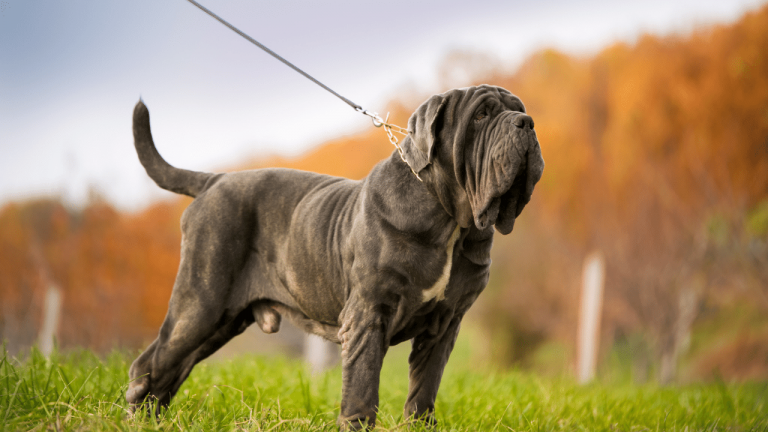 The Neapolitan Mastiff is another one of those breeds that seems to have stepped from the pages of history book into our living rooms. The forebears of the group of dogs known as Mastiffs can be traced as far back as 3000BC in Asia. With the flowing tides of war and conquest these dogs then spread throughout the Middle East and Europe. This dissemination of this impressive dog is then reflected in their adoption by a grouping of Ancient Greek tribes called the Molossians as war dogs and guard dogs. From here the rapid expansion of the Empire created by Alexander the Great of Macedonia led once again to the widespread use of these redoubtable war-dogs.

From here they spread across Classical Greece and later Rome and became known as Molossus dogs. The Romans continued to use them as war dogs but also a protection dog, guarding homes and livestock. They also graced the amphitheatres of Rome as formidable fighting dogs in re-enacted battles. It is thought that other Mastiff breeds, such as the English Mastiff, were intermingled with the Molossus in an early breeding programme to add even more size and strength to the Molossus dogs of Italy.

The Italian Mastiff or ‘mastini’ was a direct descendant of these muscular and large Roman dogs, and became the founding breed for both the Neapolitan Mastiff and the closely related Cane Corso, both continuing to guard homes and protect people across rural Europe.

During the two world wars both these breeds, however, had suffered significant setbacks, possibly due to the hefty food requirements of these large dogs during the hardships brought on by war. By 1946 both these breeds had almost disappeared.

A breeder by the name of Piero Scanziani, having seen some remaining examples of this incredible breed at an exhibition, set about reviving this Mastiff and establishing breed standards. He was so successful in this that the breed was accepted by the Italian Kennel Club by 1949 and soon after by the International Canine Federation in Europe.

By the 1970s the Neapolitan Mastiff started to become popular in Europe and the United States and it was finally fully recognized by the American Kennel Club in 2004 and remains at a respectable ranking of the 100th most popular breed in America according to 2020 registration data [1]. More recently the breed gained some recognition in popular culture as being chosen to represent Fang, Hagrid’s slightly less-than-fearless companion dog in the ‘Harry Potter’ franchise [2].

Since then the Neapolitan Mastiff has very slightly bifurcated into working and show lines. The working lines tend to be leaner and have less skin folds while show dogs tend to reflect more the looks of the original Molossus dogs both bulkier with more skin folds.

In terms of differentiating the Neapolitan Mastiff from the Cane Corso, the Neapolitan tends to be larger and bulkier with a broader head with trademark corrugated folded skin. The Cane Corso has a more streamlined appearance largely without these folds.

As an interesting side note there has been an attempt to re-create the old Molossus dogs in the creation of the American Molossuss, which has been heavily influenced by the Neapolitan Mastiff [2].

This powerful well-muscled dog is certainly very deserving of the title of ‘gentle giant’. This dog has a gentle and affectionate nature combined with a laid back temperament. But at the same time the Neapolitan Mastiff remains a brilliant watch-dog. Even if docile and calm at home this is a very alert dog who has very pronounced guarding instincts and is always alert.

Like its cousin breed, the English Mastiff, the Neapolitans are reluctant to bite unless in extreme circumstances and are more likely to use their bulk and huge heads to move people away if they feel threatened. But they will attack if they sense any fear from or threat towards their human pack. They will also sound a sonorous alarm if anyone unfamiliar approaches the house.

As with most guarding breeds these dogs are fiercely devoted and loyal to all of their family members. They are traditionally a close-quarter guarding breed and do much better if they are kept inside as part of a loving family rather than outside as working guard dogs. Like the Great Dane this breed tend to be huge ‘velcro dogs’ and will shadow their family members and they are tactile and affectionate. They do not cope very well with being left alone and steps should be put in place to prevent or mitigate separation anxiety. They will do well in a multi-canine household although can sometimes clash with other large male dogs as they usually strive to be the alpha dog.

As protective family dogs the Neapolitan is becoming increasingly popular. Their generally relaxed temperaments and comparatively low energy levels (another contrast with the Cane Corso who is a far more active dog) makes them a good large breed to have indoors. They will engage in interactive play, but will not tear around the house causing any accidental destruction. This means that for those owners who seek a protection dog, but are not particularly active, the Neapolitan Mastiff makes an excellent choice. However, more active owners might be better served by the more energetic Cane Corso.

They are excellent with children and will be gentle, although due to their sheer bulk they must be carefully supervised around small children. Owners do report that these dogs are essentially ‘big softies’. The Neapolitan Mastiff is a family dog in the true sense of the word, and is likely to form strong bonds with the whole of the family. Some of these mastiffs can be stand-offish with other dogs, particularly males, but they are generally good with other dogs and rarely aggressive. But this does depend on good socialization strategies to ensure that they fully understand cues so that they do not accidentally hurt smaller dogs.

This Mastiff does not have a high prey drive and is capable of getting on and even bonding with smaller animals like cats. But they should still be socialized to maximize the success of this, and sensitive and structured steps employed when introducing this dog to any new feline friends.

Due to their constant desire to be near their owners, a well-socialized and trained Neapolitan Mastiff can be exercised off-leash. Their striking looks are sure to turn heads in the park (particularly those of any ‘Harry Potter’ fans). But they do share the characteristic Mastiff trait of not being very adaptable to change, so routine will be critical in ensuring this dog is relaxed and confident.

This dog may be low-energy compared to the Cane Corso but still will still need the physical stimulation of obedience training and play. This dog will particularly enjoy any tugging or pulling games.

It will also be important to Mastiff-proof your house ensuring any breakables are placed in a secure position, as well as anything valuable to you, but ‘chewable’ to the Neapolitan Mastiff is placed out of sight. Also any electric cabling is safe and secured out of reach of those powerful jaws. This dog does drool although this is largely restricted to meal times.

The Neapolitan Mastiff can, thankfully given the huge size, be trained to a good standard and are generally biddable dogs. Additionally, they are eager to please and have a mature and balanced temperament.

In keeping with the generic Mastiff temperament, they can have bouts of stubbornness but a gentle and firm approach based around positive reinforcement should produce a dog capable of learning a range of commands although this dog will on occasion push boundaries.

It is particularly important to ensure that the Neapolitan Mastiff is socialized in respect of meeting new people and inviting guests into your home, as well as being gentle and sensitive in play with smaller dogs.

As noted, training to prevent or mitigate separation anxiety should be put in place for this dog as soon as possible to prevent any destructive behaviors when left alone.

As with other large breeds such as the Great Dane, it is important that exercise is managed carefully for the Neapolitan Mastiff when they are young. This means a graduated approach of little and often rather than long walks in order to protect the young dog’s joints and allow bones to fully develop. A puppy or very young dog should also be prevented from running up and down stairs.

A mature dog will have only moderate exercise requirements and a walk of around an hour a day should suffice although this could readily be broken down to two smaller walks of around half-an-hour. This might further be reduced in periods of hot weather.

Be aware that this dog does suffer from bloat, so should not be walked or have intense exercise within an hour of feeding.

The shape of the Neapolitan Mastiff suggests compact muscularity with the body slightly longer than they are tall (by around 10%).

This dog has a very distinctive look with its pronounced wrinkling and drooping eyelids along with pendulous flews (lips) and a deep muzzle. The head is very broad with deep-set eyes that reflect an alert inquisitiveness. The back is level leading to a thick cord-like tail usually carried low. The feet are rounded often with a little fleck of white at the front.

This breed does have a more significant gap in size between the male and the female than most other breeds. The male Neapolitan Mastiff stands at around 27-32 inches (69-82cm), while the female is smaller ranging from around 24-27 inches (61-68cm) from feet to withers. In terms of weight, the male dog usually weighs upward of around 155lbs (70 kg) while the female generally weighs in excess of 105lbs (48kg).

The gait of this dog tends to be heavy and lumbering rather than elegant.

The coat is very fine, short and clean and a good brush a couple of times weekly should be adequate. But it will be important to ensure the folds, particularly around the eyes and mouth, are kept clean in order to avoid infection.

The lifespan of this dog is around 8-10 years.

As very large dogs the Neapolitan Mastiff is susceptible to Coronary Heart Disease, gastric torsion and bloating so avoid exercise for at least an hour after feeding. They can also suffer from eye conditions such as entropion, intropion. Some of this breed do occasionally find themselves afflicted by bone cancer.