Why get an Old English Sheepdog?

The Old English Sheepdog is a loyal friend in good times and bad. They are highly empathetic and absolutely dote on their human 'pack'.

These dogs are large in body but absolutely huge in personality. They are great fun and love to play. But could also be labelled the practical jokers of the dog world. They will particularly enjoy hiding your favorite footwear.

These dogs make a wonderful pet and a good watch-dog barking a deep sonorous alarm and always protective of their nearest and dearest.

They can be trained to a good standard but can be willful and independent. Also they are large and sometimes over-zealous in play so might not suit families with very small children. Also a prospective owner must be prepared to deal with shedding and provide regular grooming.

But this beautiful dog will never let you down and generally makes for a superb, funny and spirited canine companion for life. 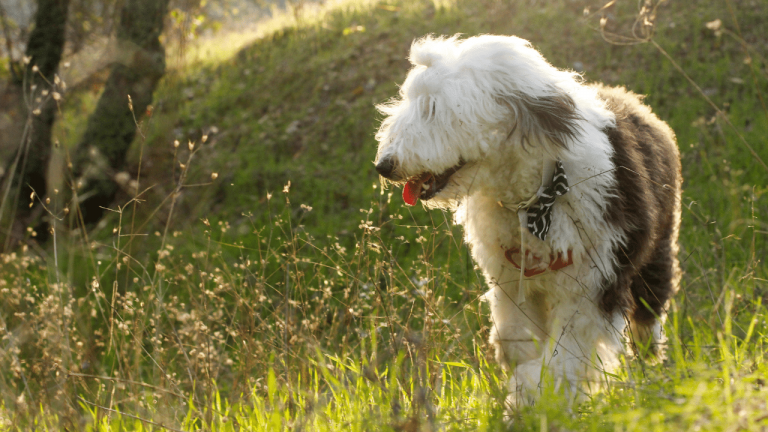 The Old English Sheepdog is another dog with striking looks. However, unlike the Rottweiler or Husky it has fallen out of favor in the last few years in its country of origin.  In the UK joins the Mastiff on the British Kennel Club’s endangered list [1].  This might be due to its size.  It could also be a consequence of the grooming requirements. But its ranking remains healthy in the United States where it sturdily stands at 68th according to the AKC 2020 registration data [2].

It was recognized by the American Kennel Club in 1885.  Since then it has fared better in America remaining at relatively healthy position of 68th according to the 2020 registration data.

This dog was developed during the 1800s in England. It is thought to have been refined from some earlier European sheepdogs.  It has been commented that for many dogs the name is on the tin.  The Yorkshire Terrier is a terrier breed from Yorkshire.  The German Shepherd clearly explains its origins and function.  This is not true of the Old English Sheepdog.  Firstly it was developed from European breeds.  The breed is not that old.  Lastly, it was actually a cattle or drover’s dog.  Its only link is a  woolly coat with a passing resemblance to that of a sheep.

Indeed cattle or drover dogs, the Rottweiler being another example, traditionally had their tails docked.  This was actually to protect their tails from painful trampling.  This led to this breed’s nickname of ‘The Bobtail’.  Thankfully it is now considered cruel to dock their tails for aesthetic reasons. Anybody who owns an Old English will testify to how beautiful and large this tail is.  It rises and arcs over their backs like a grey and white flag waving above the back.

As a consequence of this traditional role, the Old English Sheepdog is placed in the Herding Group in the US, while in the breed is designated as part of the corresponding Pastoral Group of Dogs.  Indeed, it is possible to see how this dog would be completely at home on a farm.  It is an active breed that enjoys space and prefers to lounge outside even in the coldest weather

This dog is instantly recognizable from its striking white and grey fur. This beautiful coat led to it being adopted by the paint company Dulux as its mascot.  As a very proud and blessed owner of an Old English Sheepdog, I am hoping that this will keep the breed in the public eye and contribute to an increase in its popularity back in its home country.

The Old English Sheepdog is friendly, intelligent, and loyal.  They are good guard dogs and are protective of the home.  The sonorous, deep bark and energetic response to visitors, however, belies a very gentle and kind nature.

This generosity of spirit extends to cats and a low prey drive. But if introduced to them as a puppy with careful and sensitively structured training and socialization it is reported that they can live relatively harmoniously with cats.

But these dogs tend to be more human-oriented.  Once again this adds to their suffering due to separation anxiety.  This can be so acute that it can even affect their eating patterns and/or lead to destructive behaviors. This may be another cause for their decline in popularity.  Some of this breed sadly surrendered, and indeed my dog Benji was a rehome.  Training to prevent separation anxiety is a priority with this breed.  Be aware also that this breed of dog does not generally like confined spaces like crates.

Another hallmark of the Old English Sheepdog is its ambling bear-like gait.  They also have a very teddy- bear-like face. These dogs may not be built for speed, but they are very active.  As former cattle dogs this breed requires a high level of exercise.

This huge fur ball is excellent with children and offers a warm and fun-loving addition to any family.  With early socialization and Old English can also cohabit readily with other dogs and smaller pets.

Owners of Old English Sheepdogs often comment on their very ‘human-like’ expressions.  They also seemed to have developed what can only be called a mischievous sense of humor.  Benji has a place on an old sofa.  If anyone else sits there he has been known to scratch on the door to request an exit.

When the person goes to open the door, he quickly doubles back to reclaim the seat.  He also is a master at hiding one shoe of every pair.  So if you do decide on this breed be prepared for some canine pranks!

This sense of good-natured mischief might be the reason that this dog appears in so many humorous films and books.  These include  ‘Digby the largest Dog in the World’ [3].  Also the classic ‘Please Don’t Eat the Daisies’ [4].

But the Old English Sheepdog combines this sense of humor with a reputation for being very empathetic to their human owners, intuitively reading its human owners’ emotions and being a very sympathetic canine friend even on the darkest days.

The Old English Sheepdog is thought to have a common heritage with the smaller Bearded Collie and one theory is that the OES is the product of crossing this smaller Scottish herding dog with larger European breeds.  They certainly have more than a passing resemblance to this more diminutive working dog.

They are a founding breed along with the Poodle of the popular designer dog, the Sheepadoodle.   This mixed breed combines all the size, fun and sense of humor of the Old English with the athleticism of the Poodle and is very popular in the United States and the United Kingdom.

They can be independently-minded so consistent recall training is an absolute must. Also some of this breed will boisterously pull on the leash, so care must be taken to ensure that they are taught to heel and be responsive to the owner.

The Old English Sheepdog is large and can be overzealous in play with both children and other dogs. It is therefore recommended that early and consistent socialization is put in place to mitigate this behavior.

As mentioned, this breed does suffer acutely from acute separation anxiety and training should be put in place for this at the earliest opportunity.

Do not be fooled by the ambling gait of this dog. The Old English Sheepdog, in keeping with its Herding Group heritage, does require a high level of exercise.

It is highly recommended that these dogs receive two good walks of around an hour each day alongside interactive play.

Underneath the fine, long coat the Old English Sheepdog has a robust and compact frame that is designed for the marathon rather than the sprint. The dog as a whole has more length than height. The head is broad and capacious with smallish drop ears. The back is straight leading to a large fan-like tail that curls upward. These dogs have a distinctive bear-like gait which is deceptively easy and fluid.

The lovely double-coat does need grooming every day to avoid matting and tangling.  If the hair is long this grooming could take up to 3 or 4 hours a week.  Ensure this is done even more regularly during periods of hot weather along with other steps to keep your dog cool.

The Old English Sheepdog generally has a lifespan between around 10 to 13 years.

Characteristically for large breeds, some of these dogs fall prey to hip and elbow dysplasia. Other health complications include heart and eye disorders.