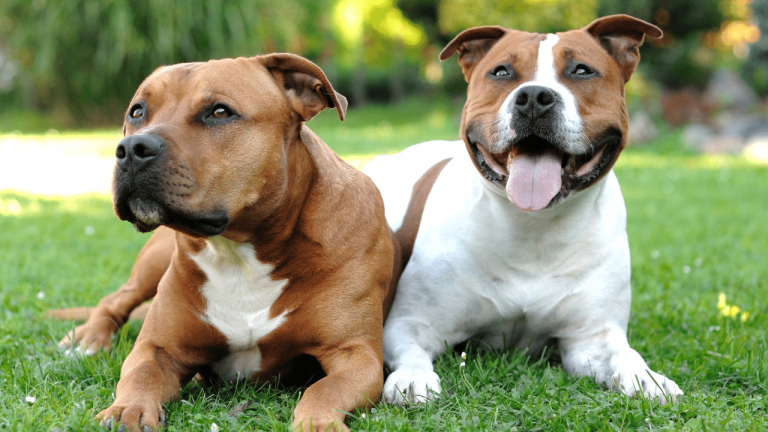 What is a Pit Bull?

The first thing to make clear that the ‘Pit Bull’ is not a breed but a collection of breeds sharing a common heritage. It is, in fact, a ‘catch-all’ term applied to various breeds that originate from fighting dogs bred in the 19th century from crossing the Old English Bulldog and the old English Terrier.

The above mentioned collection of breeds that fall into the ‘Pit Bull’ description are also part of a wider grouping of dogs known as the ‘Bully Breeds’. For an understanding of this we must look into the mists of time, far beyond 19th century England, and right back to ancient dog breeders in Greece, and later Rome, who developed what broadly became known as the Molosser breeds.

These most famously include the various Mastiff and Bulldog breeds, as well as the Rottweiler whose bulk and strength is believed to have been gained from cross-breeding with the Mastiffs who graced the Roman Amphitheaters. It also includes dogs such as the Boxer and even the diminutive Pug, all of whom can trace some ancestry to these bulky and powerful fighting dogs who even accompanied armies into battle as ‘dogs of war’. When Mark Anthony in Shakespeare’s ‘Julius Caesar cries ‘Let slip the dogs of war’, he would have undoubtedly had the a Molosser breed of dog in his mind.

All of the ‘Pit Bull’ breeds have gained this heritage from the Old Bulldog. But unlike many of the other breeds, such as the Mastiff who is now often referred to a gentle giant, this collection of breeds have still been linked to their ancient heritage of dog fighting.

Tragically, although dog fighting was banned in Britain back as 1835 and is now banned across the USA, it is still practiced illegally in both countries. This has led to these breeds occasionally attracting unscrupulous owners and as a consequence their violent past still enshrouds these dogs leading to debates on whether these breeds are suitable for modern life or are whether they are safe to live within the community.

The Pit Bull breeds have their detractors and their supporters who argue that none of these breeds are inherently aggressive and have attempted to rehabilitate them as misunderstood and misrepresented.

Although ‘Pit Bull’ is a heterogeneous grouping the American Pit Bull Terrier and the American Staffordshire Terrier tend to gravitate closer to this term in the general consciousness. Most commentators agree that these dogs are in fact the same breed with the same physical and mental attributes.

The Am Staff officially diverged from the English Staffordshire Bull Terrier in 1972 as it was recognized that the American version had been bred taller along with other small differences, and should be accorded its own distinct breed.

Supporters of this breed point to its heritage as a ‘nanny dog’ relating to its absolute unwavering loyalty and devotion to the family. They are also widely reported as excellent with children and that led to them becoming known as ‘nanny dogs’ as they made excellent protectors of children in the family. Indeed both the Staffordshire Bull Terrier and its Am Staff cousin are to this day recommended as family pets by charities and rescue organizations if they have not been maltreated or abused in any way.

Leaving aside the harrowing and brutalizing practices of dog-fighting, it is important, however, that these dogs are socialized and highly trained to ensure they are entirely biddable. These dogs are also sensitive so any training should be based around positive reinforcement.

Another factor for owners to bear in mind is that these dogs are also relatively slow in maturing than many other breeds. For this reason some of the breed ,may require extra patience and dedication. The payback for such efforts are huge. This dog can make for a loving family dog, although owners should be aware that they can be aloof and distrustful of strangers. They are also very agile dogs who love to play

Without consistent and early training and canine leadership these Terriers can become a menace due to their power and naturally high prey drive, and this can include aggression towards dogs and other animals. Like all other breeds, ensuring that this dog gets plenty of exercise, aside from the physical health benefits, will lead to a happier and more docile dog. Another advantage is that this dog can be suitable for apartment living as long as plenty of exercise is provided and the grooming requirements of this dog are very minimal. Aside from initial investment in training, these dogs can be viewed as relatively low-maintenance canine companions.

But with the right owners the ‘Pit Bull’ can certainly shrug off its violent past and unsavory media image. It is an image which has left these dogs both in the States and the United Kingdom first to have the misfortune to be adopted by inappropriate and callous owners and then often struggling to be re-homed, or even destroyed, as a consequence of prospective families not trusting them and being deterred by their ‘aggressive’ appearance.

Let’s hope that moving forward more can be done to ensure this breed, along with all other dog breeds, get the loving, kind and safe homes that they deserve. There are a couple of links below if you are interested in adopting one of these dogs.