Why get a Pomeranian?

Spitz dogs are not only hardy and athletic. They are also undeniably beautiful.

If you want all of this in miniature then look no further than the pint-sized Pomeranian.

With their boundless energy and cheeky sense of fun they make an ideal companion whether as part of a family or for an individual. They are affectionate and absolutely devoted to their humans. 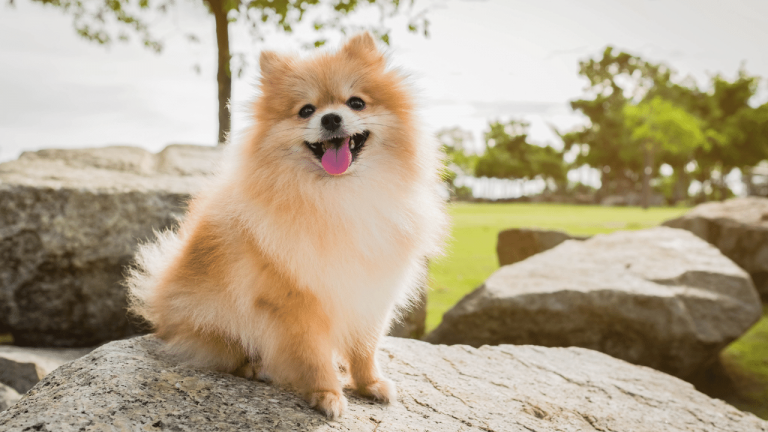 The Pomeranian can surely claim to be the foxiest looking of all breeds. It’s not only a fox that comes to mind, how about an Ewok?  They most certainly resemble the tough teddy-bear faced resistance fighters from Star Wars.

In fact they do have links to a rising Empire.  Not galactic admittedly, but the Roman Empire.  The original larger forebears of the breed came from the Old Duchy of Pomerania.  This is a historical region which fringed the Baltic Sea and in modern geography would now straddle Germany and Poland.  These medium-sized dogs were originally used to herd livestock.  But their striking foxlike appearance gained notice in Rome.  As a result they became companion dogs in wealthy Roman households.

The Corgi may be the modern dog breed of choice for the British monarchy.  But it was the Pomeranian who had the right  royal connections in Victorian England.  The long-reigning Queen Victoria was the original ‘pom, pom girl’.  She became a leading patron of Pomeranians when she became besotted with the breed on a visit to Italy in 1888.   Henceforward these little dogs  travelled everywhere with her.  They even enjoyed the protection of her secret police. She was even reported to have around 35 Pomeranians in the royal kennels.   During this period specialized breeding took place to miniaturize the Pomeranian.

This royal patronage soon led to the founding of the first Pomeranian breed club in 1891.  Official recognition by the American Kennel Club soon followed in 1900.  Since then their popularity has not waned and they achieved 23rd in the 2020 AKC rankings [1].

The Pomeranian is a shrunken Spitz dog.  The Spitz sub-grouping relates to wolf-like dogs.  It  includes: the Siberian Husky, the Alaskan Malamute and the Samoyed.  The word ‘Spitz’ means pointed in German.  These breeds tend to have the triangular ears and sharp features akin to those of a wolf.  The Spitz dogs are famous for being hardy and athletic.  The iconic image of a Spitz, most famously the Siberian Husky, is hauling sledges over miles of icy wastelands.

The dynamic Pomeranian retains this ‘Spritz-spirit’ in pint-sized form.  This breed is relatively speedy and nimble for their size.  They are also hardy little dogs with boundless energy. This sprightly little canine needs to be treated like a real dog with plentiful of opportunities to explore and play. This intelligent little dog also enjoys a challenge so any treasure-hunt games in the garden will invigorate and stimulate this little Spitz.

Like other Spitz dogs, recall can be an issue for the Pomeranian.  This context of this emerges from the original Spitz dogs being prey-driven.  These dogs hunted for their own food inspiring an instinct to chase.   But with early training this should not be a huge problem.

A good exercise regime should also be part of a strategy to prevent or reduce separation anxiety.  Along with recall, this training must be put in place as early as possible.  Spitz dogs and toy dogs are generally human-oriented.  They really suffer without a companion and the Pomeranian falls into both categories.

This little Spitz is also a good watch-dog.  The Pomeranian will  bark an alarm, but the flip-side is they are prone to yap a lot, particularly if unfamiliar people enter the home. Early socialization training should include them getting used to friends and family.  This will ensure that this does not become a protracted problem.

This is another diminutive dog who is not cowed by larger dogs.  But the Pomeranian should be socialized to avoid any aggression towards other canines.  Owners also report that these dogs also need training not to soil indoors.

But the Pomeranian is an intelligent little dog and is highly trainable.  They are also very adaptable. as long as they are with their humans.  So these little dogs are ideal holiday companions

This breed is very affectionate.  But as with all dogs, small children must be ready to learn how to treat them with respect.  They will need to learn cues from the dog signaling that it wants to be left alone.  Otherwise this dog can occasionally snap.

A huge positive is that this breed is hypoallergenic. They do not shed frequently, reducing further the spread of allergy-inducing dander.  This makes them a good dog for first-time owners.

Links to other breeds: The Pomeranian is closely related to the larger German Wolfspitz.

The Pomeranian is a very biddable, obedient and intelligent little dog. They often appear as little stars at training classes and are able to learn a range of commands.

They may have occasional lapses with recall due to their independent and adventurous ‘Spitz-Spirit’, but otherwise are highly trainable and a delight to work with.

The Pomeranian is at the active end of the spectrum in the Toy Dog Group.  They do need a good walk two or three times a day and lots of interactive play.  A well-exercised Pomeranian will be a very well-behaved and contented little dog.

In diminutive form the Pomeranian bears all the hallmark features of a ‘Spitz’ breed of dog adapted for colder climates (Spitz being the German for ‘pointed). This includes the pointed little ears which are layered with dense fur as are the feet. The short neck has a frill of fur around it with almond eyes set above a squared stop. Additionally the tail distinctively curls up over the back.

The double-coat provides insulation as well as the ‘puffed-up’ appearance cloaking within it a well-proportioned and compact little dog.

In keeping with its Spitz heritage, the Pomeranian has a double-coat which has developed into that distinctive and attractive ‘puff-ball’ look.  This is long and requires daily brushing to avoid matting.   Regular cleaning of the area of fur around the eyes to remove any discharge or other dirt is essential.  These dogs should also be bathed every 1 to 2 months.

Another huge plus to these dogs is that they tend to have good longevity.  Many Pomeranians have a life span between 15 and 17 years.

Owners should be aware that they are prone to dental problems.  Some of the breed also suffer from hip and elbow dysplasia.  They can also have luxating patellas (knee-joint pain) and other joint-related problems.