Poodle (Standard and Miniature (aka Caniche)

Why get a Poodle?

It is little wonder that the Poodle has become the founding dog for so many other breeds. Its combination of physical agility and acute intelligence are impressive enough. But combine that with an affectionate temperament and real zest for life and it all makes for an unbeatable combination.

The Poodle might well qualify for the sportiest dog that has ever been labelled Non-Sporting. This breed excels in obedience trials and agility competitions alike.

This all comes bundled with a no-tears hypo-allergenic coat.

A brilliant breed for first-time and experienced owners alike. But be prepared for lots of exercise and ensure you can offer all the mental and physical stimulation that this perky pooch will need. 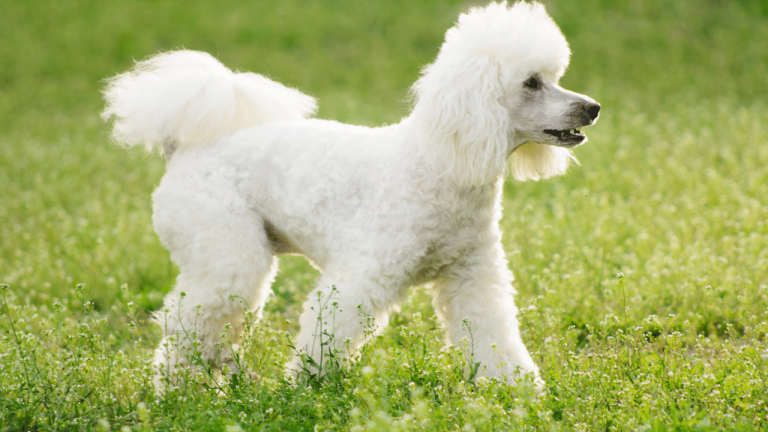 The Poodle may lose out to its compatriot breed, the French Bulldog in the popularity stakes but it can proudly boast the plaudit of being the national dog of France. Although many claim that this breed actually originated in Germany further strengthened by the fact that its name is Germanic.

The name of the breed comes from the German word ‘puddIn’ which means to splash about in the water.  The French word for this dog, Caniche is an abbreviation of chien cunard or ‘duck dog’ referring to a common aquatic quarry.  But it could also have implied that they took to the water as readily as the aquatic birds.  Either way, Poodles still love the water and are excellent swimmers.

The Poodle was such an adaptable and intelligent dog that its activities soon expanded into a number of spheres. These included as guard dogs, messenger and work dogs in military services, police dogs, and guide dogs. As outlined in the Toy Poodle section they also came to the fore as entertainers in the circus, their agility and intelligence equipping them the ability to perform a repertoire of tricks. Their dainty and delicate appearance also won them many hearts among the gentry and the more diminutive of the breed left the muddy retrieval work behind and entered the pampered world of companion dogs to upper-class ladies primarily in France.

Poodles are descendants of the Barbet: an older breed derives from African shepherd dogs mixed with indigenous European breeds.  The first written accounts of the Barbet date back to the 14th century.

The Poodle of today is often celebrated as a triumph of selective breeding.  It ranks as the second most intelligent dog breed behind the Collie.  This refers to Stanley Cohen’s survey of 200 dog breeds based around the successful learning and execution of commands. [1].

This breed is in real terms too sporty to be in the Non-Sporting Group of dogs. Its original function was to flush out and retrieve water-fowl and it was considered a very athletic hunting dog.  The Poodle did everything that a Spaniel traditionally does but with the added complication of water.

The American Kennel Club officially recognized the Poodle in 1888. In the mid 20th century it enjoyed decades of being one of the most popular breeds in the United States. The types of Poodle include the sizes: standard, miniature, and toy.  With such an abundance of intelligence and athleticism this breed’s popularity has mushroomed.  The Poodle was ranked as the 6th most popular breed in 2020 according to the American Kennel Club’s registration data [2].

The Poodle is hyper-trainable and versatile.  This makes them a good all-rounder for the first time dog-owner offering another reason for their continued and increasing popularity.

These dogs are very affectionate and tactile.  They are very active and need a lot of stimulation including interactive play. Additionally, they are fantastic with children as they combine energy with a generally calm and balanced temperament.  It is extremely rare for these dogs to be aggressive.

This means that a Standard Poodle should certainly have access to a safe, enclosed outdoor space, while the Miniature will manage better in an apartment as long as regular exercise is offered.

Also, be mindful that some of this breed can have a strong prey drive.  So introducing recall training early is highly recommended.

The Poodle is a very alert watchdog and will always sound an alarm if somebody approaches.  But they are naturally friendly and non-aggressive.. This does not single them out as the most effective protective guard dogs. Although some have a tendency be a little guarded and nervous around strangers.

A huge added bonus to owning a Poodle is that it is hypoallergenic.  Because their shedding is very light dander is less often released.  Dander is the name given to tiny skin fragments which trigger and aggravate a range of allergies in susceptible people.  This means any member of your family with potential allergies will be less affected.  Yet another reason why this dog is so popular.

It is also a testament to the many virtues of the Poodle that they have become a prolific founding dog.  A range of ‘designer breeds’ are based on Poodle mixes.  These include the Labradoodle, the Sheepadoodle, and the Cavapoo.  Also, what might be my favorite name for any breed of dog, the Peekapoo.  There are many, many others and the list continues to grow.

The Poodle is one of those clever, naughty students in a training situation who can always be top of the class but also has a mischievous side and occasionally like to act the clown. They are very quick learners and can understand a wide range of commands. This makes them a good dog for first-time dog owners who are willing to invest the time in learning how to train a dog.

Be aware that they can be a little sensitive, making it important to offer training that is consistent and based on positive reinforcement.

It must be remembered that these dogs were bred as retrievers. This means that they will need a fair amount of exercise, so expect to provide two reasonably brisk walks each day of 45 minutes or more. Poodles love to play so if possible an interactive session of play or obedience training to keep the energetic Poodle both mentally and physically stimulated.

The Poodle is a very elegant dog which is squarely proportioned with a short straight back and a deep, wide chest. The face is sharply contoured with a pronounced stop and set with oval dark eyes. The tail is generally carried raised away from the body. The legs of the Poodle are long, lithe and athletic.

Another reason for their popularity as a breed and as a founding dog in so many mixed breeds is their hypoallergenic and attractive coat.  These dogs have a single-layered, tightly curled coat that does not shed.  A Poodle still needs daily brushing for longer hair but alternate days will suffice for shorter hair.

A Poodle benefits from a trip to the groomers every 2 months or so and their ears should be regularly cleaned as part of a grooming routine.

Some Poodles do suffer from Addison’s disease and gastric torsion. The larger Standard Poodle is also sometimes prey to hip and elbow dysplasia.

These dogs can be prone to ear infections.  Take care to clean their ears regularly and ensure this is done as part of grooming.  Occasionally some Poodles suffer from epilepsy and seizures.

The Poodle Club of America