Why get a Pug?

The Pug is actually the Titan of the Toy Group. Indeed this dog indisputably had mastiff forebears. Little wonder then that it has inherited the affable, gentle and playful temperament from its much larger founding breed.

It has also inherited the Mastiff slice of stubbornness. But this little dog is always very willing to please and can be trained to an excellent standard.

Although known as the 'grumbling' or 'wheezing' dog they in fact give very little to well, grumble about.

The Pug makes an excellent first dog and a very pleasant companion who won't take up a lot of space if you live in an apartment. 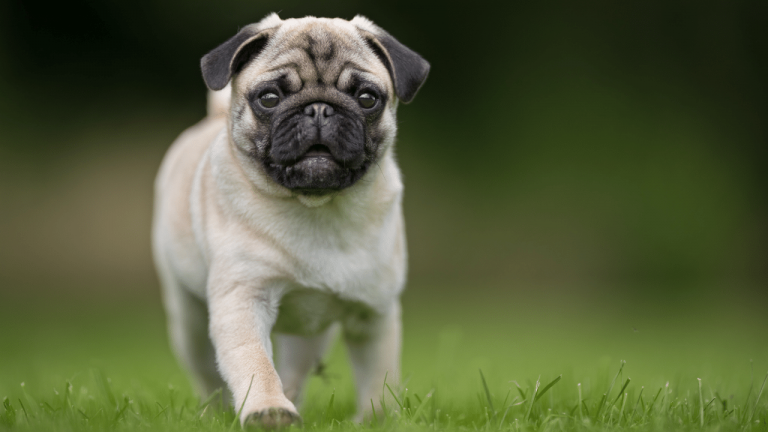 This dog is the largest of the toy breeds.  Yes, the ever charismatic and popular Pug finds itself the giant of the toy world. Although it is thought that this dog can claim somewhat larger heritage in that it is thought to have had Mastiff ancestry and indeed seems to have kept some miniaturized Mastiff features.

It could also claim to have regal connections far older than one of its rival companion dogs, the Pomeranian’s heyday in Victorian England.  Pugs are a very old breed of dog from as far back as 5th Century BC China.  They were reportedly the favored dog of Emperors and the ruling families. Whether by accident or some incredibly artful design their forehead wrinkles resemble the Chinese symbol for ‘prince’.

Other Pugs were known to be living perhaps a more spiritual existence in Tibetan monasteries.  Along with the Pekinese these dogs were recorded as favorites of the Buddhist monks.  Some speculate that these two breeds in fact share a common ancestor.

This breed arrived in Europe largely as gifts along the Silk Road.  These Pugs would probably have been presents from powerful Eastern trading partners.   So through the trading of the East India Company Pugs begin to arrive in Europe around the 16th century.

Pugs later proved particularly popular in the Netherlands. This culminated in it becoming adopted as the dog of the House of Orange.  This partly stems from the actions of a Pug called Pompey.  This little companion dog arguably changed the course of European history.  Pompey barked an alarm as Spanish assassins approached the tent of William of Orange [5].  His importance is memorialized in a statue at the church of St. Ursula in Delft.

When William and Mary of Orange ascended to the throne of England in 1689 they brought their pugs with them.   Enjoying royal favor, the Pug soon gained wider popularity. From then on this adorable breed spread rapidly across England and then to the United States. It is still a very popular little dog and finds itself ranked as the 29th most popular dog according to AKC 2020 registration data [1]. They also consistently feature in the top 10 most popular breeds in the UK.

The collective noun for a group of 3 or more Pugs is known as a ‘grumble’.  Yes they do naturally have a bit of grumpy-looking disposition. Indeed they are known as Mopshond in Holland which translates as ‘grumbling or wheezing dog’.   But this is as affectionate and happy-go-lucky a dog as you are ever likely to meet.  It is thought ‘grumble’ refers to the snorting and grunting sounds they make during their interactions with each other.

The Pug is generally a very easy-going and relaxed breed of dog.  If well-socialized they make superb pets.  They are also very friendly towards other dogs.  This diminutive dog is generally great with children.  With its cute looks and lovely manner the pug has also proven a very successful  therapy dog.  They are a good choice of breed for the elderly or infirm as long as sufficient exercise can be put in place.

Like their relative The French Bulldog (link) they do play hard. But they certainly rest hard afterwards.  A well-exercised Pug will be a very calm and mellow member of the household if it enjoys sufficient exercise and interactive play.

The Pug is an intelligent dog who enjoys interactive play.  They relish mental stimulation.  This will improve their cognition or ‘dognition’ making  them even more receptive to training.  Their mild-manner makes them excellent with small pets such as cats.

Play and exercise are crucial as these dogs are prone to be overweight. It does not help that a Pug will fully exploit its cuteness.  If there was an Olympic sport for begging it is likely that a Pug would consistently be competing for gold.

Like their cousins the French Bulldog, this breed has occasional  bouts of stubbornness.  This may also link to their Mastiff heritage. But this is trumped by their eagerness to please and generally respond well to training.

All of this  makes them an excellent breed to consider for a first-time owner and this, alongside their suitability for apartment living, contributes to their continuing popularity.

In short if you choose this breed as a companion, you will find very little cause to ‘grumble’.

It is important to emphasize recall in the training as this can be an issue for some of this breed. But in general despite the occasional bout of stubbornness noted above, these dogs are highly trainable and always very eager to please their human companions. This means they will not only be able, but also willing to learn an impressive range of commands.

Pugs get very lonely and perhaps ‘grumble’ without their human companions.   So training for separation anxiety must also be introduced early.

The Pug only needs a moderate amount of exercise. They will generally require a walk of around 20 to 30 minutes each day along with an opportunity to amble around in the garden or play with the family.

The Pug has a ‘squashed’ muzzle with large, protruding eyes. It bears, however, its Mastiff heritage in having a relatively large, broad head. But the Pug only has small button ears with the flaps folding forwards.

The Pug also has a short springy tail.  This is a well-built, compact little dog and is strong for its size with a thick neck and broad chest.

They have low-maintenance short fur which should be brushed around twice a week. Although in hot weather try to brush them every day to help with cooling (link).

Pugs have a good life-span, and can live up to around 15 years.   They are Brachycephalic which means they cannot gain sufficient cooling through panting.  This carries with it the risk of heat stroke unless you take steps to keep them cool. Remember to moderate any exercise for this dog during periods of hot weather.

The folds on the face and the muzzle of a Pug should be regularly cleaned to avoid the build-up of bacteria.  This will prevent skin infections.  Also a Pug’s claws should be clipped regularly to ensure their comfort when walking.  The Pug has protruding eyes which can also be vulnerable to injury. This means that small children must be trained not to go near the area around their eyes. Some Pugs have protruding lower jaws (called underbite).  This does need timely treatment or it  could lead to painful complications for your dog.