Rottweiler (aka Rottie)  (aka ‘Butcher’s Dog’)

Why get a Rottweiler?

This breed of dog is strong, muscular and athletic. But with a naturally even temperament and a very acute intelligence which makes it an absolute joy to train for an experienced owner.

First time owners must be willing to put in the training and ensure this dog gets all the socialization that it needs.

The result will be an affectionate and happy family dog as well as an excellent guard dog.

Additionally these dogs manage being left alone more readily than most other breeds.

The Rottweiler is devilishly handsome dog who will prove a wonderful canine companion but within and outside the house. 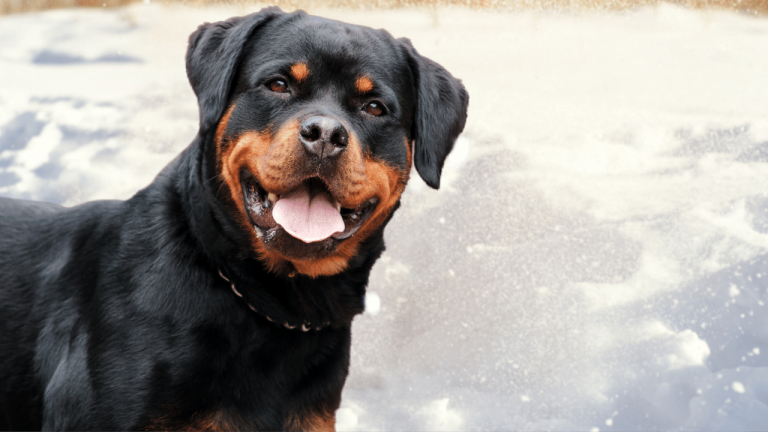 There is, in fact,  a strong possibility given the strength and size of the Rottweiler of some early interbreeding with Mastiffs.  If so, history has now repeated itself with the aptly named Roman Rottweiler.  This variation demonstrates more recent breeding with mastiffs.  They stand slightly larger than the standard ‘Rottie’, but are the same in all other respects.

The Rottweiler is also believed to have swept around 14th century Germany with the order of Swabian Knights.  Their primary purpose here was the dangerous occupation of boar hunting.

The Rottweiler fully proved its worth during WW1.  It was a reliable messenger and deliverer of medical supplies.  This breed  also proved adept at using their tracking skills to locate missing and wounded men. To this day Rottweilers have proven themselves to be expert trackers often winning tracking competitions.  This is in keeping with its heritage as a capable hunting dog of yesteryear.

Later in the 20th century this attractive breed became established and popular.   The American Kennel Club first recognized it as a breed in 1931.  The UK Kennel Club followed suit in 1965.

This breed was originally named after the German town of Rottweil.  Its function, like the Old English Sheepdog in the UK, was as a cattle or drover’s dog.  But, this versatile and muscular breed was also sometimes employed pulling carts.  It was known as the ‘Butcher’s dog’ in Germany for its role in helping deliver the meat.  It also proved an excellent guard of the shop whenever the butcher was absent.

Doberman Pinscher (Rottweiler is one of the founding breeds); Mastiff – most dog experts claim the Rottweiler is a blend of Mastiff breeds and European Herding Dogs.

This dog is not just brawn; it also has plenty of brains.  In Stanley Coren’s ranking of intelligence this breed appeared in the top 10 [1]. The Rottweiler is highly intelligent and responds very well to training.  The Rottie is highly valued for its versatility.  Here it rubs its muscular shoulders with dogs like the German Shepherd and the Doberman.  It is an alert dog which has been used for a variety of purposes in the military and police services.

This breed does have  a fearsome reputation.  Perhaps the high point of this was its appearance as the devil’s own dogs in ‘The Omen’ [2] .    Various cameos as fearsome guard dogs to nefarious criminals quickly followed. Admittedly the Rottweiler is devilishly handsome.  The breed is also devilishly clever.  But invariably for Rottweiler owners these dogs are more akin to guardian angels than demonic dogs.

Indeed, with the right socialization this is a relatively calm and balanced breed. Rotties have a very even temperament and make excellent and loving family pets.  They are very tactile and always enjoy a fuss and a cuddle.

At the same time they are excellent guard dogs and are fiercely protective of their human family.  Their hunting heritage means these dogs are very active. This means a good level of exercise and stimulation is essential.  If these intelligent dogs are under-exercised or under-stimulated you may well have a problem on your hands. In such circumstances these dogs can  be destructive in the house.

These dogs fiercely love their families.  But their calm disposition and independence does give them resilience when left alone in the house although training for separation anxiety should still be put in place. This is an uncharacteristic positive in the Working Dog Group of breeds.

The Rottweiler is a very intelligent dog which can learn a range of commands and are often the stars of puppy or dog training classes. But their natural guarding instinct can make them aloof towards both people and dogs with whom they are not familiar.

But with early and consistent socialization the Rottweiler makes for an excellent dog as they have naturally even temperaments despite their undeserved reputation. The training regime should be firm but sensitive in order to achieve an obedient who reacts to a range of situations calmly.

They are more resilient to being left alone than most other breeds, but should still receive separation anxiety training to avoid them developing any destructive habits.

In keeping with its cattle-herding history the Rottweiler needs a good level of exercise with at least 1.5 hours walking each day. They are also perfect companions for joggers as they can happily run for miles.

The Rottweiler has a thick set, muscular body which belies a very agile and athletic dog. The impression of stockiness is added to by their deep chests and broad heads. The deep muzzle and accentuated stop giving their faces handsome definition.

Like other cattle-driving dogs their tails were traditionally docked although this practice has lost favor in the United Kingdom where they are now more often found with their think slightly curling tail.

The beautiful, short black and tan coat is very low maintenance, infrequently shedding and only requiring occasional brushing. But this should be done more regularly during periods of hot weather along with other steps to keep them cool.

The Rottweilers typical lifespan is between 8 and 11 years. Like many other large dogs they can be prey to hip and elbow dysplasia. Some do suffer from gastric torsion and cardiac problems.