The Siberian Husky (aka Artic Husky)

Why get a Siberian Husky?

Looking for an athletic companion who likes easy conversation? The Siberian Husky might be your breed of choice.

This beautiful and athletic dog is also always eager to please and companionable with both dogs and humans.

But be aware that this Husky may want to chase small pets due to its high prey-drive. Also these dogs can be stubborn and difficult to train without a consistent approach

This is a dog who will need a lot of your time. Any owner must be prepared to do a lot of outdoor walking. Also the Siberian Husky will not be suitable for an apartment but requires a safe, enclosed outdoor space in which to chase around.

This Husky is sociable and chatty. Little wonder then that it hates to be left alone. This dog will only suit owners who are able to be with their dog for most of the day.

These dogs can be stubborn but the extra time and patience put into training will be amply rewarded with a beautiful and amiable family pet. 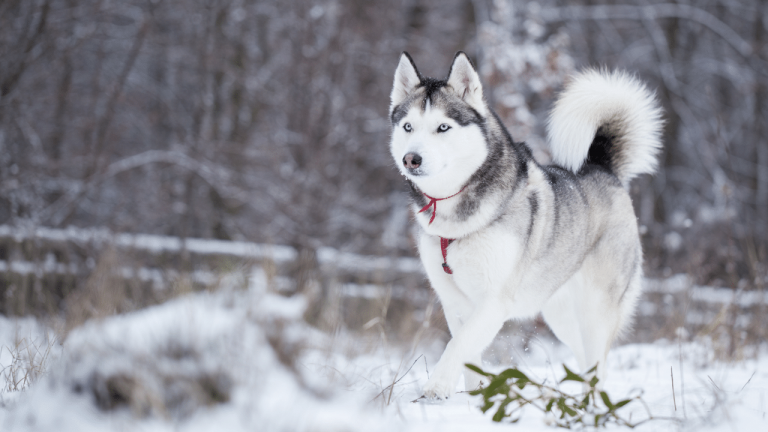 If these dogs had a theme tune it would surely be Springsteen’s ‘Born to Run’.  They are certainly the boss of the long distance run.  Their only competition for endurance being the Alaskan Malamute.  These incredible animals can run anywhere between 20 and 40 miles a day whilst pulling fully laden sledges.

As the name implies these hardy dogs hail  from Siberia in North East Russia.  They arrived in America along with the Gold Rush and were clearly the ideal companions for wide-ranging and sometimes very lonely explorations.  Particularly in vast areas of unchartered territory in inhospitable climates.

These dogs are the most popular members of the sub-grouping ‘Spitz’ type of dog.  This word means ‘pointed’ in German and clearly reflects their very wolfish features.  These dogs also have the appearance and coloring of wolves marking them out to be an ancient breed.  They are specialized to live in harsh, cold climates.  The Husky is not only swaddled in a heavy coat but also enjoys fur-protected ears and feet.

The Siberian Husky is also famous for the striking blue eyes often found in the breed in a cute way rather than in an ice-zombie from ‘Games of Thrones’ way. Interestingly this ‘heterochromia’ also occasionally occurs  in other breeds including: the Old English Sheepdog, Border Collies and Corgies. For any biology geeks, this is due to a genetic change or mutation near a gene known as ALX4 on canine chromosome 18 [4].

It probably does not need to be said that any prospective Husky owner must have the time and commitment to offer their dog a lot of exercise.  Also be aware that recall is often an issue in this breed.  Their instinct to chase and run very often overcomes their training.  This is not helped by their unparalleled stamina and speed.  This practically means that huskies cannot be released in unconfined spaces.

Even in confined spaces these dogs have proven excellent escapologists.  Not only can they leap, but they are champion climbers in the dog world.  If this fails they are also adept at digging their way out.  If you don’t want a Great Escape on your hands then a husky owner must  ensure that all outside spaces are secure.

But  with plentiful exercise and stimulation the Siberian Husky has all the makings of endearing and treasured pets. They also require a comprehensive approach to socialization training. But they are by nature very pack-oriented and do not like being left alone.  This means separation anxiety training is a must for these dogs.

The closeness and dependency they feel to their humans is also reflected in their very ‘talkative’ nature. They have a very distinct and wide repertoire of sounds.  Expect a Siberian Husky to use these freely  as they enjoy frequent chats with their owners.  They are very good with children and are protective towards them. Also they can successfully be introduced to other dogs in a household as long as this is done sensitively in managed steps.

Be aware that you will often find your clothes and furnishings often covered in white hair.  Your home will require frequent and thorough vacuuming.  These dogs really need to be groomed twice a day to remove dead hair.  This is also particularly important in the heat to help keep your Husky cool. For further methods to keep your dog cool in hot summer months then click here.  Also be aware that these dogs molt twice a year.

A heart-warming read for any Husky owner is, of course, Jack London’s ‘White Fang’[5]. The eponymous wolf-dog hero is one-quarter Siberian Husky  Or you could enjoy the film but only if your garrulous husky won’t talk over it! [6].   The part-husky wolf-dog has to navigate the complexities of wild and domestic life and the challenges he faces might lead you to give your husky an understanding pat even as you reach again for the vacuum.

These dogs are independent and are not the most receptive breed to training. Recall training can be an issue as they not only love to run but also generally have retained a high prey-drive. Some will not hesitate to chase cats or other small animals. It is also important to train them not to pull on the leash as these dogs were originally bred to lead the way.

But they can be socialized in order that their companionable gregarious instincts be fulfilled with canine playmates without their exerting dominance on other dogs. This will also mitigate any aggression to unfamiliar dogs. The Husky does have a strong desire to please their human companions which lifts them into average difficulty in training. But inexperienced dog owners are highly recommended to attend training as these dogs can be stubborn and difficult without consistent training.

The Siberian Husky must also undergo training to prevent separation anxiety. This is particularly important for this breed who absolutely hate being left alone to avoid them becoming destructive in the house.

The Siberian Husky requires a significant amount of daily exercise. This should include around 1.5 to 2 hours walking a day. Alongside this they should have the opportunity to play and chase around in an enclosed area if possible.

Huskies are ideal dogs for those who enjoy active outdoors pursuits. They will jog along for miles effortlessly with human companions who enjoy running.

The Siberian Husky is a very striking Spitz (or ‘pointed’) dog and in keeping with this has what might be described as ‘wolfish’ features as well as a layer of protective furring on the ears and on their feet between the pads. The ears are triangular and high-set with a slight rounding to the tips.

These dogs are athletically built with powerful thighs and straight backs with a fox-shaped head and a fox-brush tail. Huskies also have elegantly arched necks. The almond-shaped eyes can be strikingly blue or brown and heterochromia (differently colored eyes) is common in this breed.

It is a surprise to some that the grooming requirements of a Siberian Husky are only about average. Most of the time two or three brushes a week will suffice. During periods of molting this will need to be increased to once or twice daily.

The Siberian Husky should be kept as cool as possible in hot weather. This should include a daily brush to remove dead hair and aid air circulation. Please click for more tips on how to keep your dog cool.

This very athletic dog has a good lifespan of generally between 12-15 years. There are no breed specific health conditions although some dogs can suffer from hip and elbow dysplasia. Some are also prey to eye conditions such as cataracts.

The Siberian Husky Club of America