Why get a Tibetan Mastiff?

The Tibetan Mastiff is a hugely powerful dog but is also low-energy with a gentle and relaxed temperament.

If well-socialized these dogs can make fantastic family pets, and are generally not aggressive towards other dogs and animals.

They do need a high level of canine leadership so may not suit novice owners. But these intelligent dogs can be trained to a very good standard. 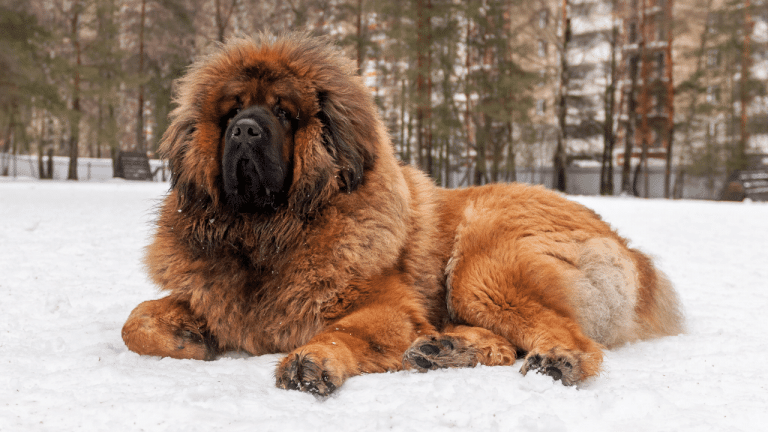 The History of the Molosser breeds

In order to have a full understanding of the lineage of the Tibetan Mastiff it is necessary to understand the emergence of the Molosser breeds from which they descend.

The forebears of the group of dogs known as Mastiffs can be traced as far back as 3000BC in Asia. With the flowing tides of war and conquest these dogs then spread throughout the Middle East and Europe. This dissemination of this impressive dog is then reflected in their adoption by a grouping of Ancient Greek tribes called the Molossians as war dogs and guard dogs. From here the rapid expansion of the Empire created by Alexander the Great of Macedonia led once again to the widespread use of these redoubtable war-dogs.

From here they spread across Classical Greece and later Rome and became known as Molossus dogs. The Romans continued to use them as war dogs but also a protection dog, guarding homes and livestock. They also graced the amphitheatres of Rome as formidable fighting dogs in re-enacted battles. It is thought that other Mastiff breeds, such as the English Mastiff, were intermingled with the Molossus in an early breeding programme to add even more size and strength to the Molossus dogs of Italy.

The History of the Tibetan Mastiff

The Tibetan Mastiff is seen as one of the very ancient breeds of Mastiff and some speculate that they have historically had a profound influence on the other Mastiff breeds, and dogs like these would have counted among the Asian Mastiffs that found themselves established in Ancient Greece through trade. So it could be argued that a breed of dogs similar to the Tibetan Mastiffs even pre-date the Molossus dogs from which all other Mastiffs descended.

The Tibetan Mastiff has been roaming the hills of Tibet for many centuries protecting livestock and guarding homesteads as well as public buildings such as monasteries. These fearsome dogs, who at the time were renowned for their ferocity, were also known as ‘Do Khyi’ or ‘tethered dogs’ indicating how they needed to be kept controlled in the day but were unleashed to roam with the flocks or at night as necessary in their role as watch-dogs.

The size and power of these dogs was a cause for admiration amongst Western visitors to the region. Notably, Marco Polo who visited Tibet in the 1200 who reported that these dogs were the size of ‘donkey’ and had the booming ‘voice of a lion’.

In 1828 records show that a Tibetan Mastiff was paraded at London Zoo. But a bigger landmark for a higher awareness of these dogs in Europe was when the Viceroy of India sent a Tibetan Mastiff called Siring to Queen Victoria in 1847, a monarch with a reputation for enjoying promoting dog breeds, such as the Pomeranian.

But this breed failed to take hold until a Tibetan Breeds Club was founded in the United Kingdom in 1931. It was not until the 1970s that this huge breed gained a paw-hold in the United States only becoming a recognized breed in 2005 and are currently the 140th most popular breed in America based on 2020 registration data according to the American Kennel Club [1].

This ancient formidable breed has a very gentle temperament and for those families with sufficient space, can make a wonderful family pet.

Although many commentators as far back as the 12th century commented on the ferocity of this large breed, like the other Mastiff breeds, these dogs are now recognized for their gentle and affectionate temperaments.

But the Tibetan Mastiff still makes an absolutely excellent guard dog for the family. Their protective instincts are still very strong and they will immediately go into protection mode if they sense any fear from or threat towards their human family. They will also sound a deep, booming alarm if they sense a stranger nearing the house. These dogs do have a reputation for barking frequently, in keeping with their guardian role, but this can be moderated through socialization to familiarize them with a range of sounds and build their confidence with welcome visitors.

As with most other Mastiffs, this breed tend to be huge ‘velcro dogs’ and will shadow their family members and they are tactile and affectionate. This comes from their traditional role as close-quarter guarding breed, and now do much better if they are kept inside as part of a loving family rather than outside in something akin to their ancient role as ‘tethered dogs’. In fact this huge breed do not like being left alone and conscientious owners will need to put in place structured training to prevent or mitigate separation anxiety.

It is also important to be aware that any prospective owner of this glorious breed will need to Mastiff-proof their house.

With guarding and herding roles in their heritage these dogs have developed the necessary independent-thinking skills that would have allowed them to fulfil these roles. This means they are very task-oriented and will need an owner willing to invest in consistent obedience training. This independent streak combined with the huge bulk of this dog will also be important to ensure that this dog is entirely biddable on walks and generally outside of the house. Although they are generally not aggressive, some males can show domineering behavior towards other male dogs, so this awareness should be factored into socialization and training.

The Tibetan Mastiff sits at the low-end of the active scale alongside the Neapolitan Mastiff, which means they will enjoy the mental and physical stimulation of interactive play, but are unlikely to run around the house causing any accidental destruction. Therefore if you want a large guarding breed who makes a good family pet, but are not particularly active, this may be the breed for you. But they will require owners strong enough to manage this powerful dog on the leash.

The Tibetan Mastiff is not suitable for apartment-living and will do best in a home with a fair-sized outside area in which they can ‘patrol’ and play. But be aware that this dog can be a good escapologist, capable of leaping over, pushing through and digging under fencing so owners should be doubly careful to secure the perimeters of their property.

These dogs do not have a high prey drive, as hunting was never part of its historic functions, in contrast with some of the European Mastiffs. But due to the sheer size of this dog, consistent socialization will need to put in place if there are smaller dogs or cats in the household and in preparation for meeting other dogs out in the park. For information on introducing a puppy to an established dog please click here. For a sensitive and structured approach to introducing a puppy to a cat please click here.

They are excellent with children and will be gentle, although due to their sheer bulk they must be carefully supervised around small children. Owners do report that these dogs are essentially ‘big softies’. The Tibetan Mastiff is a family dog in the true sense of the word, and is likely to form strong bonds with the whole of the family. But in common with most Mastiff breeds, including the English Mastiff, this dog is a creature of routine and does not like too much change.

The Tibetan Mastiff does have an independent streak, but is at the intelligent end of Mastiffs and can be trained to a very good standard. With this very large and powerful dog it is important to establish yourself as a canine leader and to start consistent socialization as early as possible.

Despite their majestic size these dogs can be a little sensitive. This means it is necessary to adopt a patient and a gently firm approach can be trained to a very good standard and learn a range of commands. As a working dog they will fully enjoy obedience drills, scent trails and interactive play.

A training regime based around positive reinforcement will have excellent results and produce a generally biddable dog. Additionally, they are eager to please and have a mature and balanced temperament.

Socialization and training should foreground sensitivity towards smaller dogs and other animals like cats. Also in getting a puppy and young dog used to welcome guests at the home.

As already noted, these dogs are bred to work closely with humans in both protection and hunting, so training to prevent or mitigate separation anxiety should be put in place for this dog as soon as possible to prevent any destructive behaviors when left alone.

The Tibetan Mastiff is at the low end of Mastiff spectrum in terms of exercise and around one hour of walking on the leash should suffice for a fully-grown dog alongside interactive play and an opportunities to patrol outside.

As with other large breeds such as the Great Dane, it is important for Mastiffs that exercise is managed carefully when they are young. This means a graduated approach of little and often rather than long walks in order to protect the young dog’s joints and allow bones to fully develop. A puppy or very young dog should also be prevented from running up and down stairs.

The Tibetan Mastiff is known for a leonine appearance in having an impressive mane of fur around the neck and shoulders. Characteristically of Mastiffs, the head is large and broad, usually with tan blotches above the eyes and some wrinkling on the face. This head is crowned with high-set drop ears, and set with almond brown eyes.

The muscular and compact frame shows a straight top-line leading to a bushy tail that curves over the back. The powerful legs lead down to cat-like feet.

The male Tibetan Mastiff stands at around 26 inches (66 cm) at the shoulder with the female only slightly shorter at approximately 24 inches (61 cm). The male weighs in excess of 100 lbs (45+ kgs) with the female weighs at least 80lbs (36+ kgs) or more.

The Tibetan Mastiff has a beautiful long, lavish double-coat, the thermal undercoat being soft, with the hard-wearing outer coat having a stiffer texture.

This coat will require daily brushing to remove dead and untangle any matting.

The lifespan of the Tibetan Mastiff is between 10-14 years offering relatively good longevity for a Mastiff breed.

As very large dogs the Tibetan Mastiff is susceptible to Coronary Heart Disease, hip and elbow dysplasia and sometimes hypothyroidism.

The Tibetan Mastiff can be susceptible to the heat so it is important to take steps to keep your dog cool.

In order to maintain this dog’s health it is also very important to avoid overweight to avoid extra strain on organs and joints.