Why get a Toy Poodle?

The perennially popular Poodle comes in three sizes. But if you want to the most portable Poodle of them all then you will opt for the Toy Poodle.

This diminuitive dog can do it all. A master of tricks in training, a passable little watch-dog as well as a loving and affectionate companion.

The Toy Poodle is an excellent choice for first-time dog owners who are willing to keep up with their pet and attend training classes. They are also suited to apartment living.

But the Toy Poodle is still a Poodle. An owner must be prepared to ensure this active dog is well-exercised and mentally stimulated. Otherwise this perfect little Poodle could transform into a tiny terror. 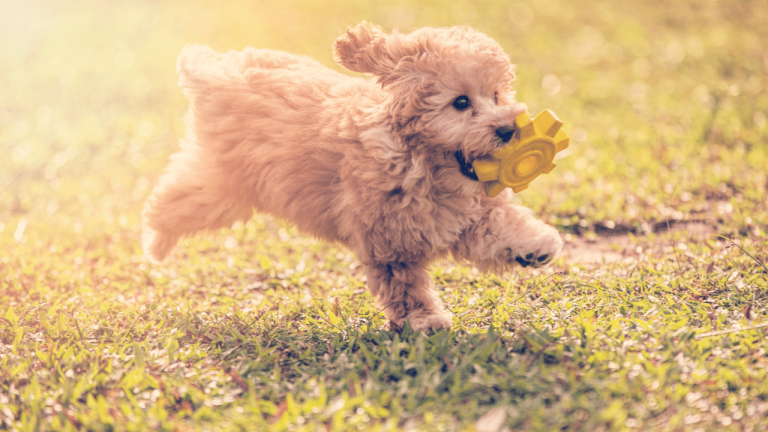 The Pug may have been  favored amongst royalty in Holland.  But it was the Toy Poodle who adorned the decadently ornate royal courts of France.  This pint-sized Poodle was popular between the reigns of Louis XIV and Louis XV1  (during the 17th and 18th centuries).  The Toy Poodle then also has royal connections.  This certainly played its part in securing an important accolade for the Poodle.   This breed is celebrated as the National Dog of France.

This miniaturized version shares all the history and character of its larger brethren, the Standard Poodle(link). The Poodle was an accomplished hunting dog:  as an excellent swimmer the poodle would flush out or retrieve waterfowl.  Its name ‘puddeIn’ which is the German word meaning to splash in water.  Although the French call the Poodle ‘Caniche’ meaning female duck.  This term related to its quarry.  But it could also have signified how easily this impressive dog took to water.  Is your Toy Poodle fond of splashing through puddles?  If so try to remember that your little dog is just enjoying its heritage!

In the 19th century the smaller Poodles left the hunt for the circus.  Their high trainability and natural athleticism made them popular at the circus.  By 1907 the name Toy Poodle was being used generally for the very small Poodles.  But it was in the states that this further downsizing took place.  The Toy Poodle became an instant hit.  By the 1950s the Toy was accepted as an official size by the American Kennel Club (the height must be under 11 in).  Any Poodle slightly larger than this is categorized as a Miniature Poodle (link).

The Toy Poodle is a very popular little dog.  It has all the blessings of a Toy or Companion Dog combined with the virtues of the acutely intelligent and versatile Poodle (link).  It is certainly a significant contributor to the consistent popularity of the range of Poodles.  The AKC rate the Poodle as the 7th most popular breed according to 2020 registration data.

This is largely for the same reasons that make the Toy Poodle in itself a fantastic breed.  They are highly recommended for the first-time owner.  As indicated by its hunting and circus legacy this is a hyper-trainable dog.  The Toy Poodle is also very active and athletic.  This breed numbers among the more energetic of this group and requires two or three walks every day.

This Toy Poodle tends to be very adaptable.  They are very suitable for apartments.   Although they can be very sensitive to noisy environments. These dogs will, however, bark an alarm if they hear anyone unfamiliar approach the home.

Another huge bonus is that these breeds, like all Poodles, are hypoallergenic.  This means that it does not shed much.  This reduces the release of small shards of skin called dander.  As a consequence allergic reactions are minimized .  The coats can be a variety of solid colors but breeders have striven to avoid spots or patterns of any kind.

The Toy Poodle is an excellent companion dog. But it really does not like being without its human companion(s).  Early training to manage separation anxiety is essential.  This will  prevent unwanted and persistent yapping and  destructive behaviors.

As a very human-oriented dog, some of this breed do not naturally get on with other pets.  This can be supported by early and effective socialization. This is also a very portable Poodle making it an ideal travelling companion for any adventure or walking-based vacations.

Links to other breeds: The Toy Poodle is a founding breed for so many of the new designer-breeds.  These include: the Yorkie Poo, the Malti-Poo, Westiepoo and Cockapoo.

The Toy Poodle is consummately intelligent and will absolutely ace training. As indicated by their development for use in the circus, they combine both agility and intelligence allowing them to perform any number of tricks and training exercises with aplomb.

This little dog is also a master of any agility based dog trials. The Toy Poodle will very rarely let you down if well-trained and socialized and will be happy to show off its repertoire of skills at the park.

The Toy Poodle is another companion dog that gets very lonely when without a companion. It is imperative that training to mitigate or prevent separation anxiety should be put in place at the earliest opportunity.

The Toy Poodle is a very energetic and active dog who will always be keen to play. This dog should have one walk each day that exceeds half-an-hour. Alongside this as much interactive play as possible including searching challenges, toys and dog puzzles should be available to keep your little Poodle as stimulated as possible.

The Poodle maintains all the elegant, squared proportions of its larger versions in a neat smaller package. Originally a water-based retriever, the Toy Poodle is a model of streamlined athleticism. The short, strong back is level and the straight tail carried high.

This breed is delicately attractive with dark, oval eyes set in well-sculpted face with sharply defined stop and narrow muzzle. This lovely face is framed by long, delicate drop ears.

Daily brushing is still recommended, particularly during spells of hot weather.  Poodles can be susceptible to hot weather.  Owners should take measures to ensure they remain cool.  Ears should be cleaned regularly as part of the grooming routine.  This will avoid fungal infections

The Toy Poodle has a respectable life span of between 12 to 15 years.

In health terms they can suffer from eye problems such as cataracts and Glaucoma .  Some have been known to develop epilepsy and hypothyroidism.

The Poodle Club of America