Why get a Weimaraner?

This beautiful dog, known as the 'grey ghost' is a hauntingly beautiful animal who absolutely excels in training and at any form of obedience work.

They have a fun-loving and gregarious temperament making for a devoted and faithful family pet. But just be aware that they can be boisterous in play so interactions with small children must be carefully managed.

These dogs are best suited to active owners who enjoy lots of exercise or outdoor pursuits as they have tireless levels of energy. So for any joggers or hikers out there, the Weimaranar will make a perfect pet. 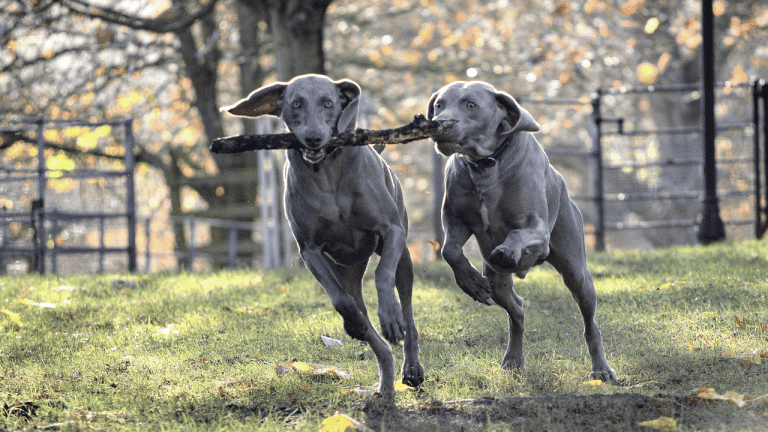 This breed hails  from the Weimer republic in Eastern Germany.  Here in the 19th century it became celebrated as an impressive all-round sporting, or Hunt-Point-Retrieve (HPR dog) and named the Weimaraner Pointer.

It is documented as taking on a Hound style role in stalking large game such as boar and deer.  Indeed some commentators still refer to this dog as a Hound but with the advent of the gun and field sport these adaptable dogs soon proved themselves as versatile and intelligent gun dogs.

The Weimaraner quickly garnered huge enthusiasm in the USA and where it became established as early as 1929. and the American Kennel Club recognized it as a breed in 1934. It remains at the very respectable position of 37 in the AKC 2020 breed popularity rankings .

Unlike Spaniels and many other breeds, there is no distinction between work and show dogs for the Weimaraner.

The Weimaraner is an incredibly striking medium-large dog.  With its unique silver-grey coat and mesmerizing amber eyes this dog will turn heads in any park.  The impressive  Weimaraner  gained the nickname “Silver Ghost’. Although this is not only due to its physical appearance but also because of its impressive speed and stealth in the field.

The Weimaraner, characteristically of the Sporting Group dogs, is extremely athletic.  This breed is generally very playful and not aggressive or dominant towards other dogs.  They can also get on with small pets like cats although early socialization is crucial.

Weimaraners are very intelligent.  They have accordingly gained the epithet of  the “dogs with the human brain”.  As a hunting dog in the style of the Hound this breed was required to be an independent thinker.  This independence and intelligence quickly translated into their being an incredibly adept gundog.  Their persistence and tenacity of hunting over distances remains.  Although these qualities are now apparent in dashing forward to flush out and retreive game birds

Weimaraners are affectionate and tactile but they tend not to clamber all over their owners.  But they are very human-oriented and this ‘grey ghost’ will happily haunt their beloved owners around the house all day and can be a little attention-seeking or needy.  The Weimaraner is a faithful and devoted family pet but be aware that they can be excitable and boisterous in play so interaction with small children should be closely monitored.

This breed are happy to be the only dog in a household.  They are inveterate chewers and benefit from hard-wearing toys, chews and beds

Although loyal and loving, these dogs have ingrained independence.  This means that with early training for separation anxiety they can cope relatively well with being left alone for a few hours.

Weimaraners also make good guard-dogs.  They will bark an alarm but only for good reason.  This makes them easy to live with as well as protectors of the household.

These dogs thrive on mental and physical stimulation.  This includes toys and games based around finding and retrieving.

This breed is an absolute delight for dog trainers as they can pick up a range of commands very quickly.  But they can be a little sensitive. Thus a calm, gentle but firm approach is recommended based around positive reinforcement.

The Weimaraner can be a good fit for first-time owners but they will pick up on any inconsistencies in training.  An inexperienced dog-owner would do well to attend training classes.

As you might expect with a dog equipped for both the marathon and the sprint, Weimaraners benefit from high levels of exercise.  This should include 2 or 3 hours of exercise a day including two good walks and this dog is exceptionally well-suited to anyone who enjoys jogging or outdoor pursuits such as hiking. It is a dog that will generally tire you out before it approaches tiring itself out.

This dog has elegantly squared proportions. The body being roughly as long as the height at the withers (or shoulders) with its belly neatly tucked up to further lend a sense of sleek mobility..   This lithe dog has a sloping back with a slightly curved tapering tail. The long, handsome face is set with striking eyes which can vary between amber, gray or blue-gray with high-set dropping ears which generally have a slight tuck or fold.

The striking coat comes in  varying shades of silver with both long-haired and short-haired versions.  The nose color is always the same as the coat color but can be long or short.  The longer hair does have some slight feathering on the legs.

Weimaraners are very low-maintenance in terms of grooming.  They do shed but not excessively and have an easy to maintain single coat.  This means weekly brushing will suffice.

This is another healthy dog with a life span of between 11 – 13 years.  They can  be affected by gastric torsion.  So it is recommended that they avoid intense exercise immediately after meals.  Some of the breed can occasionally suffer from Entropan.  Also Von Willebrand disease and  hypertrophic osteodystrophy.